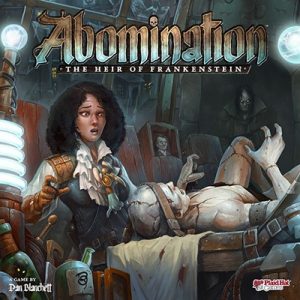 You know how board games sometimes inspire phrases and conversations that would (hopefully) never happen in real life? Abomination might be my favorite example of this.

“Remember that you have to pay off the police before you can murder again.”

“You want the most working body parts…kind of like real life, except you can use animal parts.”

“What does it mean to resolve a cadaver?”

Also, if you didn’t know about Abomination’s dark theme, you probably have a good sense of it after reading those quotes. This sucker is bleak at times, but in a way that (to my eye) never takes itself too seriously. Thus, the horror elements come with a winking, tongue-in-cheek humor that makes for a fun game night. Probably best to play with adults, though.

We’re going to talk about all of that, as well as the game itself. The tl;dr version, though, is this: Abomination has potentially problematic bloat in its mechanics and length, but hides that behind some delightful ideas and a legitimately thematic experience. The result is one that I think will split a number of gaming demographics, but can be quite enjoyable with the right group.

You’re a scientist who, willingly or unwillingly, is working toward recreating the work of Victor Frankenstein, at the behest of his former creation (who acts as your patron in the game). You’ll have to develop a reputation, hone your skills, and acquire…um…suitable parts for your experiments through a variety of means.

This culminates in the building of your own monstrous creation. Over several rounds, you’ll piece together a body and attempt to animate it, using the same methods employed by Frankenstein. Endgame scoring is as varied as you might expect from a modern Euro, but much of it is tied to the success (or lack thereof) of your creation.

To reiterate, the game may technically be PG, but the acts that are committed by all players are, to put it mildly, evil, creepy, and disturbing.

I don’t say this as a negative. Abomination actually gets bonus points for not pulling more punches with its theme. Want to substitute animal parts into your creation? Go for it. Want to pay the corrupt hospital worker to steal you some fresh cadavers? Done. Ostensibly, your Humanity (one of the game’s shifting metrics) keeps you from being too awful. You’ll straight-up lose up to 20 endgame points if you commit enough monstrous acts. But then, one of the variable player abilities you might draw is that you’re a psychopath and don’t lose Humanity for committing horrible acts. So even advice like “don’t murder too much” is more of a suggestion than a strict rule.

I enjoy this greatly. The game plays with its theme wonderfully, and makes you feel like a true mad scientist. But that same theme also might limit the audience. Again, that’s no sin, but it’s a consideration.

Components and Art – Form vs. Function

I’m not a components junky. But I need to mention them here, because there are some usability issues.

The artwork matches the theme, and this is usually to the game’s benefit, but occasionally to its detriment. Freshly guillotined corpses that show the severed head in its gory glory? Good. But a muted color palette for the component cubes that makes it a nightmare for color blind gamers (and even the rest of us, depending on the lighting)? Not so good.

Additionally, many cards are quite small, and the card text is even smaller. This game also asks you to read that really small text out loud at times. I’m not too old yet (I’m in my 30s), and if I wear my contacts (which are slightly worse for reading than my glasses), I can’t read the cards. We’re going to talk a little bit about Dead of Winter later, another game from Plaid Hat Games, and it has the exact same issue. I don’t want to assume willful ignorance of this problem, but I also can’t imagine they haven’t heard this criticism before.

Either way, this is bad. These are usability problems that should be a priority in the production process. The fact that they were ignored speaks to a lack of thought about the audience for games.

I’m far less forgiving than I used to be of these things. Designers and publishers should know better by now. And it’s a shame because it’s in a game that, outside of these issues, evokes its theme wonderfully through components and artwork.

On the surface, the game looks like a somewhat standard worker placement game. And yes, that’s still the game’s heart. Granted, the laboratory phase, which sees you rolling and mitigating dice to attempt to bring your monster to life, changes the feel somewhat from a standard Euro engine-builder. But even that doesn’t feel out of place in such a game.

But then the game makes a truly weird decision by introducing events into its structure. These events will sometimes affect everyone equally, but will sometimes affect a single player. Additionally, the effects can be good or bad, and are often tied to binary choices you make in the events themselves.

This is a direct lift from the “Crossroads” games (Dead of Winter being the most popular) that employ similar event cards. But with the Crossroads games, the events take more of a central place in the proceedings. Here, they seem more incongruous with the established mechanical trappings.

And yet, they’re some of my favorite moments of the game. Why? Because I dislike strictly mechanistic Euros that leave little to the imagination or to the capricious whims of Fate. Further, it’s a little hard to be too serious about this game with all its over-the-top gothic schmaltz.

So given the darkly humorous undertones to all of this, what better way to inject some narrative elements than, say, for Frankenstein’s monster to show up to your door with an ultimatum? How you react will affect at least you, and probably everyone, often in unforeseen ways. But it never feels unfair and it always evokes the theme just a bit further.

It’s a weird design decision; we’re not used to such randomness in our engine-builders. But the experience is made better for it.

It’s too long, for starters. At 4P, it can go every minute of the three hours the box says it may take. Slight bonus points for admitting to it taking that long (as opposed to the hundreds of games that underestimate their own length on the box).

But still. I’m ready to be done by the game’s end, and games that leave me wanting more are generally better than ones that slightly overstay their welcome.

This length is tied to the number of subsystems in play, and the complexity of the engine being built. I can’t identify one that I think is unnecessary. They really do work quite well together. But there’s a mismatch in complexity and tone. I want to be laughing and pseudo-roleplaying as I dive through the game’s nefarious actions. But instead, I’m having to turn inward to crunch multi-turn possibilities just a touch too often. The game’s “take that” mechanics give it more interactive heft than some worker placement games where space blocking is the only way to “interact.” So it’s not all number crunching, which is good. But sometimes it’s just number crunching, which isn’t great for some (myself included).

The length also reveals something else, and that is that you’ll be doing a lot of the same (or at least similar) actions over and over again. How long do a lot of our favorite worker placement games usually last? 4-8 rounds maybe? Here it’s 12, and that feels like a few too many in the longer sessions of this game (in fairness, it can end sooner, but usually not much before the final round or two).

Abomination: The Heir of Frankenstein Conclusions

Engine-builders aren’t my thing. And worker placement games and I have a mixed relationship. So when I say that I genuinely enjoy a lot about Abomination, know that it had to overcome those biases to earn my endorsement.

The game leans hard into its theme, which is its saving grace. It does this not just with the artistic trappings, but with how the theme is realized in the mechanics. No subsystem is there simply for game balance, but rather because it contributes to a game that will feel as though it contains a narrative arc as told through your actions, setbacks and triumphs.

I think probably the low number of variable scoring bonuses (there are only 6 and you’ll draw 4 in each game) will limit the creative freedom of players after enough sessions, and I feel similarly about the event cards, since there are only so many, and you’ll see as many as a dozen or so in each game.

So take all of that together with my earlier comments, and perhaps the chief criticism is that I don’t think this is a great one for numerous plays. That feels pretty damning, but I also don’t own the game…a friend does. So it’s not a huge issue for me, and I’m happy to play sporadically. But it may be a bigger deal for others who are considering a purchase.

Maybe more of both event cards and scoring bonuses will come in an eventual expansion, though my worry is that the same expansion would expand the mechanical complexity further. That’s not what the game needs, and it would push it further from what makes it work currently.

But it does work. It’s good to see my preconceptions challenged on occasion. “Long, engine-builder Euro with a lot happening on personal player boards” is usually a description that will put me to sleep. There’s still some of that to dislike here for non-fans of mechanistic Euros, granted. But it’s refreshing to see that there are designers willing to push outside the expected to see what twists can enliven an often predictable genre, and who are willing to pick a bold theme and stick unflinchingly to it.