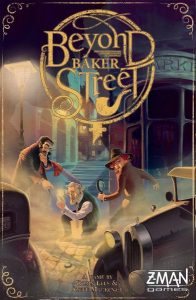 The Premise
The next in an endless string of Sherlock Holmes games (which I personally don’t mind), Beyond Baker Street uses the Hanabi mechanic, wherein you can see everyone’s cards except your own. There are 24 cards in the game, in four suits and numbered 1-6. In this cooperative game, you must give clues to other players, as they give them to you, in order to “solve” a case by playing cards of various icons (each with a matching color) to their appropriate pile (to solve for things like Motive and Suspect).

Additionally, you must eliminate cards to The Impossible (owing to the famous Holmes quote) before ultimately solving the entire case. This provides a lot of options on one’s turn, but also a lot of agonizing choices. Each clue given – and each card played to The Impossible beyond a certain number of cards – will move Holmes closer to solving the case, acting as your “doom clock” for the game.

The game plays fairly quickly, only has a few actions you’ll be taking throughout the game, but demands a fair amount of inference and deduction to solve tough cases as you race to get there before time runs out.

The Components
For a card game that probably only “needs” a stack of ~50 cards, the board it comes with, as well as tokens and the cards themselves, are great. None of it feels unnecessary either, and the added components give a more epic, narrative sweep to a game that otherwise could easily feel more like the filler that its play time suggests.

How the Game Plays
If you’ve played Hanabi, you understand the central premise. I’ve heard the designer doesn’t actually like the comparison to Hanabi, but I’m not sure why, because this is Hanabi…but with an actual, honest-to-goodness game built around it. That should hook a lot of players.

The different areas you need to solve for make this feel like an actual case to solve. I’ve heard this can feel abstract to some, but I actually think it feels about as thematic as one could expect for a card game that plays in under 30 minutes.

Longtime gamers will also know that in games like this, there are clues, and then there are clues. Some things that you’ll say will have layers of implied meaning embedded in them, and your friends’ ability to decipher these meanings can make or break a session. This can make it frustrating for those without experience in such games, but immensely satisfying when a clever clue is correctly interpreted.

Difficulty and Modularity
I haven’t talked about player ability cards and the different cases. Both of these add significantly to the game, and represent ways to cater the game to your group. I like these kind of elements in games.

Optional player powers can be dealt out. Most are beneficial but a few actually make things harder. Whether you pick them deliberately or deal them out randomly, they’ll give each player a particular blind spot or ace up their sleeve, which can subtly but meaningfully affect strategy.

Additionally, there are six different cases, each progressively more difficult. I’ll be honest: I don’t know how you’d beat #6. The hardest I’ve ever beaten is #4, and that was after we removed detrimental player ability cards as options. However, I won’t assume everyone is as inept as I am, and I do love how these cases allow you to tailor the difficulty to your group’s experience. If I’m home for the holidays, playing with my niece and nephew, we’re on case #1 and each have beneficial powers. If I’m playing with my gamer friends that all know the game, we’ll be on case #3-4, with randomly drawn powers.

It means that there isn’t a single player type that this game will be for. It can be – and is – for many gamer types, and can cater to each.

Who Won’t Like This
If you dislike memory-based games, this one rewards that skill. Also, some simply don’t enjoy co-ops. Otherwise, this is lightweight enough that it will struggle to completely turn off most gamers.

The Verdict
Obviously, no game is for everyone, but this has become one of my standby games that is unlikely to disappoint, and has a reasonable chance of being really tense and stimulating in any given session.

The ability to match the difficulty to the group’s experience is also a blessing. I can feel confident playing this with nearly anyone as a result.

All non-branded images used have been obtained from free-use sites and are released under Creative Commons CC0. Blog entries may be reprinted with attribution. © All rights reserved on name, logo and BTD branded elements.