A funhouse dungeon set in Waterdeep 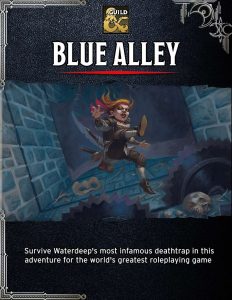 Created, it seems, somewhat explicitly to accompany Waterdeep: Dragon Heist, Blue Alley is a funhouse dungeon for an APL 2 party in 5th edition Dungeons & Dragons. Headlined by writer M.T. Black, it features a number of DM’s Guild luminaries who have, at this point, received some sporadic credits writing for official Wizards of the Coast products.

Blue Alley is established in the lore, having first been invented by Ed Greenwood back in the Before Times. It’s a proving grounds of sorts for aspiring adventurers and is refreshed periodically – much like an escape room – by a mysterious wizard who runs a gambling ring as people watch adventurers traverse the dungeon.

It’s also smack in the middle of the metropolis of Waterdeep, making it a bit of a goofy foil to its surroundings.

The Good in Blue Alley

There’s a fair amount of good here, so let’s get to it.

The Not As Good in Blue Alley

The purpose of play, for me, is simply to have fun, and I think this one does that. It never takes itself too seriously, despite offering a challenge, and I think many groups will appreciate both of those elements.

If we look at the meta-context of its place in many Dragon Heist (DH) campaigns, it becomes even better. The DH adventure is sorely lacking fleshed out side quests that can act as city exploration or faction quests. This can seamlessly act as either.

I suppose “{X product} isn’t good in this area, so that makes {Y Product} better” is problematic from a critiquing standpoint, but in practice, I was personally thankful for Blue Alley’s existence and would recommend it to a DM running either Dragon Heist or a Tier 1 campaign set in Waterdeep.

This is $4.95 on the DM’s Guild. The preview is four pages, but doesn’t include anything of the actual dungeon.