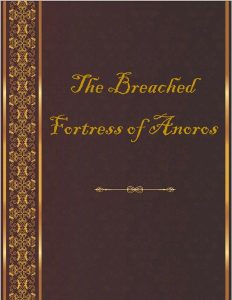 Background
The Breached Fortress of Anoros was a community project on RPGGeek. Having been a part of one that I enjoyed wildly, I wanted to go back and check out this previous project, which was put together before I was a regular on the forums.

The book is a classic dungeon environ, and as far as I can tell is designed to be system-neutral. As an ancient, ruined and corrupted fortress, it will fit snugly into nearly any fantasy setting.

Intro & Surroundings
There’s a rather detailed historical intro that gives the reader (presumably, the GM) a lot of history that may or may not be useful during play. It’s certainly evocative, though. A lot of adventures could be written within the historical backdrop that is created around the fortress.

Next is a description of the surrounding areas, including a village. There is a random table that details some wandering encounters in the dungeon. There is also a random adventurer chart, since the players might bump into a fellow adventurer. Each of these has their own reason for being in the fortress. I like this, and don’t see enough similar tables in adventure books. If I were running this, I’d almost certainly include at least one NPC from this table, to help bring things to life.

Map
The map is by Dyson Logos, who has done plenty of professional work. His style is very old-school, and I’m a fan of it for running adventures. There are fancier map styles out there, but his are eminently functional, which I appreciate.

The Dungeon
There’s a bunch of ideas in this adventure that range from very clever to entirely serviceable, so let’s just get that bit of praise out of the way and talk holistically…

Because this is a group project, I expected a lot of “event” rooms where contributors laid out their Big Idea, creating a fun but disjointed experience. This is not entirely the case, though. Or rather, there’s a little bit of that, but care seems to have been taken to maintain an internal logic to the place. Or at least as much internal logic as any cramped dungeon with multiple monster types. Usually this is done by linking the denizens or descriptions of the rooms to the history of the place. This common backdrop isn’t omnipresent, but it shows up enough to remind you of the dungeon’s former use. Additionally, everything that isn’t explicitly tied to this history still feels like it would exist in a decaying citadel like this. So, as mentioned, it will fit right in with any number of both classic and modern dungeons. Several authors also include notes of what might happen in nearby rooms as a result of events in theirs, which ties things together and makes the dungeon less static. And I found myself finding justifications that required very little mental strain for the small inconsistencies that crop up as a result of the multi-author process.

The tone and writing style is, by virtue of how it was constructed, different at times. If this were being put up for sale, it would ideally be run through an editor to smooth out the style. But that wasn’t the goal here, nor does it suffer much from it. And I won’t get into usability like one of Bryce’s excellent reviews; I’m far from an expert there, and wasn’t reading the adventure from that perspective, but didn’t feel that any of the descriptions were overwrought.

The one thing I’d like to have seen is more of an overarching purpose for venturing into the dungeon. As I read through it, my mind naturally ran through potential scenarios, but I realized at the end that I wasn’t sure what my hypothetical adventuring party was doing in Anoros. The intro talks about villagers crying out for heroes to purge the fortress of darkness, but it’s not clear that there’s a Big Bad here. Rather, it acts more as a hideout for several entities of varying levels of malevolence (and a handful are quite neutral). Plenty of potential hooks, but no single one that is the most obvious. A random chart with hooks, tied to the dungeon’s various inhabitants, to get PCs into Anoros would be all that’s needed, and I think it would tie together the book nicely.

Conclusion
Anoros is a dungeon with a clear sense of historical presence, which will give it enough weight to thrive in a campaign even if you have to adapt some elements to your setting. It has a handful of standalone rooms that could easily be ripped out of this adventure and inserted into another. This is neither good nor bad in and of itself, but it gives the book multiple potential uses.

I’m personally a fan of the slime room (Area G, created by RPGGeek User Cosine) with the odd pig creature, and will likely run a variant of it at some point. A couple others have inspired similar musings that may result in me adapting them. Other GMs will likely find a few they enjoy, or will be able to keep everything as-is, because it won’t clash with the vibe of most fantasy settings.

There is a slightly different standard that I hold these projects to, not only because they’re free, but because it’s a volunteer-based project not intended for commercial use. If this were a commercial product, I’d like to see a handful of things in it that it lacks. But as a “let’s throw some ideas together and have fun” project, there are frankly worse commercial products that do exist out there.

Either way, I recommend this. It’s free, and you’re getting quality ideas from the minds of several accomplished gamers and creators. I hear some hack named Mark joined in for later community projects, so the quality of these projects undoubtedly took a nosedive. So this adventure is an excellent way to avoid his nefarious touch and see what the fine folk here on The Geek have created.