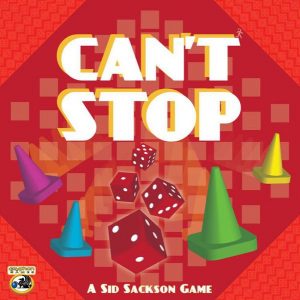 If you like press your luck games, Can’t Stop will be enjoyable. If you don’t, it won’t.

If you want to stop reading, feel free. There’s usually more nuance to reviews, but I’m not sure anything I’m about to say will do more than extrapolate on those two sentences.

One of my favorite games is Cockroach Poker, but in order to like it, you have to like bluffing because that’s all it is. It takes the tense final moments of a Poker hand, where you’re staring into the person’s eyes looking for a hint, then going with your gut. The result is always dramatic. The game is that moment, over and over again. Maybe it would become tiresome if you play too often, but for fans of the particular rush it provides, it’s like a drug.

So too with Can’t Stop. It’s the most distilled version of “press your luck,” and nothing else. There’s the mild (or major, in the late game) heart attack while your dice come to a stop, or your opponents’ dice, but over and over.

I’d get tired of Can’t Stop eventually. There really isn’t a whole lot going on in it, and yes, it’s subject to wild swings of luck. But that’s why I don’t play it super often. I’d argue that its simplicity is also why it’s lasted decades in the gaming zeitgeist while others have fallen into obscurity. If adding elements to a game obscures its central tension, or doesn’t add to it, it’s not as good of a game. I’ve reviewed a couple press your luck games recently that suffer this exact flaw. They have “more” going on in a literal sense, but no single moment that’s any better than any other press your luck moment. So the “more” becomes extraneous.

If you’ve never played, it shouldn’t be too hard to find a copy or find someone who has an old copy stuffed into their closet or basement. If anything about the genre and its goofy fun appeals to you, I encourage you to do so, and to give the dice a roll.