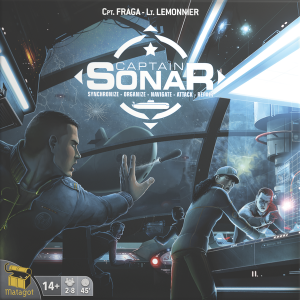 Captain Sonar is an audacious, real-time version of the old classic Battleship. The games holds up to eight players (and really should be played with at least six), and has a commensurate amount of complexity to accommodate this player count.

A large screen separates two teams. A Captain barks out orders in an attempt to sink the enemy’s submerged vessel before they are sunk. A Radio Operator listens to the opposing Captain, and using a grid map of the play area, attempts to deduce where they are. A First Mate readies weapons, remote mines and tech devices that the Captain deploys to either deal damage to the enemy ship, avoid detection, or to glean information that the Radio Operator can use to hone in on the enemy position. The Engineer, meanwhile, is trying to keep everything running, and will eventually be the bearer of bad news as things start to break down. This eventually requires “surfacing” which reveals your position to the enemy but allows you to repair damage in a frenzied group exercise of drawing between some lines, which usually takes about 20 seconds.

The screen is gigantic and cool. The varying play maps are nifty. All the individual stuff you’re drawing on is dry-erase and very functional. Everything gives you the feeling that you are playing something with heft and importance, even if it’s just a bit of inspired chaos.

For something that can be described as “team Battleship,” there’s a remarkable amount of ingenuity here. The hobby is only just starting to iterate meaningfully on the truly groundbreaking gameplay model that Captain Sonar introduced.

And at its best, the game plays out like the most frantic, tense game of cat & mouse you can imagine. It sits on a knife’s edge between chaos and calculation as you and your teammates try to work together while the looming specter of the enemy is omnipresent.

It’s rare when you can say a game introduced something truly unique into board gaming, but this does just that. For that alone, Captain Sonar deserves some praise.

There is a turn-based variant, and I’ve played this exactly once and found that it sapped most of the excitement out of the game. At that point, it’s a reasonably good hidden movement game that becomes more tactical, but the reason this game made a name for itself is the real-time mode.

Which leaves the problem of player count. You can play this game with two, or four, or six. But something is missing unless you’re in real-time and at the full eight players. The problem is that any more is impossible and any less is less than ideal.

I unashamedly enjoy this game, but it’s with a sizable caveat, which I’ll get to in a moment. Each of the four roles is very different. This can be great when you’re trying out the game, but then you’ll likely develop a preferred role or two, as well as those you don’t like as much. This creates the issue where you may get stuck with a role that bores or overwhelms you.

So for me, I get a little bored with the Engineer or First Mate, and am overwhelmed by the Captain role. I love the game, but only when I’m playing as the Radio Operator. This is a pretty narrow window when, ideally, I’m opening up that role for others on occasion. Some have tried to fix this by usually playing with six, with one player acting as both First Mate and Engineer (which are usually seen as the less complicated roles). But they simply aren’t as fun for some, even when combined.

The counter-argument to this is that the less demanding role(s) like First Mate are ideal for newer players or those who can’t handle the fever-pitched pressure of some other roles. Sometimes this disparity in roles is a great thing. Other times, not so much. It will vary largely depending on the group.

“It depends on the group” is technically true of any game but is worth emphasizing here, because, for example, you might find eight players who all love the game, but if four of them prefer Captaining and the other four prefer Engineering, you’re playing a game where half the players will be a touch disappointed from the outset.

Toss out everything I just said above for a second. Here’s a question: do you enjoy feeling pressure in games? That’s the true gauge here. Because, yeah, there are considerations about role and player count that are salient to any assessment of the game. But when it comes down to it, if you’re playing with an engaged group, you’re likely to be swept away in the yelling, the sighs of relief, the second-guessing, the frantic pace, all of which bears down on you like the water your hypothetical submarine is submerged under. It’s brilliant and addictive if you enjoy that sensation, and terrifying if you don’t.

Matagot released a follow-up title, Sonar, which is clearly aimed at some of this game’s criticisms. I haven’t played it yet, though I hope to. However, I don’t have high hopes, because it’s entirely turn-based. I’m sure it cleans up some things and is a pleasant game. But I play Captain Sonar for the euphoric highs and lows it brings, which will never entirely be replicated without the real-time cauldron it stews within.

The game will get loud, so there’s that. If you aren’t a fan of pressure-filled decisions or having to make quick decisions, this will again be a pass. You’ll also want at least six to play, and ideally eight, so smaller game groups or, say, gamers who mostly play with their spouses won’t even want to consider it.

Captain Sonar is one of the more curious games in my favorites not just because of its unique design, but because my enjoyment of it is so specific that it seems hard to recommend even to fairly like-minded gamers. And yet, the thrill of landing a winning torpedo blow on an enemy sub in this game is one of the highest highs I’ve experienced in the hobby. That’s not nothing. If you haven’t played it, though, I highly recommend you try it out if you have the chance, if only for the novelty of realizing just how far in unique directions our hobby can extend.