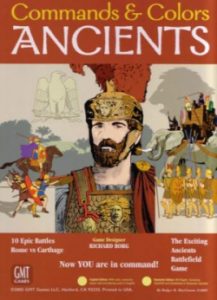 Commands & Colors: Ancients is one of the few wargames you’re likely to see me cover. I don’t lack for some cursory wargaming experience. But it’s not a deep love of mine, because many wargames represent the need for specific and sustained commitment to them in order to plumb their depths.

You could argue this of many hobby games. But the experience of play is more immediately accessible in even complicated hobby games, many of which are designed to be enjoyable and on the first play, even if the greatest joys lie further in. Conversely, it’s not a coincidence that wargaming is often considered a “lifestyle” wing of the board gaming hobby, requiring more time and effort to even experience it in a surface-level manner. Perhaps some of this framing is illusory, but I’ve found at least some of it to be true. It’s opaque and intimidating even to some gamers with decades of experience.

But “introductory” wargames appeal to me. However, let’s make no mistake: Commands & Colors: Ancients has more rules crunch and depth (both tactical and strategic) than many other games I’ve covered. It’s an “intro” game only compared to the larger wargaming environment in which it exists. This, however, makes it a good one to assess that is neither too shallow for sustained play nor too dense for broad accessibility.

The Gameplay, In Brief

Tactical combat on a hex grid via card play and dice rolls. A number of randomly-drawn cards in your hand will dictate what you can do (e.g. “Order 3 units on the left flank,” “Order all foot units attached to a single unbroken line,” etc.), and combat is handled via dice rolls, with various modifiers and levels of success depending on troop type.

The nuance comes in how you craft your strategy around available cards, and how you manipulate positioning, terrain, flanking, and your leaders (which confer considerable bonuses) to edge the battle in your favor.

Systems Instead of Games

Commands & Colors (C&C) is a system, not a game. Of course, it’s a game in every meaningful sense as well. But there isn’t a single experience you can point to and say “this is it” like you can with most games. And that’s because C&C is a series of historical scenarios, each with different troops, terrain and setups.

No single scenario is C&C. It must be absorbed in the aggregate. This becomes even more nebulous with additional games in the C&C series, covering different historical periods. There are new rules to facilitate changes in historical warfare, but the core gameplay is the same.

This is a modular approach to game design that is often seen in wargaming systems but rarely seen in more mainstream hobby games, which will at best feature some variable setup features or variable player powers, but packaged into the same basic experience.

This modularity gives birth to infinite variability, the likes of which most games (even some wargames) can only dream of.

The other beauty of the system is that it’s typical to play both sides of a battle in a single “session.” Reason being, some scenarios – just as with some historical battles – are lopsided toward one side or another. So winning as the favored side is better than a 50/50 proposition. But in playing as both sides, then adding victory banner totals from both for your final score, you can play imbalanced scenarios and still have a balanced game. Brilliant.

Concessions must be made for wargames that I might not make for all games. Reason being: they’re aiming for some measure of historical representation. Granted, all gaming is abstracted, but to evoke the history effectively, the mechanics must feel believable to the historical truths behind them.

This occasionally necessitates some odd rules that would be fiddly or counterintuitive in, say, a more generic fantasy wargame. But merged with the historical backdrop, they lend context to the battles that took place.

That occasionally arbitrary fiddle is here at times. You’ll need a reference sheet for troop stats even after numerous plays, for example. But the stats all fall into the same mechanical ideas. So it’s perhaps time-consuming at times, but never confusing.

So, for example, I might not remember if Medium Cavalry can advance + attack after a battle or only advance with no attack. But the rules for advancements and attacks don’t change. So the unit types don’t add rules (usually), but merely slot into the existing mechanical structures. This, then, allows the depth to emerge from the nuances inherent in these variable stats, not because each unit acts wildly differently.

Over time, the brilliancy of the system reveals itself, because with only a handful of modifiable stats of this type, battles take on vastly different feels depending on troop type and terrain. This goes back to the modularity of the system I mentioned earlier. And it’s why the system doesn’t break down even when modeling entirely different periods of history.

For clarity, the occasional one-off rule for a unit type does annoy me on occasion, particularly when mixed with the frequent referencing of stat values for units. There are just enough of these moments that the game doesn’t entirely meet with my preferences for streamlined gameplay. But the purpose behind these additions is purposeful, not arbitrary, so I am more forgiving of them than I might be elsewhere.

There are perfect-information, deterministic warlike games. But I’d argue that they don’t do a great job of simulating the feel of war. For history’s leaders, nothing was entirely certain, and history is rife with battles that turned on some random chance, without which battles or entire wars may have shifted.

However, history is similarly rife with accounts of intelligent and/or charismatic leaders overcoming superior odds and the whims of bad fortune through savvy tactics and clever stratagems.

I’d argue that the best wargames need to capture both of these things to truly feel authentic. C&C does so.

The double-edged sword of that statement is that it means some battles will be won or lost primarily on the rolls of the dice or draw of your cards. These are the forces of chance that no leader, however clever, can fully mitigate. This will rankle the sensibilities of some gamers who don’t enjoy that loss of control, while it will thrill others who don’t mind a roll of some dice deciding their fate. At some point, for example, your own elephants will do you in, stampeding over your forces and softening them up just enough that the enemy can break through and destroy your units’ morale (and lives). Whether or not this possibility excites you or scares you is, perhaps, a good indicator of how much you’d enjoy C&C.

The good news is that ample opportunities exist to mitigate this luck, allowing it to work in your favor. Mastering fate, as it were, is the challenge of the game. It’s an unsolvable challenge, but maneuvers that result in victories always feel satisfying as a result.

It’s here that the nuance inherent in the tactical system begins to shine. It’s not just the eminently flexible modular elements of the system that are impressive, but how subtle many of the tactics are in how they confer advantage or disadvantage. Thus, changing a few variables, as the game’s many official scenarios do, changes strategic considerations drastically.

Will capricious Fate still stifle some brilliancies from you? Yes, of course. But this is as it should be. As in life, superior play is not always rewarded with success. However, it usually is, since the game balances its tactical importance with such caprice, meaning that in the aggregate, veteran players and dedicated students of the game’s historical underpinnings will be rewarded more often than not.

The board will look barren to some, and the terrain and pieces will seem blandly minimalistic. Personally, I enjoy this aesthetic. It focuses one’s attention on only the important elements of the battle, not the aesthetic trappings in which they exist. But not all will agree with that assessment.

The counterpoint is that the more vibrant terrain elements of something like Memoir ‘44, also from Richard Borg and in a similar mechanical system, add a dynamic that’s missing from C&C:A. The comparatively austere battles of Ancients are historically accurate – battles usually took place on relatively flat terrain – but something may feel lost in comparison to Memoir.

Some have said that setup and teardown are a bit of a bear occasionally. No big deal, but there it is. Moving on.

Several community-made scenarios exist for the game, as well as official expansions that generally add a new unit type or two and a host of new scenarios. The base game comes with about 15 official scenarios, most of which are quite replayable (a few seem designed for introductory play, and will likely be ignored after a while for some). You could look at this as glass half full or half empty. There are limited scenarios as-is, but functionally infinite scenarios with some additional work. YMMV.

Lastly, if you are uninterested in the historical period (Carthage/Hannibal vs. the Romans for much of the base game), you’ll struggle to fully invest in the scenarios. That flavor is at times necessary to contextualize what would otherwise be arbitrary troops being hurled at one another.

I prefer tactical play to long-term strategic planning. Both are fun, but the brutal swings of tactical maneuvers, and the adaptation it requires of even the most well-prepared gamers, appeals to me in ways that many more sprawling, high-level wargames and area control games don’t quite manage. I want to be in the mud, not surveying continents with an eagle’s eye.

So the C&C system appeals to me in ways that some wargaming doesn’t. It also abstracts the historical aspects just enough that it retains both broad historical accuracy without devolving into too much simulationist granularity. More abstract games of this type start to feel like Chess with extra rules to me. Less abstract and more simulationist, and it starts to feel like work, not fun.

Thus it exists in a sweet spot for me, and may for you as well. Additional permutations of the formula exist for other historical periods in Richard Borg’s excellent Commands & Colors series, which includes entries featuring medieval warfare, Napoleonic warfare, and even samurai warfare. And though it loses the C&C moniker, the older and even more popular Memoir ‘44 is in this lineage as well. Those each come with various changes and additions, but the core is roughly the same. Meaning that if you like the concept but not the historical period, other options exist.

Overall, I’m glad to have discovered C&C, and glad that Ancients was my intro to it. I expect to enjoy others in the series as well to varying degrees, and can recommend it to those whose hardcore wargaming credentials might be as spotty as mine, but whose interests overlap with what tactical wargames bring to the table.