Barovia Goes to the Birds: Curse of Strahd Session #2

Welcome to my Curse of Strahd session report series! This is part of several installments that will take you through the entire campaign from my (and my character’s) perspective.

This follows my blog post on Writing Good Session Reports, which I’d encourage you to check out. These reports don’t always take my own advice, but it was in writing many of them that I formed tactics for getting the most out of them. Enjoy!

Previously, the party had been lured to the land of Barovia with promise of renown and riches for saving a young girl. After an odd encounter with two children in a deserted town, we found ourselves at a house on a rescue mission for their baby brother Walter. When we left off, we had seemingly found his nanny, Marta, who shed her skin and shrieked at us before lunging toward Gwaihir.

Death House – Third Floor
Finding it difficult to hurt the newly incorporeal nanny, we’re nevertheless able to dispatch her without taking much damage. During the fight, Aial uses her beast shape for the first time, turning into a dire wolf that mimicked the wolves we had encountered earlier.

Upon killing (if such things can die) the nanny, we find ourselves trapped in the house, whose doors have locked and whose windows – one of which was busted by Ahk-wa during the fight – have mended and shut. Inspecting the house for a way out, and any other useful items we might come across, we find a “baby bundle” in a nearby crib, but with no baby. Finding a bedroom, Gwaihir and Landroval find some jewelry and gems, and Landroval enters a closet to retrieve some soap to drop down a dumbwaiter at the room’s far end. In the closet, he’s accosted by an animated broom. A couple of the party flail at the broom – while Ahk-wa watches in amusement – and they eventually just close the door and leave it there. Gwaihir also finds a sewing kit.

Attic
Choosing to go up instead of down, the party heads through the secret door they found behind the odd, magical mirror.

In the attic, they find it dusty, with covered furniture and chests, and a single locked room. Exploring the rooms, they find a corpse that they’re able to identify as Marta, the nanny they just fought. Opening the locked door, they find bodies of what they come to discover are Rose and Thorn, the two children they had spoken with in the village outside. Ghosts of the children confront them, and implore the party to stay with them and play. They also find a chest of toys and find a near-exact replica of the house they’re in, which they’re eager to inspect. Gwaihir plays a tune for the ghost-children, who listen intently, and Ahk-wa produces several toys for them to play around with. While the music plays, Ahk-wa rifles through the replica house, learning its layout, and uses Landrovar’s knife to cut out the basement portion to get a look at it as well.

At this, they hear a door open outside, which they eventually learn leads all the way down to the basement of the structure. Upon trying to leave, the children are distraught, and Thorn tries to possess Landrovar. He is successful, and Landrovar feels himself becoming deathly afraid of nearly everything in the house. Rose tries the same with Gwaihir but is rebuffed and she remains magically trapped in the room. Then, realizing that perhaps the ghosts are bound to a body, Gwaihir and Ahk-wa return to the room to retrieve the bodies, which are little more than skeletons at this point. They wrap them each in a blanket and sling them over their respective backs, before heading downward. Having seen a library in the replica house, the group wish to see if they can learn anything about the house – and perhaps escape – before traveling to the apparent monster in the basement.

Second Floor
The second floor produces the most insight, as the brothers are able to discover a fake book leading to a hidden room in the library. They find yet another skeleton-corpse with a letter in its grasp, a chest, and some (studded) leather armor that represents an upgrade for Ahk-wa. Having taken point on most of their excursions, in order to shield her skilled but less physically hardy brothers – she suspects that she’ll need the extra protection. Landrovar finds a cultic book on the Priests of Oscibis [sic?] that leads him to suspect some form of summoning ritual contained within it.

Gwaihir reads the letter. The corpse is apparently the house’s patriarch, and the letter is from a Count Strahd von Zarovich. The letter mocks him for the darkness he has brought upon his own family, and we learn that – most likely – Walter was a stillborn son conceived out of wedlock with Marta, the nanny. Strahd refers to himself as “your dread lord,” and the brothers search for books mentioning him, or the lands of Barovia. They are not terribly successful.

We also find the deed to the home (which Gwaihir claims and Ahk-wa seems annoyed by), and a windmill. Interestingly, the house is filled with windmill iconography and symbols. We take a short rest; Landroval eats a muffin, while the sisters eat from their birdseed pouch.

Lastly on this floor, we find a music room that is ornately adorned. Having found a Barovian waltz in the library, Gwaihir plays it at a piano (?). Ghostly apparitions dance to the music throughout the room, and all the siblings watch on in awe. When he stops, the shades eventually disappear. “Some unique beauty among the death, at least,” remarks Ahk-wa.

First Floor
More searching in “our” new home, and we find a longsword over the mantle, with a windmill symbol in it, a kitchen wherein the brothers take a few bits of silverware, and a hunting room that interests Ahk-wa. In it, she cuts some animals furs from the furniture to use in her garb. There are also two cupboards – one locked that presents an embarrassing challenge for the siblings…only Aial in her bear form is able to bash her way in. In it they find varying sizes of crossbow (and accompanying bolts), which they distribute among themselves. There is also some wine, which hasn’t yet gone bad, and some tobacco and pipes. Gwaihir enjoys the latter, while all enjoy at least a sip of the wine.

In a closet, the brothers also find some fancier clothing, including a top hat that Landroval takes and enough black cloaks for the whole group. All bu Ahk-wa take one.

In a last ditch effort to escape, Aial rages toward the front door of the house, crashing into it in an unsuccessful attempt to escape. Out of options, the group heads back up to the attic, only to go back down to the basement.

Basement
The first things the group encounters are tombs, and they happen upon tombs for Rosevalda and Thornvald, likely the children they had met earlier. They attempt to pry open the tombs – a task that only Ahk-wa is able to accomplish with the aid of a crowbar (and, amusingly, the dice stuck to the “weak spellcaster” narrative by making the brothers’ at-advantage rolls with the crowbar extremely low). The tombs are empty, and, having sensed no ill will from the ghost children earlier, we place their skeletons in the appropriate tombs. At this, Landroval feels his possession lift and feels himself again. The last thing the party hears is Rose’s fading voice as they place her remains in her tomb. “Thank you for playing with me…” she says sweetly, leaving the party to journey deeper into the dark basement.

I was excited that the house decked me out a bit with gear. I’m not a power gamer, but it’s impossible not to feel that small endorphin rush when you get some cool loot. Between the armor, sword, and heavy crossbow, I made out well.

End to Beginning
We started in the part of the house with all the threats, and progressed to the lootable portions with backstory on the house, which made for an amusing inversion of a non-aarakocra group’s path through the house. I can’t wait to accidentally stumble into some threat that’s way beyond our level in Strahd’s castle. Hopefully the worst things there are in the dungeons, not the towers, but I guess we’ll see. Otherwise, hooray for flight!

Thinking Like a Player
I was (light-heartedly) chastised by our DM for asking some “behind the screen” questions after our session, which was a good reminder to start thinking more like a player. From Ahk-wa’s perspective, whatever happened is the only thing that could have happened, and getting into that mentality as a player will undoubtedly help my roleplaying.

Note-Taking: Mind Maps
I promised some progress on note-taking, and spent a bit of prep this week establishing how to approach note-taking. One popular practice for things like memory retention and new language acquisition is mind mapping. A Google search will yield better descriptions than I can offer, but the basic idea is that it groups notes into interrelated events or concepts that mirror how our minds work. Thus, it’s better than a list, however detailed we try to make it.

Below is a picture of my notes. I have a long way to go, and I’m not an artist (“best practices” for mind mapping include using illustrations), but you can glean the intent. I also got sloppy and stopped linking things to a central idea (in this case, the floors we were on), eventually opting for a linear A-to-B-to-C structure. So there’s room for improvement, especially as I develop shorthand symbols and words. But I definitely remembered more. 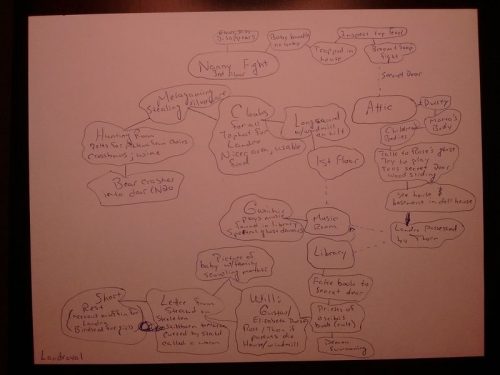