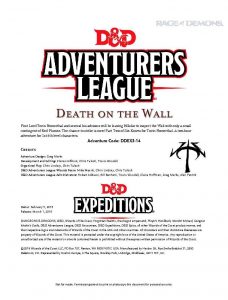 Death on the Wall is not a uniformly great adventure start to finish, but it does a couple of great things in my opinion. I write this review not as a holistic endorsement of it, but to shine a spotlight on the reasons I love running it.

For an allegedly 2-hour adventure, it’s initially alarming to see this clock in at 31 pages. However, much of it is Adventurer’s League (AL) bookkeeping. If you’re running it as a one-shot, the first sections that will be at all relevant to you will be at the end of page 5. Everything preceding is notes on AL play. I’m not reviewing this as part of that AL continuum of adventures, but rather as fodder for one-shots or inserting into a campaign.

The premise is that there’s a pretty bad warlord running amok, and players are a part of the resistance. The characters are to scout for places for the resistance to hide out and/or retreat to. However, this all goes awry within the first scene of the adventure.

It starts – where else? – in a tavern with NPCs, rumors, all the tropes. But then a hero of the resistance bursts in frantically, throws a backpack to the PCs, then rushes out. Moments later, troops of the bad guy burst in. Suddenly, the tavern has become either a social maneuvering scene, a fight, an escape, or some combination of those.

The contents of the backpack, as you might suspect, change the hook. A note details the current movements of the enemy leader. And he’s comparatively vulnerable right now! And the characters are the only ones who can get to him in time!

Ok, so there’s something forced about all of this, but I like how it quickly makes the usual zone of comfort (a tavern) into the front lines. I also like how it throws them directly into the hook. The action comes to them, not the other way around. If you’re running a one-shot, this is great for moving things along.

The backpack also has a bunch of stuff for creating shenanigans. Some rope (yawn), a crowbar (meh), a uniform of the bad guy army (now we’re getting somewhere), tinderbox and five flasks of oil (awesome), and my favorite of the bunch, three vials: one with a green dot painted on it, one with two green dots painted on it, and one with a yellow dot painted on it. Hilarious in its mystery. And what do you want to bet that they’re about to get a chance to use all of this stuff?

The adventure quickly shuttled you to the encampment of the enemy leader, which is not impregnable but will require some planning. If only we had a tinderbox and oil, or an enemy uniform, or…

So ok, if they avoided combat in the opening scene (a distinct likelihood), within maybe 15 minutes of starting the session, the players will be on a hill overlooking their entire objective, with a bunch of fun tools at their disposal to make a plan and watch it succeed or flop.

The encampment has spiked walls, guard dogs, roaming patrols, and more. It’s elaborate, but it’s very contained. And this is the beauty: the majority of the session will be players planning their daring assassination and executing it, for good or ill. And make no mistake: the possibilities suggested by the items in the backpack aren’t their only options. They could just as easily come up with their own convoluted plan. The adventure even outlines some possible avenues to creating makeshift allies within the encampment, and how they might leverage those relationships. There are also notes on guard shifts and what will be happening on a day-to-day basis until the leader leaves the encampment, opening the possibility for multi-day plans that are slowly unfurled.

This is the sort of thing I love, because it’s a microcosm of what’s great about sandbox structures. You have a defined goal, but limitless ways to approach that goal. If you ran this six times, I’d be legitimately surprised if you didn’t end up with six wildly different methods and outcomes. Even if the ultimate outcome is “the leader dies,” it’s getting there that’s the fun part.

I glossed over the larger conflict here, because I frankly don’t care about the entire AL story arc, but this does indeed tie into a larger plot if you wanted to lift it.

There’s more faction-related bookkeeping at the end, as well as creature stats (nothing new compared to the official manuals, just redundant stuff to make the adventure more self-contained) and a number of appendices and handouts.

The handouts are fine for the one-shot and are functional. The map is amusingly – but also depressingly – amateurish for something that’s officially tied to Wizards of the Coast. I could sketch it in a notebook in about 15 minutes and likely do just as well. Wizards, I assume you have the resources to easily and cheaply do better. Pay a freelancer a few hundred to sketch something semi-professional and you suddenly have a much more evocative visual setting.

Death on the Wall: The Verdict

You’re going to have to ignore a lot of things here to make it fit a one-shot, but cutting stuff is comparatively easy. If you want to work it into a different plotline altogether, that’s going to be trickier, but won’t be impossible.

The point, though, is that there’s a core here that is very, very solid. The concepts I outlined above are ones I think work well for many adventures in general. Death on the Wall is a nice distillation of them, so it’s a good case study for analyzing good design. I didn’t touch on individual descriptions, NPCs, etc. because that’s not really the point. Most of it is serviceable here, but not as compelling as the central hook that those elements exist within.

In all, this is one of my favorite one-shots because when I’ve run it, I cut the Adventurer’s League chaff from its hide to reveal the brilliant minimalist sandbox at its heart. Then I chew on that heart Khaleesi-style until there’s blood dripping down my chin, and my enemies are wondering why they ever messed with me. Or something like that.