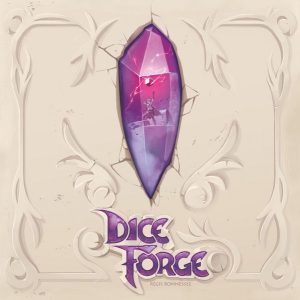 Dice Forge is a gimmick game. I don’t mean that in a bad way. It’s true, though. Strip it of the dice-building mechanic, and you’re left with a fairly familiar engine building game with a handful of resource types (in the forms of chits to attach to various sides of your dice) and card buys that translate to victory points, some light “take that” mechanics, and other goodies. Everything outside the dice will be instantly recognizable to any gamer who has played a Euro in the last 20 years. The lone innovation is the dice building. Sometimes that’s enough. Sometimes it’s not.

Whether or not you enjoy it, then, will be directly correlated to which elements draw you to the game. Dice building isn’t new, but it’s still somewhat rare in board gaming. While various genres become oversaturated mere moments after a couple catch on (see also: roll & writes), many people have still never played a dice builder. The novelty will count for something with most, and it certainly does in Dice Forge. It feels different, and “different” is an increasingly rare commodity with board game mechanics, one that’s usually accompanied by fun.

Novelty isn’t equal to depth or an assurance of replayability and longevity, though. So the dice building takes us in the direction of a recommendation, but isn’t enough in and of itself.

The resources and engine mechanics are fine, but, as mentioned, bring nothing new to the table. I do reject the notion that there are “right” choices a lot of the time – an occasional criticism of the game – because I can see how numerous card abilities could be “best” in a particular set of circumstances. I’m of the mind that if there really are optimal options, the advantage is marginal, particularly in the face of randomized dice rolls that can equalize a lot of small imbalances. That said, there really are only so many options of resources and cards. On many turns, you’ll take the most expensive thing you can and call it a day. Expansion cards may liven this up (I’ve not played the expansion), but we’re reviewing the base game here.

Which brings us to the rolling itself. And here’s where gamer types will diverge a bit. The engine-building is more or less deterministic, much like a lot of Euros. The dice rolls, though, are random, but not in the Castles of Burgundy way where there’s usually different ways you can roll with the punches, so to speak. No, some sides of your die will simply be better than others, and sometimes someone will have an unlucky streak that tanks their overall chances. This will attract a certain gamer type who enjoys that risk, while also turning off others who don’t want the whims of fate determining winners as often as the decisions of the players.

Of course, mitigating that risk is part of the dice building. There’s strategy in corralling the randomness. This is in fact a big part of the game, and there are strategies to ensure that your average return on dice rolls doesn’t produce lopsided results that further limit your purchasing options. And yet, it’s still dice rolls, so occasionally you’ll still be subjected to these whims.

I’m being coy here, not taking a side because I’d rather let the review help a reader self-select their interest. This isn’t my style of game, frankly, so I’m trying to present the game as-is before concluding with my (undoubtedly less helpful) subjective thoughts below.

I could see some immediately turned off due to randomness, while others love the injection of some random elements in an otherwise predictable point engine. I can also see some getting plenty of fun sessions in the game, while others tire of seeing many of the same options and combos.

In a limited capacity, I enjoy dice building. Apparently “novel” is enough for me sometimes.

However, I can’t find much else to separate Dice Forge, and I genuinely see very little that’s innovative or terribly exciting about the mechanics and cards outside of the dice rolling. There’s nothing offensive here, mind you. But the game has an audience because of the dice. Strip it of that and the underlying card, resource and point systems, to my eye, become almost painfully generic.

Some games inspire deja vu when you’ve played enough other games. That feeling was overwhelming for me here, but the deja vu wasn’t for a specific game but an entire genre of engine-builders, a genre that has numerous games that iterate their formulas in more exciting ways than Dice Force.

Engine builders usually have to work to win me over. The joy or agony of the dice rolls provide a welcome bit of omnipresent tension, hope and paranoia that disseminates into the game as a whole. Therein lies the appeal for me, and the reason I won’t protest when Dice Forge is suggested. I just won’t be proactively reaching for it.