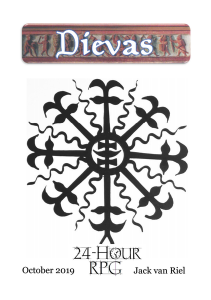 The Premise
Dievas was created for RPGGeek’s 24-hour RPG competition. The setting is that of 13th Century Lithuania during the Baltic Crusades. From this rather specific time and setting, the game features pagan gods – their power greatly diminished due to the spread of Christianity – attempting to protect their community or tribe.

You customize a god and either choose their domain(s) or have them randomly chosen via card draws from a deck of cards.

The cards are at the heart of the mechanics here, determining domains, as well as how you can invoke those domains to perform minor miracles in aid of your community. Additionally, they are the determinants of outcomes involving Trials, which are tests that the gods encounter and which, depending on the outcome, can be a boon or a curse to both god and community.

The game plays out over three Acts. In each, an event (again determined by card draw) will occur, and it’s interacting with and (hopefully) resolving these events that give the game its forward momentum and drama. Act III’s events will be the most visceral and combative, while others might involve more conversational, political or geographic elements.

Card Games
There’s an elegance to card-based games, because everyone owns a deck and it’s all you need to play an entire game. Especially for something like a 24-hour creation, this kind of minimalism is likely often preferable to crunchier systems that require more overhead in terms of materials.

Layout and Presentation
I tend not to focus on the PDFs themselves for these contest entries, because a single day is short enough that producing anything coherent is a feat unto itself. We can’t expect polished designs in addition to this. So it’s with pleasant surprise that I can report that Dievas hsa one of the more logical and polished layouts of entries of this type.

What I Like
There’s a lot to like here, and given that Dievas did well in the 2019 contest, I’m not the only one to think so.

The domains and abilities are all interesting and mildly thematic, and the chance to establish your own minor deity and give them domains is a great initial hook for character creation. The domain abilities themselves are not particularly overpowered, but this is a good thing, because instead of simply “being a god” to fix a problem, you’re going to have to find ways to use what limited abilities you have left in clever, useful ways. I can imagine tense moments where you have a seemingly unsolvable problem and the only card available to you allows you, for example, to inhabit the body of a horse. How in the world will you use that to succeed? Oblique applications of such abilities will likely produce a lot of fun moments.

The press your luck of trials is also a great mechanic. You can fail these tests, or you can fail them. If you choose to keep pulling cards and succeed, the relief will be tangible, just as failure after such a decision will be appropriately punitive, thus increasing the difficulty of subsequent events.

What’s Missing
There’s one big thing I think Dievas needs to tie it together, and that’s a comprehensive example of play. While no one mechanic confounded me, I struggled to envision the game’s flow from one act to the next, and from one mechanical set piece to the next. And despite the elegance of the central mechanics, when to pull and resolve cards for things like new NPCs, tests and events, is never clearly spelled out. Again, the creator was on a timeline, so this is forgivable. However, if they ever return to Dievas to add material, I’d strongly encourage a 1-3 page example of play to provide a template from which prospective group could iterate.

Given more time, I think additional domains and events could easily be created as well, though this is also the sort of thing that would be easy enough to homebrew for adventurous gamers.

Conclusion
Dievas is a fine example of an interesting, coherent system that will reward clever and creative play, created on a timeline that makes the endeavor truly impressive. It’s worth checking out to play, or simply to see how a simple, card-based system can be used to create a rewarding system of play.

You can download this RPG for free on RPGGeek!