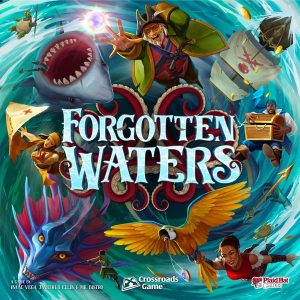 I’m not sure it succeeds entirely in any single area, but I do think it manages to succeed as a whole. The game’s waters are choppy at times, but the boat still manages to dock at port, so to speak.

Forgotten Waters is really a storytelling game. It has more in common with some novels or tabletop RPGs than many board games. You’ll make semi-informed decisions at each stop, increase your character stats in the hopes of completing your personal story arc, and make a bunch of skill check rolls.

Through it all, the game’s website/app will guide you through the proceedings, and the voice acted narration will pop up frequently to provide context and narrate specific sequences that are often tied to a narrative choice.

It’s a cooperative game, so there are multiple ways to lose, but only one way to win as a team. Additionally, players must complete 4/5 of their story arc segments in order to individually win. Otherwise, the mission succeeds but your personal tale ends poorly.

Choose Your Own Adventure (CYOA) games have a storied history, mostly in literary form. They’ve crossed over into board games a handful of times, most notably in Tales of the Arabian Nights, which is decades old but still in circulation.

Tales is, well, it’s chaotic. You make a choice, and see what happens, and if you’re lucky, the outcome actually seems to match coherently with your decision. It’s great fun – don’t get me wrong – but it lacks the strategic agency that modern gaming generally requires. I can turn off my critical faculties in Tales and just enjoy the ride, but it’s a frequent target of the “it’s not really a game” phrase. I disagree, but it would be impossible to argue that it is anything but a fanciful, extremely random CYOA.

Forgotten Waters seems to have taken a few cues from Tales. Dropping one exotic backdrop for another, it manages to pull the same goofy energy into many of its read-aloud vignettes, while also having those segments make more sense than many of Tales’s outcomes.

There are hilarious moments, but also some duds. By the second half of my sessions, I was invariably tired of many of the minute-long voiceovers that culminated not in an interesting choice, but simply a quick stat boost. If I’m making a harrowing decision in a storm that affects our team’s stats, awesome! If I’m listening to the captain ramble on for a minute, only to get a re-roll token, I feel like my time’s been wasted.

So if the game adeptly translated the evocative storytelling from Tales, it occasionally forgets that the chief reason we like such segments is that we get to make a choice that leads to the outcome. Even if that outcome is semi-random, the fact that we’re choosing at all is the important part.

Overall, though, the stories are great fun. While occasionally stopping and starting in fits, and even through the longer, more meandering voiceovers, there are tons that are excellent. The light roleplaying elements also give players a chance to build a narrative arc for their character through the decisions they make throughout the game.

Lastly, your player sheet affords a lot of customization, including some mad libs-style fill-in-the-blanks. These are amazing fun, and will continue to provide laughs throughout the game.

You have a single d12, and you’ll be rolling it a lot. Outside the app-driven read-alouds (and sometimes within them), much of the game is spent in resource management and stat increases, and most of those will be tied to stat-based rolls.

It’s all easy enough to figure out. By the end of the first round/location, you’ll know 95% of the mechanics that will be needed to complete the game.

This is good because it doesn’t get in the way of the story-driven aspects of the game, which are ultimately the draw here. If it was just about lightly strategic dice-rolling, there are 100 other games that fit the bill. But to get the narrative heft from those games is a different matter, and Forgotten Waters will trump anything but full roleplaying games in the storytelling category.

The downside is that it may feel a bit sameish eventually. Gain a Navigation Stat, Make a Navigation Roll. Gain a Brawn Stat, Make a Brawn Roll. And so on, over and over. Or “Choose 2: A, B, C or D” where the four choices are tied to four of your group’s collective stats (Supplies, Crew Discontent, etc.). To call it mildly strategic is probably a compliment, because “not very strategic” would also be appropriate. Only during the “boss fights” and critical moments of our missions did there seem to be any tough choices that required group input. Everything else was a touch rote.

This is a fully cooperative game, but you also need to complete your personal story beats, which requires that you prioritize certain stat upgrades on your player sheet. This, then, injects some light tension as you pick action options that will occasionally block others from a desired action.

The game doesn’t seem to penalize you greatly for this through most of the game. So long as a handful of critical options are selected at key points, everyone can lumber toward their personal goals at more or less the same pace. The game seems designed to last about as long as most will need to complete 4 of 5 of their story beats, with some luck pushing some to 5, and bad luck pushing others to 3.

I actually enjoy this dynamic. Some games that attempt semi-coop elements fall on their faces, for varying reasons related to the selfish vs. selfless dichotomy. Forgotten Waters avoids this problem by making it worthwhile for everyone to work toward their story beats, even if you occasionally irk a crewmate with a decision.

The game holds up to seven (7) players, which seems a bit much to me. My own plays have topped out at 6P, and the sweet spot for me seems to be 5P, but I could envision some larger groups making this work.

The play length seems more problematic to me. At up to 240 minutes, a full four hours, this is very much at odds with the playful, almost cartoonish theme the game sets forth. There’s an option to “Save” your game midway and continue it later, but realistically, this will only work for groups that 1) meet regularly and 2) always have the same group.

To play devil’s advocate to my own critique, play length hasn’t been an issue with my group, but missions have also legitimately lasted about 3.5 hours, and we were playing on nights where we knew it would be our only game for the night.

If you play in a game club, for example, with a rotating cast of players, this may never be able to hit the table.

I love epic games that take a while but justify the large investment of time. But at four hours, Forgotten Waters is entering Twilight Imperium territory. I don’t think I’ll be alone in saying that it could stand to shave at least some of that time off. It shares this problem with Tales of the Arabian Nights, but Tales is more easily house-ruled to shorten play time. In the app-managed world of Forgotten Waters, there is no such option.

The time allows for full narrative arcs, yes. There’s a true sense of satisfaction at a completed mission. But I also can’t help but feel like more cautious use of longer voiceovers, and maybe truncating story arcs from 5 segments to 4 (and/or reducing the number of sub-goals within a mission by one) could have cut 30-90 minutes off of sessions, but without sacrificing what makes the game great.

This is a “Crossroads” game, or at least inspired by them. Crossroads is a loose term referring to the forking choices you’ll be presented with.

The only other Crossroads game I’ve played is Dead of Winter. You can see some of the same DNA here, but the aim is entirely different. Dead of Winter (DoW) is a board game with story elements occasionally injected into it. Forgotten Waters is a storytelling engine told through gaming mechanics.

The distinction is important. I don’t remember a single “plot” of a DoW game. What I remember is mechanical stuff, like “oh, that was the time where Tim was the traitor and I kept getting bitten.” Conversely, I remember each of my character names and several key events from each Forgotten Waters mission, but nothing of the individual decisions I made.

If you like DoW, asking yourself which portions of it you enjoy is a good metric to gauging interest in Forgotten Waters. If you enjoy the strategy and hidden traitor complexities, Forgotten Waters may be a pass. On the other hand, if the Crossroads events were some of the more exciting moments of those games for you, Forgotten Waters will be a blast.

My games didn’t feel like 3-4 hour affairs. I was too busy having fun and building stories around our characters and crew, along with my fellow players. If I stepped back and looked at the dice rolling too closely, I’d see a poor man’s version of the D&D I love so much, but I’m also not approaching the two in the same way. It’s light fun, but it’s also intensely dramatic fun, channeling the same energy as the best of the Pirates of the Caribbean movies. The writing is clever enough to induce some laughs, but the structure creates organic, emergent hilarity through play, so that you’re smiling too hard to really care about the game’s rougher patches.

So perhaps the only lasting critique I’ll offer is that I don’t think I’d want to play missions back to back on consecutive game nights. It would be too much of the same thing. But if those missions are spaced out properly, I’ll be happy to complete each in the base game (which I’ve done by this point), perhaps revisit the better ones from time to time with new players, and dive into any expansion missions the designers choose to release.