With The Emperor’s Gifts expansion 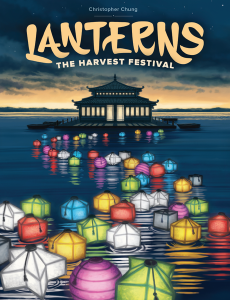 Lanterns is a tile-laying, set collection game wherein you’re building an expanding lake, covered with lanterns of various colors and shapes, and you’re collecting certain colors in order to dedicate sets of them to the emperor (for victory points, of course).

The tiles are sturdy and well-made. The lantern cards were a touch curved upon arrival, but are similarly sturdy. And the wooden chips are pleasing to look at and hold.

The box is probably slightly bigger than it needs to be, but the box art is beautiful, and there’s ample room for expansion materials.

Lanterns is, by any stretch, a beautiful game. The vibrancy of the colors used, on both the tiles and cards, is eye-catching. And the overall design is elegant enough that it never looks gaudy.

I’ve heard grumblings that this game might be difficult for those who are color blind. To this I’d say that it might not be easy, but Foxtrot implemented enough visual variance to each of the lantern styles that it’s possible to play without differentiating colors. That said, I can’t imagine it would be nearly as fun to do this, as the lanterns on the tiles are rather small, and matching them to lantern cards would likely be tedious. So while it’s commendable that the designers made the game accessible to the color-blind, I’m not sure it will be ideal for them either. Hopefully I’m wrong, but that was my impression.

The Feel of Gameplay

The game is remarkably easy to learn and teach. The 30 minutes listed on the box feels about right for most plays. And despite the ease of learning, there’s enough strategy to give most gamers plenty to think about.

It’s technically an abstract game; the actual narrative bits about the festival are mostly superfluous. But for an abstract game, the visuals bring the theme to life in a surprisingly strong way.

In a visual-thematic sense, perhaps a logical comparison is Hanabi. The similarities end there – the mechanics are nothing alike – but I’d compare this favorably to Hanabi’s fireworks in terms of feeling like you’re actually decorating a lake with lanterns.

Depending on the player(s), the game can be a little bit prone to analysis paralysis (AP). This is especially true late in the game, where there are numerous viable options for tile placement, and trying to mesh placement with the other strategic elements can easily cause AP. Despite each tile affecting each player – a nice hedge against downtime – there can be some tedious stretches in the late game.

The other negative I’ll mention concerns player count. The game comfortably holds 2-4, and I’d recommend it at any player count. However, it’s my opinion that Lanterns truly shines as a 3P or 4P game. The game becomes more tactical at 2P, so others will justifiably have the opposite opinion. However, I’m not sure this is a game that benefits from being cutthroat, and at 4P, those rougher competitive edges are mostly sanded away so that the spectacle of your growing tableau is the main event.

I play a lot in public venues. In my time in the hobby, I’ve (almost) never seen the reaction that Lanterns gets. People will walk by our table and ask about it. Some are fellow gamers. Some are complete strangers that aren’t there to play games. For an example, the first time I ever played this, I ended up giving two people the name of Foxtrot Games by the end of the night so they could look it up. There were other games being played, but we were the ones they talked to.

Point is, this game will turn heads and catch peoples’ attention. So if it’s a selling point for you, I’d say there’s a higher than normal chance that others will be interested in playing your obscure Kickstarter game than there usually is. For me, that’s definitely a selling point, because it’s frustrating to not be able to play something that you bring because no one else is interested in it, or they’ve never heard of it, or both.

There’s a lot to like in Lanterns, and everything above is absolutely true. But the base game of Lanterns has a flaw, and it was one that threatened to kill the game for me over time. You see, the “four of a kind” dedication tiles were statistically better than the other types, to a degree that if you did nothing but target them through most of the game (until they were depleted enough to make the card-cost-to-VP ratio more even with the other dedication types), you were probably going to win. And I didn’t even sit down to a spreadsheet to figure this out; it just became apparent with some quick mental math and a handful of plays.

So if I played with a group who all realized this, it was a mad dash for these tiles until they were nearly gone; certainly not what the designers intended. And if I was playing with newer players, I was either going to win, or I was going to have to spell out this tactic at the onset, which is the type of “play this way or else” ultimatum that many players resent. I’ve received some small pushback on Board Game Geek on this as a surefire strategy, but can’t say I’ve ever seen evidence at the table or in more rigorous mathematical analysis; if I took my own advice even against seasoned gamers who weren’t using the same strategy, I always won comfortably. I play in a large club, so there were a lot of casual or new players of any given game. I eventually took to deliberately pulling my punches and playing sub-optimally, which also felt like a cop-out.

I hate spending so much time talking about this – it’s a lovingly-created product with a lot of support and a great central mechanic – but it really was the entire difference between me loving the game and not wanting to pull it at all.

So I smiled a bit when The Emperor’s Gifts gives you higher-scoring tiles for the two other dedication types…a tacit acknowledgement of this fact. The new tiles rebalance the ratios appropriately. There will still usually be a “best” dedication among the three types, but which one it is will now shift frequently enough to balance gameplay, and the difference should always be marginal enough to reward a variety of play styles. It’s still a shame the imbalance existed in the first place, but it won’t be an issue for some groups, and for the ones where it is, this expansion exists.

Moreover, depending on which Emperor Cards you draw in your game, there are other dedication options, as well as other options to collect VPs and alter your tile placement or lantern dedications. And there are also unique considerations about giving other players Gift Tokens, which complicates tactics a bit relative to the more straightforward original. These are all good things. I’ve seen some analysis paralysis take hold, but the fact that the game’s central mechanic gives something to every play on every turn (or nearly so), means that no one seems to lose interest even on the more fiddly turns with multiple actions and used Gift Tokens.

My review of the expansion isn’t based on too many plays. I’m not sure it needs to be though. My aim isn’t to write a comprehensive review, but to say what it does for me: namely, I think this expansion will save the game for me from an eventual collection purge, and renew it as one I can endorse. It adds variance due to the Emperor Card draws, more to consider on each turn, and balances the game appropriately. I’m not sure each of the Emperor Cards is going to be as good as some of the others (the suggested “first time” ones are pretty cool) but there’s plenty to like regardless of which draw you get.

I also think it’s still teachable to non-gamers. As others rightly attest, and I have as well, the game’s core is still elegant and the wonderfully colorful production enhances the experience. I look forward to deepening my experience with the game through the expansion.

Lastly, if you want to strategically balance the base game but without additional complication, you can only add the new dedication tiles.

Lanterns is an elegant, semi-thematic abstract game for 2-4 players with a friendly learning curve, satisfying play length, brilliant visuals, and moderate depth. Eventually it might lose the interest of regular gamers, but the expansion provides new and varied options to refresh the experience amenably.