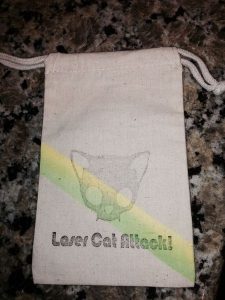 This is a bit of a divergence for my board game reviews, but it’s the very first one I wrote (which was originally published on Board Game Geek). As a matter of posterity, I republish it here:

Rules
Since this is one of the more obscure games I’ve covered, an actual rules run-through may be in order. The creator did a nice job putting together a video tutorial for the game. It can be found here.

I won’t go into further detail, as the video does a good job.

Components
The cards are solid and fun. The dice, less so. The bag is adequate. And the artwork on the cards varies. The dog bosses and cats are all nicely done and often hilarious. It’s not high art, but a style is established and the cards stick to it. The more generic cards – food, instant play cards, Catnip cards – don’t inspire the same admiration, but neither are they an eyesore. The game wasn’t expensive, so the quality-to-price ratio is fine. The catnip die is the only thing I’d like to see redone with higher quality. I didn’t mind placing the stickers on the die when my copy arrived, but the stickers themselves seemed very dull compared to the brightness of the cards.

With games in bags, portability is usually a big draw. This game bag is a tier larger than, say, Love Letter, so it’s not quite at the “put it in your pocket” category, which is a shame. But it has enough components that to make them smaller would be doing a disservice to the game, so this is largely unavoidable. It’s still easy to use as a “travel” game, though, even if it’s kept in a satchel or purse rather than a jacket pocket.

Gameplay Experience
The game was very easy to learn. On our second play, we brought my mom to the table, and without giving her a run-through of the rules (I know, I’m a bad gaming son), she had figured it out by about the middle of the game.

The game plays very quickly – about 15 minutes at most – even with 3-4 players and on the hardest (and longest) of the dog bosses. With 2 players and/or an easier dog boss, it could be over in a minute or two.

There is player elimination, but the short game time makes this a moot point for me.

There isn’t much strategy to be had. There could be some in picking which cat you want, but the randomness of the game mitigates this as well. The card draws and dice rolls are random. And the choices you make once you have your cards are mostly automatic. There are actions where you can affect other players, but few that involve player choice.

The drama, then, revolves around card draws and dice rolls. The “take that!” elements of the game never get too nasty, so it’s fun to be able to laugh along with a player whose dice roll goes awry, or whose Dog Bite card brings them precariously close to death. The lack of spontaneity and choice in the actions puts all the pressure on these random elements, though, and I feel like most people – gamers or not – would tire of it before too long.

Final Thoughts
I backed this on Kickstarter to give as a gift. That’s important to note, because it didn’t look to be the kind of game that I would want to play with any regularity. But it DID look like the type of light, quick, silly-themed game that would appeal to my sister. She’s not a gamer, and is busy/stressed enough in life that if she plays a game, she doesn’t want it to make her work too hard. So she appreciates the occasional diversion that games like this provide, and she’s not going to be put off by the same things that would drive me away.

So I feel a bit bad saying that this isn’t really a good game, because I’m likely not the intended audience, and it’s also not trying to be anything other than what it is: a quick filler game with a silly theme and very little strategy. Gamers of most sorts will want to look elsewhere, but I do feel like there’s an audience of either children or non-gamers who aren’t opposed to a very light game now and then who will enjoy it. The theme makes it presentable to pretty much anyone, and I didn’t dislike my two plays. I was just indifferent. So I can’t recommend it beyond a very select group, but perhaps that’s enough for such a small, quick game.