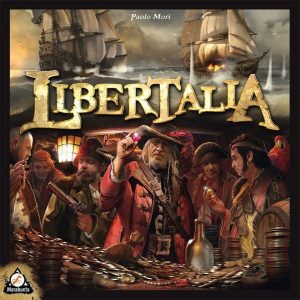 “Pirates” is a theme that’s well covered in board games. Libertalia happens to be my favorite of them, which is no small feat. The tropes of the theme, from ransacking villages and raiding other ships, to evading imperial pursuers and collecting shiny doubloons and gems, all lend themselves effortlessly to game mechanics. It’s an easy theme to bring to life. Libertalia, then, surprises not in its thematic integration (which is excellent) but in how it manages to differentiate itself within the genre.

There aren’t convenient terms for Libertalia’s core mechanic, which is the first excellent thing about it. I’d call it hand management, but you’re not so much managing your hand as trying to second guess all other players in order to play your cards in the best order. There isn’t a single turn where you’re making decisions in a vacuum.

What everyone else decides to do will directly affect how your selected crew member performs. This is the randomness, but also the brilliance, of the format. Wringing plunder out of that chaos becomes the entire focus. Pick the best card and you’ll have your pick of the day’s loot or will stick it to one or all of your opponents. Pick the worst, and you’ll be knocked out or forced to pick up a cursed relic or another worthless token.

The beauty of the game is one level deeper, though, because each card’s ability allows for a lot of clever, unexpected twists to the format above. I’ve collected cursed relics with low-numbered cards, only to turn them into points with a well-timed ability. Or I’ve passed them to the player beside me at a devastating moment, alleviating all of my burden.

I’ve also seen that player anticipate the relic-pass and ensure that it’s not them but the next player that actually ends up with them. Shenanigans like this abound in any session of the game.

And the cards, mercifully, are limited, meaning that each has a specific function in the game’s dance. If this game were released today, it might be a Kickstarter with 50 more cards added as a stretch goal. I shudder to think how much tight, tactical balance would be lost with this sort of excess.

This same limited card palette also allows new players to absorb not just the mechanics but the strategy quite quickly, while the myriad ways that abilities can interact will continue to surprise for many plays to come.

It’s these moments that give Libertalia an intimacy that many others lack. I enjoy Black Fleet, for example, another goofy game of making out with the best loot at the expense of others. But that’s a game with a 5,000 foot view of the open seas. In Libertalia, I’m on the deck of the ship, giving my crew orders to get me the best loot while glancing over my shoulder at my opponent’s maneuverings mere feet away. I send my Captain to take the best treasure, thinking myself unstoppable, but another sends their Beggar and I find myself giving them money. Another sends their Brute and my captain is left brutalized and unable to collect treasure. My plans stymied but not killed entirely, I shake my fist and plan my revenge.

Where the most sprawling pirate games will see you planning an empire in vast oceans, Libertalia throws you into a below-decks brawl. It might not always be a deadly brawl, but you’re sure to come out with at least a black eye.

Catching Up and Pulling Back

I’ve noticed a feature in some games, including many good ones, that can occasionally spoil the fun. These games, including Libertalia, have at least reasonably useful mechanics to keep the leader in check, to keep things more or less competitive until the final round. However, there’s no explicit catchup mechanic for the player who had a disastrous early round. Sure, other players will tend to ignore them, meaning they don’t have to fear the same elements as the leader does.

Some rounds in Libertalia, though, can be very bad. Now, since spectacular rounds are also possible in any circumstance, it’s rare that someone is truly out of it in Libertalia after one round. But they can feel like they are, which is just as damaging. This isn’t a frequent problem, certainly not enough to significantly mitigate my love of the game, but play enough and you’ll see it occasionally.

Mitigating this is the simultaneous card selection, which means that the pace always feels breezy. A player prone to taking too much time on their turn can slow things down, but less so than in a “one at a time” turn format. This also means that the game doesn’t skip a beat at higher player counts. It’s a go-to for me when a group has six players, since many others begin to drag at that point.

I’ve seen plenty of games where you guess what your opponent will play and play a card to counter it. Usually, though, this is in two-player games.

Libertalia is this tension writ large, with a thematic dose of pirate shenanigans straight out of a Pirates of the Caribbean movie (the box cover, to my eye, even features a legally distinct homage to Geoffrey Rush’s “Pirates” character). That’s the swashbuckling tone the game aims to recreate, and it does so admirably.