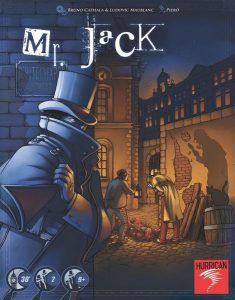 Jack the Ripper is one of eight possible suspects roaming the London streets at night. In this 2P-only game, one player acts as Jack, trying to remain undiscovered or to escape by game’s end. The other player acts as the investigator, slowly whittling down suspects in the hopes of making an arrest before the game ends.

With alternating turns, the two move various characters around the hexagonal board and use each character’s special ability in order to either reveal Jack or confound the investigator. The investigator is also able to ask whether or not Jack is “Seen” or “Unseen” which refers to his proximity to either a working street lamp or another character’s token. In this way they try to uncover which he is.

The round counter is the time limit for both, past which one wins and the other loses.

The cards upon which you’ll view suspects in each round are wonderfully thick, almost to the point where I hesitate to call them cards. They’re more like tablets.

The board and components all get the job done. My only true criticism is that I actually couldn’t figure out how to initially set up the game when I first purchased it. It was my then-partner who realized it was set up – unannounced – in the rule book, in a picture that could easily be mistaken for one that is simply showing off the board and components.

There’s a chess-like vibe to Mr. Jack. While you’re directly comparing wits with another player, most of the game’s enjoyment will come from the silent machinations, bluffs and tactics you ponder on each turn. It’s at once directly confrontational yet very solitary in its experience.

The variety of powers are easily learned, and the means through which you can frustrate the other player quickly become apparent, but the variety of subtle tactics gives this a lot of replayability. If pressed for a one- or two-word description, I’d call this a tactical deduction game, and I think it exemplifies both of those traits admirably.

I won my first five games of this, then the person I played against sort of absorbed the strategy, and I lost the next five. Amusingly, when I was investigator, it was my laser focus on discovering who Jack was that allowed my opponent to simply escape the board entirely on a few occasions, a tactic I’d overlooked in my myopic strategizing. And that’s sort of a microcosm of the game. There’s a lot of granular tactics to consider, but considering the overall board state and win conditions can often give you meta-information that individual character abilities won’t.

The World of Mr. Jack and Hidden Movement

Mr. Jack has spawned a slew of either direct sequels or spiritual successors. I’d also include “hidden movement” games in this. While no one moves in hiding here, the hidden identity of the killer creates a somewhat similar cadence to games.

I won’t do a comparison with each of these games, because it’s often not apples to apples, but I bring them up to talk about why I like Mr. Jack.

There’s something to be said for the purest, most distilled version of an idea or mechanic. It’s the industry’s general trend to either take longer, more complicated affairs and distill them to their essence (e.g. One Night Ultimate Werewolf, which is a distilled version of Mafia/Werewolf). Or it takes a central mechanic and adds twists or layered mechanics on top of it (e.g. the many games that took Hanabi’s mechanic to build something grander). None of these are good or bad by themselves, and all are valuable in the hobby. But there’s something here in Mr. Jack that gets lost in, say, the objectively meatier Fury of Dracula (which I also enjoy, it should be noted). There’s something refreshing about a 30-45 minute puzzle where I know all of the variables beforehand, but not how they’ll interact, and I can see each of them play out. There’s luck in Mr. Jack, to be sure, but it never really feels like it. When I lose, I always think I deserved to lose, and vice versa.

There’s also a frustration that’s lacking here that you find in some hidden movement games, where the players made a miscalculation and are simply floundering for a long period of time. Here, you may not know who Jack is exactly, but you’re never more than a well-planned turn or two from finding out.

Some might push back on my comparison to hidden movement, but I do think this exists somewhere in the conceptual space between, say, Chess and Scotland Yard. It obviously doesn’t have the unfathomable depth of the former, but will still reward many, many brain-burning plays.

Back to the more concrete, the most popular variants are Mr. Jack Pocket, a further-distilled, quicker, travel version of this. It occupies a different niche (filler) but will scratch a somewhat similar itch. Mr. Jack in New York is the other big one, a successor that adds some new abilities and mechanics but retains the core gameplay. I don’t have enough plays of this for a full comparison between the two, but the general consensus seems to be that it keeps true to the tactical tension of the original. I frankly don’t see anything in it that necessitates owning both unless you’re a huge fan of one, but you probably can’t go wrong with either one.

There are grumblings in strategy forums about whether or not this game is balanced. Usually the claim is that the game is harder as Jack.

I don’t have the data to refute or corroborate that claim, but my overwhelming experience with board games is that any legitimate imbalance only occurs at levels of play you’ll only reach after dozens or hundreds of sessions that 98% of gamers will never achieve and don’t aspire to. For every claim of imbalance, there’s a competing story of someone with roughly equals wins as both. For a game as crowd-tested as this (it’s well over 10 years old and still going strong), any imbalance you see at your table will invariably be from the luck of the card draws and the tactical play of those involved. These types of claims seem to haunt asymmetrical games, though, and whether or not things are weighted 50/50 between sides is something of a moot point when the other variables and decisions in play will affect the outcome far more. I don’t say that to downplay the issue of imbalance, which can be real for many games, but simply to say that it shouldn’t be an issue here for someone considering the game.

Fans of social interaction at the table. You can always chat, but a lot of the game will be “played” in your mind, making it more of a quiet evening game rather than a game night game. And if “tactical deduction” turns you off, steer well clear.

I usually play in larger groups, so this sadly didn’t make it off my shelf for a few years, after which I parted ways with it. This was due to my gaming environment, though, not because I stopped appreciating it as a great game. Mr. Jack is one of the more time-tested Cat & Mouse games in our hobby, and it’s one that will delight fans of the same.