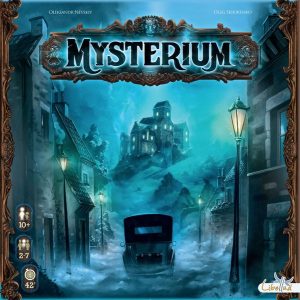 The Balance of Ambiguity

When I play Mysterium, I see something similar to many good social deduction games.

There is, of course, an element of deduction. What was the Ghost (clue-giver) thinking when they handed me these two cards? The cards that your fellow Mediums (clue-guessers) get can often narrow your choices. It then becomes a (mostly) real-time cooperative game that manages to involve everyone without allowing for “alpha gamers” to dominate the proceedings.

The other similarity I see is this: ambiguity.

In social deduction games, you’ll often suspect that Cynthia over there is the traitor, but you’re not entirely sure it’s not Scott, sitting next to you and being very, very quiet. You can confirm that three of the four others aren’t evil, and you have no information on the final player.

So who do you trust?

Partial information is a beautiful thing when executed well, and the best social deduction games manage to find that line between confusion and information regularly.

Mysterium doesn’t balance information with confusion but rather uncertainty. Sometimes a clue is beyond obvious. More frequently, though, you’ll be torn between two or three options, and the Medium sitting next to you will be torn between the same two or three. Process of elimination ensures that some progress will be made, but if you want to solve the ghost’s murder in time, you’re going to have to guess correctly the first time on at least a handful of occasions.

This lends the game tension, camaraderie, legitimate cooperation, and fun moments after the game where you get to talk through your thought process as the ghost. Any game where I find myself discussing it with other players 3-5 minutes after we’ve packed it up is probably a memorable one.

Dixit is one of the more malleable games in the whole hobby. I’ve played Codenames with Dixit cards, for one example. For another, probably a dozen (or more) games on the market simply used Dixit cards for their prototype copies, to avoid commissioning artwork for something that might never be picked up by a publisher. I’ve heard this may have been the case with Mysterium, and it makes perfect sense.

Dixit is universal for this fact, and others related to its simplicity and elegance. Mysterium, then, and many others in Dixit’s lineage, both add useful twists to the formula while losing something of the timelessness of their predecessor.

To really make Mysterium work well, you’ll want 5-6 players. Dixit is perfectly enjoyable with four. For Mysterium, you’ll probably want to find gamers with some prior knowledge of the game mechanics involved. With Dixit, I can introduce it to 6-year olds or grandparents who have never played anything that doesn’t involve a chess board or standard deck of cards, and it still works well. But it also works equally well with the crew I play Twilight Imperium with.

So Mysterium sacrifices breadth of its appeal for more specific appeal. In this capacity, it works well. For gamers who enjoy the central premise of guessing meaning behind beautiful, vaguely abstract, fairy tale-style artwork, they’ll find a bit more meat on the bones of Mysterium upon which to chew.

I have a bit of a roller coaster history with Mysterium. At first, I thought I’d enjoy it quite a bit more than Dixit, a game that is always a delight. And I did…for a while. Its more specific appeal seems to create a more specific experience, though. So as I played more, my enjoyment remained, but waned slightly from its earlier, highest levels. Since I play it less than Dixit, I often find myself wanting to play it more. But then I’ll play it and, with my desire to play satiated, I’ll go back to preferring Dixit for long stretches.

Standing Out From the Card Game Pack

I wasn’t lying when I said there are a lot of Dixit knockoffs. Hell, I even designed one a few years back that is most succinctly described as “competitive Mysterium, with two teams.” Naturally, it uses Dixit cards for its prototype copy. Everyone thinks they can iterate meaningfully on the original; such is its elegant allure. But only some actually do (my design, sadly, may not be among them). Fortunately, Mysterium truly does provide a novel, consistently interesting experience.

Mysterium also has something of Codenames in it, because clues are filtered through the thoughts and tendencies of the Ghost who’s giving them. This is another wonderful trait, because it allows the table to guess at, and eventually learn, some of those tendencies. Further, each game will be slightly different not because of the mechanics or cards, but because the clue-giver will bring a new perspective.

It’s a game that adds a human element as an agent of replayability, which is one of the higher compliments I can give a game.

Mysterium manages to stand out in this sea, though, due to the confluence of desirable traits mentioned in the opening section of this article. The fact that it’s cooperative while being tightly designed also means that the elation or sourness of winning or losing together is, in either case, a wonderful shared moment.