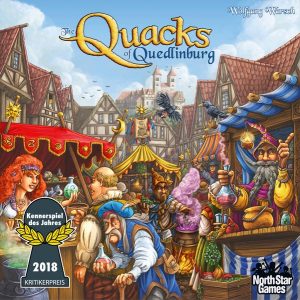 Quacks of Quedlinburg breaks a general rule of mine in my gaming tastes. The less my actions affect my opponents (and vice versa), the narrower its chances of winning my esteem. It’s not that I can’t appreciate and enjoy a well-crafted, dense game with minimal interaction, but that those games rarely soar to the emotional heights that I find in more interactive titles.

Quacks isn’t devoid of interaction, but it’s also one that won’t punish a more myopic approach. It’s with pleasant surprise, then, that I absolutely adore Quacks. Let’s unpack why.

I’ve covered a few other “press your luck” games (or with a couple, they’re written but not released yet). One of those (one of the good ones), Can’t Stop, is press your luck in its simplest, most distilled form, and I’ve talked about how there’s no lackluster barrier in it between you and the tense, heart-attack moments of dice rolls. It’s this omnipresence of tension that the game owes its longevity and popularity to.

Quacks trades dice rolls for drawing chips from a bag, but the tension is still there, and more importantly, it’s always there. The additional chip-purchasing mechanics, and the benefits most of them confer, do not create distance between you and the tension.

Rather, they heighten it, because your bag, eventually, will be crafted with a certain goal in mind. Maybe you want to chain a few particular bonuses to reap rewards beyond their individual parts. Maybe you want more of a particular color than anyone else.

Whatever it is, you’ve constructed your bag accordingly, so the perfect chip exists inside the bag in each new round, as does the absolute worst one you could draw. This isn’t just perfectly tense, it’s heightened perfection relative to most press your luck games. Those, including Can’t Stop, are more or less zero-sum. Either you Do the Thing, or you fail. Still tense, but ultimately limited. A range of outcomes exist for most draws in Quacks (until your final few of each turn where it again becomes a harrowing zero-sum game), but everything in this range will produce some emotional extreme: fist-shaking rage, nervousness that gradually ramps up until it hits a fever pitch, or abject relief.

Perhaps most importantly, whether you succeed or fail, it’s hilarious.

Sure, you’ll need to be able to laugh at a bad beat in a particular round, which will inevitably happen. That’s true of any game within the genre though. Quacks again expertly navigates these bad rounds with an intuitive, unobtrusive catch-up mechanic that really does let someone come back from the dead, but still makes them earn it. It’s a game that provides you a route back to relevance, but won’t hold your hand in a way that more visceral, all-or-nothing gamers will find repugnant.

Expansion options and chit-power variations will provide variance to give the game more mileage for regular players, and the way that the success or failure of others around the table subtly obliquely shifts your risk tolerance will enliven the game upon repeat plays.

So no, it’s not terribly interactive. You’ll want to pay attention to your opponents, but the heart of the game is you, your bag, and The Decision to draw or not. This lack of robust mechanical interaction is fine here, because that core dynamic is so incredibly strong.

And it’s a joy to watch other players’ plans unravel before your eyes. I can’t name too many games where another player’s action doesn’t change my own strategy, but I’m still eagerly watching others’ boards as much as my own. It’s just good fun. Play is largely individual, but the experience is communal. Therein lies the appeal for me.

That’s enough not just to make it one of the finest press your luck games, but one of the best games to come out in recent years. The Spiel des Jahres, ostensibly gaming’s highest honor, often feels like a compromise pick to me. It often goes to the game that, to my eye, will have the largest overall appeal, but not necessarily the one that does any particular thing best. I will happily name Quacks my “best in class” of its type – or, if you want to take umbrage there, it’s certainly in the conversation – making it a rare winner that I think has both widespread appeal and niche appeal for those looking for the outliers that will offer the highest highs that the hobby has to offer.