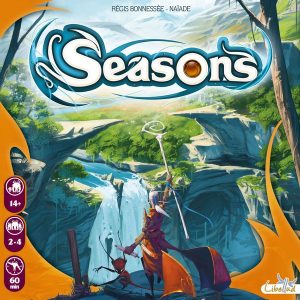 Seasons is a game with a lineage. It’s not uncommon to discuss the game with someone and have them mention such luminaries of the hobby as Race for the Galaxy or Magic: The Gathering (MTG). There’s a robust market for games that, if we boil it down to the intent and audience, are trying to recreate the appeal of MTG, but in a format that doesn’t necessitate the monetary and time commitment of that behemoth.

For clarity, these games feature large arrays of unique cards (or nearly unique) that combine in myriad ways to create powerful combinations.

I have reservations about these types of games, but not necessarily of a mechanical sort. At their core, they are card games that feature wildly unique cards. True, the cards tend to fall into certain categories, but they are deliberately different so as to create functionally infinite combinations. As such, you have to read each to understand what they do during play. And if you aim at competency or mastery, you have to absorb each unique ability to the degree that you understand which combinations it will work best within. It takes no small amount of effort to manage this.

This, in itself, is no big issue. The problem comes with context. It goes without saying that players with any experience will beat new players, and that expert players will always beat casual players. This is true of many games, but the lines between these levels of mastery seem more absolute in combinatorial card games than in other genres. Right or wrong, I can walk into, say, a worker placement game believing I have a chance to win against a more experienced opponent. Not so with anything I’ve mentioned in this review. My feeble attempts at an engine based on my general board gaming acumen will be stomped by anyone who knows even a cursory few powerful combos.

Maybe you play with the same small group, and this is a non-issue. Once one person discovers a combo, everyone knows it. For many of us, though (myself included), we play with a rotating cast of friends, and in a larger hobby landscape where The Next Big Thing is always just around the corner. Mastery is, at best, reserved for precious few games, and for many it’s never achieved for any game. This is particularly true of those who are playing for social reasons; memorizing card combinations is the antithesis of their reason for playing.

I have friends who adore Seasons. They have to play with each other, and basically hold little-to-no hope of bringing others into that circle because of this gap. At best, someone will wander over, become enamored of the colors and art, and give it exactly one game before realizing how out of their depth they are. They’ll grok the mechanics, which are not overly complex and are pleasantly interrelated. But, realizing they’re categorically overmatched by even casual players, they make a decision about what mental resources they want to devote to improving at the game, and it usually culminates in turning down future requests to play.

As a result of this, Seasons has become a game with a devoted but ultimately limited following.

However, Seasons is also a game that softens the learning curve a bit, and so it separates itself from its mechanical brethren in a significant way. There are suggested starter cards for games with new players, and these are cards with less obtuse usages, which require less mastery of the entire system in order to utilize intelligently. So when I played, we started with everything, including the more advanced cards and some expansion stuff, because I’m a “gamer” and can handle complexity right from the start, at least in theory. Predictably, I lost convincingly, but more importantly, I didn’t feel any closer to unlocking the game on subsequent plays, because the card combinations were all different. Then I played with the starter cards only…and I won. More importantly, I won because it was obvious how I might delegate my starting cards into my I, II and III piles to create a viable engine. Then I played again with the starter cards. No win this time, but I was doing intelligent things that felt like I was actively engaged in the game’s systems. I’m several plays past that now. I still haven’t gotten the hang of leveraging some of the more oblique combinations, but I have a foothold at the base of the climb, so to speak, which is important.

Race for the Galaxy is harder to absorb initially, but has the benefit of being among the first and oldest popular hobby games to follow in MTG’s legacy. Yes, it borrows from other games as well, but Race diehards are, more often than with other games, graduates from MTG and looking for that same fix. Regardless, race for the Galaxy can cheat with its learning curve because it’s more embedded into the hobby. It jumped into the zeitgeist with less competition. Seasons – and many others in more recent years trying to iterate on these ideas – don’t have that luxury, so they must either bring some very unique element to bear, or streamline through the barrier to entry that keeps many out. Seasons does this amenably, provided you don’t shove players into the deep end from the start.

Despite the presence of some light “take that” cards, I initially wanted to say this game remains a largely solitary experience. That’s not quite right, though.

Seasons feels insular at times. It can certainly be played as solitaire, sometimes without strategic penalty. But between the timing of various card plays, several of which do affect other players, and the subtle considerations of die selection, Seasons is at least one tier above the games with the lowest levels of interactivity between players.

To be clear, this isn’t high interaction. I do generally want more of it in my sessions. But it may surprise a few in ways both good or bad depending on your gaming preferences.

While that’s the bulk of what I have to say on the game, to tick some review boxes, the art and components are colorful and fun without feeling egregious. The cards have text on them, correcting one of Race for the Galaxy’s oft-cited sins, that of obtuse iconography. Though it’s still a lot to absorb and will create plenty of analysis paralysis (AP) scenarios simply from having to read and mentally combine card possibilities throughout the game.

Lastly, this is a game with a lot of bean counting between and during turns, and at the change of each season. There’s a lot of housekeeping to it all that some find tedious. I’ve managed to play this online as well, and the automatic scoring and resource tracking is very welcome in this format. Usually I prefer the in-person experience of gaming, but this is one of the few that noticeably improves in the digital realm for this reason.

In-person, I simply can’t be bothered with all the micro-steps demanded by card abilities and game flow, particularly late in the game where chaining effects take a while to resolve.

It’s also been pointed out that this game works best at 2P. While I won’t deny that things like counter-drafting dice are potentially bigger elements in 2P, as well as possibly-maybe playing cards a bit differently, I’ve found the difference to be minor between that and larger player counts. There’s less downtime too, I suppose, though the presence of an AP-prone player is the biggest fear here, not more players who play at a reasonable tempo. In any case, it’s “best” at 2P, yes, but not prohibitively so if you’d prefer to play with more.

In a genre that I sort of shy away from because of my gaming context (I play in large clubs with hundreds of members and thousands of games), it probably says something that I can endorse Seasons for a particular audience. I’m not truly in that audience – I don’t love combinatorial card games in most circumstances – but I can understand the appeal.

However, more than most, if you’re on the fence about Seasons, I don’t think the most glowing reviews will be the most useful, because they’re from people who have jumped into the deep end and are committed for numerous plays. And this is a game where you need to drink that Kool-Aid to get the most from it.

There are a lot of modern games where the best experiences will come at the deepest levels of play. This game isn’t unique in that respect. But again, the contrast between “Kool-Aid Play” and either surface-level or even intermediate depth of play is going to be much more stark here than with most. Your willingness to jump in will determine how much you get out of a purchase.

If you do, though, there’s a lot of depth to enjoy, and a strong core structure around which the cards and their abilities revolve (quite literally in the case of the season track). If that intrigues you, it’s a worthy game with lots to recommend it.