An old warhorse, and many gamers’ intro to wargaming

The game starts with two players placing their pieces on identical halves of the grid-based board. Their values are known only to the player controlling them. Then, players take turns moving individual pieces, and revealing values as they attack or are attacked. While you know none of your opponent’s piece values to begin, both sides gradually form a mental map of the other’s tactics and layout.

The winner is the player to capture the other player’s flag, which is usually (but not always) in the rear ranks, carefully guarded by bombs and strategically-valued pieced.

Values are 1-9, plus a Spy and several Bombs. As a note, depending on the version you play, lowest or highest numbers may be the most powerful pieces, but the gameplay is the same in either.

Depends on the edition somewhat, but I’ve never seen a copy that will win any awards. This is an old game that shows its age, and if you’re playing, you’re playing for its experience, not its board or piece quality. In this way, it trends toward a mass market abstract game rather than anything that resembles modern board games.

Why Stratego Holds Up

This is a dusty old game that doesn’t quite fit into the heavier wargames of dedicated grognards, but has a place in the hearts of a lot of people who grew up with it, myself included.

Let’s first establish that I do have a certain level of nostalgia for this game from my childhood. It undoubtedly affects this review. However, I have nostalgia for other games as well, games that I also played again as an adult and discovered that they didn’t hold up to modern standards. And yet, I think Stratego still does. So let’s explore why.

The first reason is the eminently variable setup. The only other games I can think of that offer the same level of freedom in setup are either just as old and more dated in other unfortunate ways, or they’re far, far heavier war simulations. Obviously Stratego isn’t entirely unique in this regard, but how many modern games allow you to decide how to place dozens of starting pieces? It’s not just this freedom that’s nice, but that it allows for very different, unique strategies. Your forces feel like YOUR forces, not the prescribed starting setup that the game dictates for you.

The second reason is the tension and terror. The game manages to allow for a lot of tactical nuance while maintaining a healthy amount of abject terror at not knowing what your opponent’s pieces are. They won’t know yours either, so an aggressive offensive maneuver could pierce their forces with devastating ease or be flummoxed before it begins. There is near-constant tension as a result of this mechanic, and frequent hilarity as you guess wrong (or right) about a high-value piece, or lose one of your own.

Lastly, it delivers a rich strategic tapestry on which to maneuver and scheme, but it’s over quickly and never requires you to learn more than a few rules. It’s accessible, which is why it introduced many to concepts that were later honed in more complex war games.

Plenty of abstracts or tactical war simulations offer equal or greater depth, but rarely without having to spend a lot longer period of time learning strategies and tactics. So for example, Chess obviously has more depth, but it can take years to get to a level of competence in it that you can achieve in a handful of plays in Stratego. You won’t have mastered the game, and may never do so (the hallmark of good tactical abstracts), but you can sink into its strategy more readily. It’s remarkably accessible because of how easy it is to learn not just the rules but various strategies. 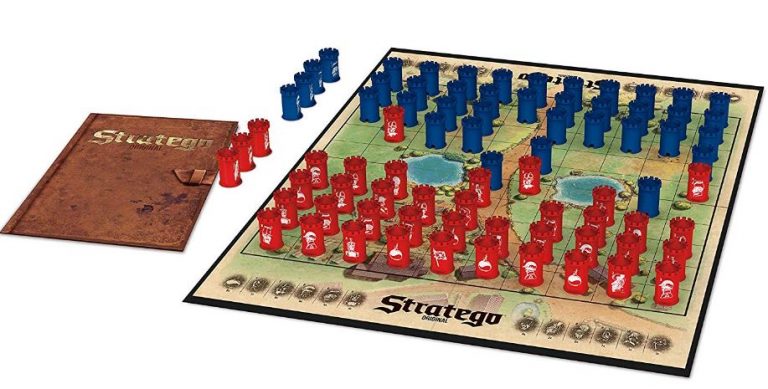 I would only recommend Stratego to a niche crowd these days. It doesn’t check off many of the boxes we look for in modern gaming. And yet, I still thrill at playing it.

I want more wildly open setup options in games. I want more terror of the unknown, not just with things like dice rolls or card draws, but with the very nature of my opponent. I want wide-open tactical games that aren’t burdened by 10-200 page rulebooks or that require intense study to develop even amateur-level skill.

Maybe Stratego isn’t the best at any of those, but the confluence of those aspects – things that seem missing in many modern circles – means that it still holds up for me and feels like a darn good game