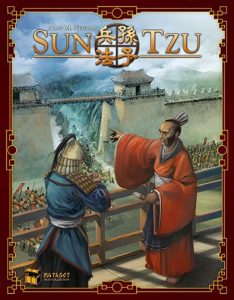 Calling your game Sun Tzu is a dangerous thing. You’re evoking the ancient master of strategy, known for cryptic phrases that are applicable to life as much as warfare. A game that elicits these ideas has to be on its A-game to live up to that billing. Does this one? Let’s find out.

The game is area control, and I’d add hand management to its central mechanics. Over nine rounds (occasionally less), you’ll play a card face down to each of five slots, each of which corresponds to a location on the central map/board. Your opponent does the same, then you flip each and “battle” in each province. A result of 5 v. 3 will see a province shift two toward one player. But, for example, if the one who played the 3 already has three troops in the province, their hold on it will simply diminish to one troop.

Each player has cards numbered 1-6, which will return to their hand if played. Playing the 1 comes with an end-round bonus and the 6 has a small penalty and can only be played to a particular province once. Additionally, you’ll be drawing from a pile of cards to supplement these six, and it’s in these extra cards that the game comes to life. +1, +2 and +3 cards exist (which match your opponent’s number, plus the amount stated) and even -1, as well as cards numbered 7-10 and plague cards, which forego combat and remove half of all troops. With these, once played, they’re discarded, never to return. The game’s dance comes in how, when and where you deploy these cards.

The score track is a tug of war, where you can insta-win in rounds 3 or 6 if you pull the rope all the way over to your terminal point slot (9). More frequently, the game will go a full 9 rounds, and the winner is the one who keeps the score marker on their side.

Each player also has a special one-time use ability unique to them. This is selected from among five possible ability cards for each. Optionally, there are also event cards that trigger at particular points and can be cycled through in a game.

The components in this game are great, with one exception. The score markers are triangular prisms with end caps that you have to put on after you unbox it. Getting these end caps onto the score trackers, and getting them to stay, is infuriating. The game has you randomly pick five score trackers to assign at the beginning of the game. Usually I use whichever still have their end caps on them, and hope I don’t have to reapply any to get up to five. This is the first game I’ve ever owned that was frustrating for me by the end of my unboxing and component setup.

Minus that, everything is lovely, from the card stock and art, to the board itself and minis. This isn’t an overpriced Kickstarter behemoth, but they could have gotten away with lesser components and still been alright. That’s a compliment I can pay to nearly every Matagot game, and good for them for continuing the trend here.

Someone described this on Board Game Geek as a 2P El Grande. I like El Grande, and also like this game, but that comparison is a bit off.

In most area control games – El Grande included – the decisions you make are on the board itself. Where do you move these three cubes/meeples/troops to gain an advantage? Or what areas can you defend through geographic positioning?

In Sun Tzu, the board is more or less there to show you the end result of your card selections, which is where the real game is here.

Yes, El Grande also features card selection to control areas, but the action is all on the board. In Sun Tzu, the true action is in the cards, especially since there’s more round-to-round consideration of what cards to use, and when. As a result, it’s not quite as in your face as many area control games, nor as hands-on. Despite the direct player interaction, it’s more cerebral than visceral.

This is not a criticism, but does separate it from many of its area control peers.

Does the Strategy Deliver?

It’s with some relief that I can say that Sun Tzu’s central gameplay does deliver an adequately nuanced framework within which to scheme against your opponent. Your first couple plays will seem a bit arbitrary, but as you learn the cards available (there are a finite number, and minus their Warlord ability, they’re mirrored in each player’s deck), the game will open up for you. Should I abandon Province A and hope my opponent overcommits? Or trust that he knows I’ll do that, and hit that province with a plague then a high-value card? Or perhaps I can play a plague where I’m overcommitted. And I know they’ll want to play a -1 in Province C, to maintain a majority going into the scoring round, so how can I thwart that?

It’s these sort of questions that will roll through your mind in every round. However, you’re always just placing five cards, so the options are never overwhelming.

The Warlord Cards are excellent as well, since you select the one you’d like to use at the beginning. There’s direct player agency here. As a result, this “ace in the hole” feels immensely satisfying to use.

My lone “meh” is toward the Event Cards, which feel bolted on in an otherwise tight-knit experience. The triggers feel arbitrary, not a natural consequence of player actions. They’re optional, so it’s not a big deal, and I find myself playing without them as often as with them.

Minus teaching, the game can play in 30 minutes, or closer to 45 if you have a new player. The strategy here is going to outpace any microgame or filler, and can comfortably hold its own with several in the 30-60 minute range. I paid $40 USD for this, which feels about right for a lovingly produced game, but without feeling like I’ve overpaid for useless bling.

ROI isn’t always a consideration. If a game is good, it’s good. Increasingly, though, I have an informal calculation running for games that includes ratios for things like enjoyment to play time, depth to play time, price to quality, and so on.

Sun Tzu, The Board Game – Conclusions

Sun Tzu comes out looking good in each of the ratios mentioned above, making it an easy recommendation if this is your type of game, or you’re in need of a good 2P game that mixes the interactive with the cerebral. It’s a game that will reward multiple plays, and ideally with the same opponent(s), because the game will shine brightest when you’ve reached the depths of – say – double bluffing on the highest point-value province in order to make a play for the other four just prior to a critical scoring round, then seeing how that interacts with an opponent’s equally nuanced schemes.

If you like area control, hand management, matching wits with a singular opponent, or some combo of those, this somewhat-forgotten gem may be for you.