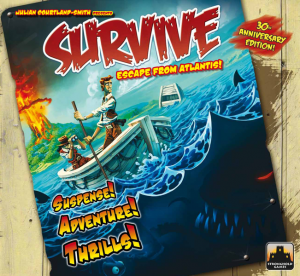 Thousands of titles have been buried in the sands of board gaming time. Last year’s hot Kickstarter might never get a second print run, and so it will be destined to fall into obscurity. Or an old, respected title will get lost in licensing hell and won’t be seen again for decades (or forever).

I always like to see which titles make their way from the past to the present more or less intact. Often, they might even see a resurgence of interest that comes with a new reprinting, making it accessible to a new generation of gamers.

Survive has been around for a while, but it doesn’t feel like a grizzled relic in the same way that some others from its decade do. One look at it, and it invokes the feeling of a whimsical, gently thematic rush to safety (and points) that could be mistaken for dozens of other titles. When I look at a game design from 1982, I expect a bunch of rough edges that some will love but that are largely sanded away in modern designs, or odd component choices and a level or two of endearing or laborious clunkiness (depending on your preference). There’s none of that here.

Of course, the components and look have gotten a facelift from the earliest editions. And it’s a pleasant touch-up, which helps to bring alive the setting and theme. As you survey the island that you’ll be hurriedly escaping from, for me it evokes a sense of wonder and anticipation. If the 3D island tiles were less well crafted, this effect would be slightly, but noticeably, lessened.

I’m getting slightly ahead of myself.

Survive is a competitive game wherein you populate a sinking island with meeples of varying point worth (written on the bottoms). You can know where you place these, with the higher-point ones being more valuable to you. But once the game starts, you can’t check to see how much each meeple is worth.

Meeples only score if they make it to one of the safe islands on the board’s corners. During your turns, you’ll be deconstructing the island, moving meeples onto boats or into the water, and trying to paddle or swim to safety. Preventing this will be a host of monsters and hazards, which you can manipulate to stymie your opponents.

More or Less Than the Sum

We often talk about things that are more than the sum of their parts. Unless we drill down a little bit, this description is unsatisfying to me in its generality. I do think it applies to Survive, though.

To identify why, though, I’d contrast the game with others where I experience the opposite feeling: that the game has a bunch of good ideas but no coherent whole. Or, perhaps, a handful of extraneous elements that bog down an otherwise tightly-crafted experience. We’ve all played such games.

As a result of such games, I have an immense appreciation for games that seem to have what they need to deliver on their premise, and nothing more. There are so many modern games that some new games have this quality as well, but there are certainly others that, caught in the race to stand out in an ever more crowded marketplace, mistake “more” for “better.”

The other reason I feel this way is that no single element in Survive is terribly unique or exciting on its own. Maybe it was 30 years ago, but I can’t speak to that. And yet, I find myself giggling and shaking my fist in every session I play. So let’s break a few elements down.

The tiles themselves represent a very visual game clock as the island recedes, and it heightens the urgency throughout. Even well-regarded “race to safety” games like Forbidden Island don’t do quite as good a job of visualizing your oncoming doom. This is especially true as the waters begin to populate with monsters, making their depths seem more ominous even as the island shrinks. This lends a visceral quality to the proceedings.

Lastly, there are light “take that” mechanics in how you deploy the various creatures or monsters that lurk in the waters. But they never feel mean. I think this is due to how the game’s theme lends itself to a silly atmosphere, and how the dice rolls for monsters/creatures lend a random element to this feature. Hey, I didn’t want to make you a target, the game says, but you have three meeples safely off the island and just happen to be the only one next to this shark your opponent just rolled. Nothing personal, though. Them’s the breaks.

By and large, this approach works, and the player who slowly loses hope as their meeples are devoured or stranded is more likely to find the whole thing darkly funny instead of dispiriting. The game’s manageable length contributes to this as well.

None of those things are revolutionary, but they’re all small touches that work well, and more importantly, work well together.

Apparently, others agree. The game has received numerous implementations, a sequel that takes the premise into space, and an expansion that takes the base game to a maximum of six players.

The expansion adds a few bits and bobs (dolphins, squid, etc.), though the main draw is the expanded player count. I’m a bit wary of an expanding player count imbalancing some of the interplay mentioned above, but it’s also not a design that’s going to suffer a ton from throwing more people into the pile. My best advice for a general internet audience is that the expansion is not a necessary purchase unless adding a 5th/6th player will allow it to hit the table more often for your group.

Due to my small(ish) collection size, there are a number of titles that fall into the “always happy to play, but don’t need to own” category, and this is among them.

However, it’s one of the few that regularly tempts me to buy it, because I can see it happily sitting on my shelf (or, preferably, spread out on my table) for decades more to come, and with crowds as diverse as non-gamer friends, gamer friends, family and children.