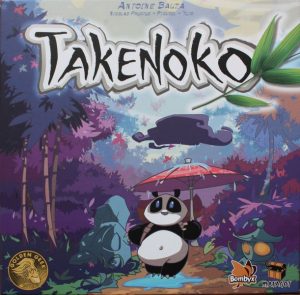 Look kids, it’s cute pandas! Look mom, you only need to take a couple actions per turn and they’re all pretty easy to understand. It’ll be fun! Look, regular gamers, you can form long-term strategies based on tile placement and your card draws to angle for the most points! Look, casual gamers, dice and random card draws! Those stuffy strategy gamers aren’t going to sap the fun out of the game. Look, impulse shoppers, beautiful components and quirky but accessible theme! Look, collectors, limited edition components that are even more beautiful!

With each new element of the game, you can see Takenoko casting a wide net to be able to appeal to all kinds of different audiences, each without alienating the others. Largely, I think it succeeds. I can’t imagine this being too many peoples’ favorite game (unless their main gaming group is family-oriented), but I can also imagine a lot of people pleased with the fact that they have it in their collection.

In Takenoko, there’s a man curating a bamboo garden in what looks to me like feudal Japan, and a panda running amuck in it, eating bamboo shoots. The garden itself expands in hexagonal tiles, each with varying properties. Players are capitalizing on the chaos, manipulating the gardener, panda and tiles to turn in cards with specific requirements on them, such as having a particular configuration of tiles, or having fed the panda a specific combination of bamboo types. They do so by taking two actions on their turn, as well as rolling a large, wooden die that will allow them certain other options depending on what die face is showing.

Feudal Japan is a loose setting here. The whole thing has been turned into more of a pastoral cartoon version of that period, and the tone of both the rulebook and components reflects this intent. The designer, Antoine Bauza, did much the same with Tokaido, another lovingly crafted game with a pastoral theme set in more or less the same time period, but with elements so stylized that evoke sort of a dreamlike version of reality.

One thing I really like about both games is that, first, everything flows into the pastoral, delightful experience. They’re games built from the ground up with a specific vision in mind. Second, they’re games that remind you to have fun. I mean, hell, try reading the rulebook and not cracking a smile at how cheesy it is (but pleasantly so). We lose sight of this, but let’s be real: a non-gamer doesn’t look at, say, A Feast for Odin and think “fun.” You and I might, but they don’t. Instead, they think “Holy **** what is all this nonsense and how can I avoid having to interact with it?!” Or they look at some train-based economic simulator and their inner monologue is just the sound of a sad thunderstorm.

Kidding. Sort of. But in contrast, Takenoko looks like fun, not in a gaming sense but in a universal sense. The game itself, thankfully, doesn’t disappoint.

Lastly, yes, the game is beautiful. Just looking at some of the more opulent setups people have, with enhanced and customized components, is Exhibit A for those who don’t mind games that are sometimes described as “overproduced.” I draw the line between overproduced games that enhance the game itself rather than simply being luxury items for the sake of themselves. The line is a subjective one, but I don’t think Takenoko crosses it, because I do feel more connected to the game because of the three-dimensional elements, awesome die, and other production elements.

If the game is shallow, all of the above is a moot point. It’s not the deepest, of course, but it’s not intending to be and there always seems to be plenty of decisions to make. The Chibis expansion (which is not being covered fully in this review) adds some new considerations that I think balance things out a bit, but the base game is indeed a lot of the things I mentioned in my opening paragraph, so it can and will appeal to a variety of people.

There will always be a need for such games, which are accessible to casual or non-gamers, short enough not to lose their interest, long enough and meaty enough for gamers to want to play multiple times, but with enough elements of both strategy and luck that neither newcomer nor experienced gamer feels like they’re out of their depth or being talked down to, so to speak. Plenty of games aim at this balance, and the entire idea of a “gateway” game exists to describe such games, but I just listed a lot of criteria in that last sentence. More often, a game will hit the mark on some of those criteria, but not each one. So when I describe Takenoko as a relatively universal game, that’s what I mean. And if I reserve the term for a select few, even denying games I enjoy the same distinction, it’s because they do enough to satisfy me personally but don’t check off each of those items.

For example, I personally like Tokaido just a bit more, but it’s less universal. It takes more time to absorb the odd movement and how each stop’s options correspond to the whole. In Takenoko, everything is writ large in just a few simple examples involving tiles, gardener and panda. I think there’s more depth hiding in Tokaido, and there certainly is after its expansion(s) are added, but that’s for me, not for, say, my niece, nephew or tired game group at the end of a night where we played a draining, three-hour epic. In those situations, Takenoko is the better palette cleanser.

Did I say anything negative here? This might be a first for a review. So ok, it may be too cutesy for some, or if you only play with regular gamers, you’ll likely graduate from this before long. There’s only so much to explore in it over numerous plays. There.

For all the praise I’ve showered on the game here, though, I don’t feel intensely about Takenoko. When I think about it, I imagine a light, fun time with friends or family. And I think that’s enough. It’s never going to ascend into my favorites, but is eminently pleasant and universal in a way that makes it valuable.