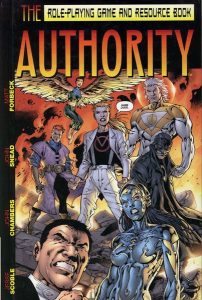 The Authority was a superhero team that existed in the (now-defunct) Wildstorm comic book universe. They were owned by DC Comics, but existed in a separate universe from characters like Superman and Wonder Woman.

The Authority was writer Warren Ellis’s take on the Justice League. It’s easy to think that it was simply a darker, grittier take on those archetypes, and there was certainly a little bit of that. But that misses the larger aim.

The Authority existed to create change in the world. See, superhero comics have a problem, because if they used their powers to their fullest to do good in the world, they’d alter the world to the point where it was unrecognizable compared to our own. And this doesn’t sell as well. So they maintain the status quo, so to speak, and only tend to intervene when there are threats that require their skills. To some, like Ellis, this seems at least mildly disingenuous to their potential, and to the types of stories that can be told.

So the Authority is what happens when superheroes realize they’re gods, beholden to no one, but also still want to do good in the world, and would rather work toward systemic improvement.

There happens to also be a lot of superpowered bad guys to deal with while they’re trying to do this (of course).

It’s very much adult-themed, and not just with language, sex and violence. The Authority kill the megalomaniacal villains. There are rarely any recurring villains in the series. They depose dictatorial political regimes and enrage world leaders. They’re also flawed individuals whose personas reflect the fact that they were experimented upon, have had to lead double lives, or have never been treated normally in their lives.

They’re not villains. But they’re also not exactly heroes, especially by the end of their comic run. There are a lot of shades of grey, and in some, more heroic comic universes (and indeed, some heroic RPGs), they’d undoubtedly end up at odds with the shinier heroes.

While not in the exact same mode, the rest of the Wildstorm universe (which, at its peak, included numerous ongoing books) matched tonally with The Authority. Occasional crossovers with the mainstream DC heroes also served to highlight the differences in the universe. Where Superman is a nigh-allegorical symbol of hope, Wildstorm’s heroes were often simply the lesser of multiple evils.

The RPG and The Comic

A large portion of the book is spent summarizing the comic, its protagonists and antagonists, as well as the larger forces in the world.

This isn’t a generic superhero RPG. It’s designed explicitly for you to play as The Authority (or your own doppelganger version). If that’s your hope, this is great. If you’re looking for a broader application, though, much of the book will be useless. 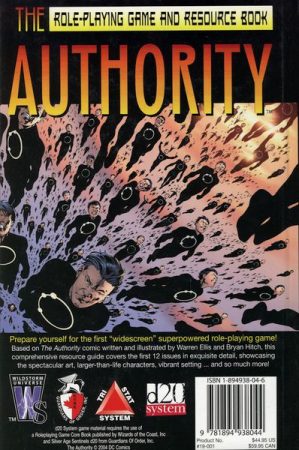 Silver Age Sentinels (SAS) is the base RPG system upon which the Authority RPG is based. I’m not going to go into a deep dive, but I do want to describe a key feature of the system.

The system can be “tri-stat,” or the three from that system can split into numerous skills. The designers recommend a more generalized tri-stat system for the Authority, because the narrative premise is intended to tell larger-than-life stories. To facilitate this goal, tri-stat is designed to speed up play by being less fiddly. There’s still math involved at most mechanical steps, but as long as what you’re doing is broadly thematic to your character and power set, it should filter into one of the three stat categories.

Groups will start at a certain power level (though there’s no rule stating all PCs have to be the same power level, to match with the variable power levels in the comics). Power levels are determined by the number of points you have to spend on your character. There are a host of attributes and powers, and very few of them scale linearly. At Level 1 of a certain power you might be moving cars. By Level 7 you might be dislodging continents from the Earth’s crust. At level 4, shrinking to the size of a cat. At level 10, exploring sub-atomic dimensions. That sort of thing.

The sheer variety of powers allows for a lot of customization, particularly because they have at least one “catch-all” power that allows for unique manifestations of your energies (which will likely need to be agreed upon with a GM). Many others are similarly open to interpretation, and some powers can be “overclocked” to temporarily achieve a higher level.

The math behind attacks, defenses, and energy usage (all part of character and/or ability stats) comes in to equalize stuff, so that the guy who shoots guns really good can still contribute on a team with the girl who can time travel. Not unlike comics once again, where the team’s strongest members should end a lot of conflicts before the others have a chance to do anything.

It also seems potentially intimidating for a GM, but rife with opportunities for challenges to give the players. Comics have a lot of conflicts that work due to rock/paper/scissors mechanics, and this is no different. Sure, you can lift a mountain and bathe in the sun, but if I telepathically flood your mind with all the dreams of those sleeping in Canada right now, what will happen? Or a sentient sun teleports the group’s city-sized spaceship into its orbit, hoping to merge with the ship’s nigh-infinite power supply. How does the group begin to handle it?

I didn’t endeavor to learn each intricacy of the system (I was reading for enjoyment, not to play), just the broad strokes. It seemed like owning the base SAS rules would help, but it also looked like everything you’d need to play was in the Authority book. By the end of the book, for example, I was following along in the play examples just fine, even if I wasn’t stopping at the few points where I would have had to look up a mechanic to fully understand how they got to a particular conclusion.

Does This Book Work?

I frankly can’t comment on the larger Silver Age Sentinels system as much as I’d like, and would probably need to read the base rules and maybe play a session (or at least see one played) to form an opinion on it. It seems like a fine system for handling large-scale comic book-style battles, but that may also be me imposing my expectations on the system. There were times when the math-work seemed complicated. No single calculation was difficult, per se, but to calculate damage in more complex fights, there was usually a string of additions, subtractions, multipliers and modifiers that I could envision slowing things down in the aggregate. But I also enjoy the free-wheeling storytelling the system tries to allow for.

Overall, I think the book works, if only because I picked it up hoping for a nostalgia walk through the Authority, while being able to conceptualize how they’d believably exist in a roleplaying setting. The book achieved both of these ends for me, so I’m happy.