The Mind Board Game Review 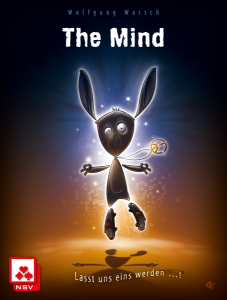 I scoffed at The Mind. Raised my eyebrow and grudgingly sat through a few sessions. Predictably, we lost and had some noticeable fumbles.

In my righteous condescension, though, I missed something during those plays: I was smiling or laughing almost the entire time. At least when I wasn’t nervously wondering whether to play a particular card, which is its own kind of fun.

It took me several plays to come around to admitting what I will now happily share: The Mind is utterly unique and can be quite delightful.

The Mind is polarizing, but only because it dares to do something that most games will never dream of: be different.

Different isn’t equivalent to “good,” but it’s a start. Let’s unpack why I think this game is both.

“It’s Not Really a Game, It’s an Activity”

I use this subheading ironically. Of course The Mind is a game. Several discussions surrounding it, though, will claim that it isn’t. Some will rework the definition of what a game is to conveniently leave out games that, to them, are too arbitrary to solve in a strategic manner.

Invariably, this assertion is combined with a dismissive attitude toward the game itself.

This is subtle gatekeeping, pure and simple. I dislike its use and disagree with it categorically.

If we squint, though, we can see where the argument originates. We’re not used to games that are so bereft of the mechanical and so steeped in the interpersonal. The Mind is a human game, in the deepest sense of that word. Take away the numbered cards and we might as well be staring longingly into each other’s eyes, with no other goal than to see what emotions it elicits.

If that sounds terrifying to you, maybe you won’t enjoy The Mind. For clarity, you’ll have a defined goal, so it won’t be as nebulous as my example above. But you really will have to stare down a friend as they do the same with you, and you both agonize over who should play their card first.

Let’s be clear: this is neither thematic nor deep. Nor complex. You’re trying to play numbers in the correct order, but without speaking to one another.

It’s absurd. It’s also great. This primordial simplicity again shocks our system, because even in old card games we played with our families growing up, there were some strategic intricacies to learn. Not so, here. It’s “do you or don’t you…?” for the entire game. The tension never lets up, and the minimal card art and rules overhead means that there’s nothing to get in the way of this feeling.

Perhaps this would become boring with enough time, but it’s a quick game. So it leaves you breathless, then packs up and leaves.

Drop the Pretense, Enjoy the Ride

I’ve never “won” The Mind, and I suspect I never will. Even in the cleverest or most fortunate of sessions, we’re eventually stymied by the increasing difficulty.

This is fine though, because up until the point where you lose, there is still hope. I never have the sense of defeat that I do in many other games, where it’s clear in, say, the last 25% of the game that I’m playing for pride, not for the win.

The early rounds of The Mind will give you some confidence. Or you’ll misstep and immediately become fatalistic. But then you’ll have a good round, and the “extra lives” and special ability cards (which let everyone discard their lowest card) will pile up a bit. Hey, you’ll think, we might even make it!

You won’t. At least most of the time. I guess I shouldn’t assume others are as inept as me. But almost invariably, something will become derailed. It will quickly fall apart. But there’s never any blame. You couldn’t have known I had the 36 when you were sitting on the 37 and 35 was face-up. Everyone laughs, shakes their fist to the gods of randomness, and either reshuffles to play again or moves on to the next game.

There’s some magic there, because there’s something pure about it. I’ve felt the crushing agony of playing that 37 a moment before I should, but have never felt like we needed to play the “what if” game afterward. The universe is capricious, but at least we had a laugh.

And if you do hold onto the 37 for a heartbeat longer and everything goes smoothly, oh boy, you’ll feel it in your soul.

Legacy of The Mind

The Mind is unique, but it still has a lineage. The blandly (but amusingly) named “The Game” preceded it. The same DNA is present here. But rather than add on mechanics, as we usually do when we add a twist to an established game, The Mind stripped The Game bare. It’s better off for it.

Others have followed, and will continue to. In fact, one of The Mind’s spiritual successors, “The Crew,” even won the coveted Spiel des Jahres in 2020. I’m far less enamored of The Crew, but I’ll probably leave that for another review.

So we haven’t seen the last of this idea. I’m not entirely sure it’s one that will benefit from adaptation, since it’s so weird. But the same could have been said about Hanabi back when it came out. Hanabi is a clever idea but a pretty sparse game. Copycats have come along that, to my eye, take its central mechanic and improve upon it by putting more robust gameplay around the mechanic. So maybe someone will surprise me by building off of The Mind in a way that enhances the experience (some might say The Crew already has).

Until then, though, The Mind is a simple game, but a powerful one.

For more content, or just to chat, find me on Twitter @BTDungeons or simply explore the site.