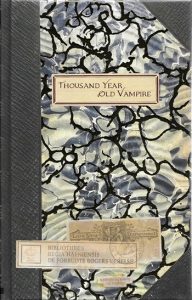 Thousand Year Old Vampire is a solo RPG intended for mature audiences. Rather than mature for reasons of violence, the maturity comes as much (or more) from dealing with heavy issues such as aging, loss, despair, rage and other dark emotions that can take hold of a life as it twists and turns.

The game plays out over a series of prompts, which you can resolve in as much or as little detail as you like. Together, these prompts form your story, and you jump forward and backward between them via dice rolls (d10 result minus d6 result). Each prompt has its own page. If you land on the same prompt a second or third time, you go to a second or third prompt on the same page that builds off of the first. Some of the most dramatic outcomes are buried in these deepening secondary and tertiary prompts, since you’re sinking into a specific plot beat to see how it affects your character.

You will forget memories (responses to prompts) as you age. This encourages you to change the character in dramatic ways as earlier core memories are replaced with others that lead you in unexpected directions.

There are a few basic stats. Most involve simply tracking skills, NPCs and resources. But it’s very rules-lite, and is intended as a narrative experience.

The game encourages you to use a computer or notebook to track responses, but you can also simply recite your answers to yourself as you read through the prompts.

Solo RPGs are a time-honored genre. And while this is a solo RPG, it’s also something else.

It’s solitary. Lonely. And often (though not always) bleak.

The game openly suggests that if you are prone to depression, this might not be the game for you. If, however, you enjoy exploring shades of grey in a character and their morality, and the consequences thereof, there is a lot to explore.

For clarity, it’s not invariably dark. My first session ended on an unexpectedly hopeful note, for example, and had ample amounts of touching humanity in it. But it was also on the knife’s edge of being a lot less redemptive and hopeful for the entirety of the session. A few stray dice rolls and I would have been writing a deeply nihilistic tale instead of a heartfelt tribute to friendship. But both are possible.

Roleplaying is about discovery. Usually this is through semi-improvisational collaboration between players and a Game Master (GM). But without a GM or other players, you’re discovering the story on your own.

And it’s a true discovery here, because you won’t be able to predict what will happen. In the days leading up to playing for the first time, I plotted out some basic character concepts for my vampire. Naturally, as someone who enjoys storytelling, I started imagining plot beats as well. I had some stories mapped out before I ever sat down.

And then that all went out the window, and I ended up creating something more nuanced than I could have initially imagined. Granted, a couple small ideas from my earlier musings made it into my eventual session. But the rest was reactionary, and thrilling for that fact.

I’m a writer; it’s largely how I pay the bills. I also enjoy writing in my free time. So it’s not an insult to say that this felt like a very intricate creative writing prompt at times, more so than a true roleplaying game.

The line between the two is fuzzy, of course. But though I was invested in the stories I told in the game, and used first person perspective when telling their story, it wasn’t “me” in the story in the same way that, say, my D&D characters feel like an extension of me.

The stories were harrowing and thoughtful, for clarity. I created each one with the urgency and interest of a good page-turner book. But it was the subtle distinction between inhabiting a character and writing one into existence. Both can be intimate endeavors, but they aren’t equivalent.

This is neither praise nor criticism, but rather an observation. I worried for a bit that this game would fall flat for me, because usually for me to truly be invested in roleplaying, I need the presence of others to act as inspiration. Instead, I found the game a bit more meditative, and my own persona a step removed from the protagonist, which turned it into an act of pure creation rather than a performance for no one. This, I think, helped save the game for me.

The Flexibility of Good Storytelling

One of my possible faults with the game (covered in more detail below) is that you’ll eventually see many of the same prompts when playing multiple times. So will that always mean you’ll tell similar tales?

Maybe. Though I think it can be avoided with some creativity in how you interpret and execute the game’s structure.

I like taking games that are deliberately loose in their rules and thematic trappings, and seeing how I can shift them subtly into other forms.

I’ll give you an example: who says your character has to be a vampire? Sure, it’s in the title, but any more-or-less immortal character will suffice, and fiction has given us hundreds of other ways for characters to live long lives.

Also, who says it has to be set in the real world? The book encourages you to explore history through its prompts, or to imagine the future. This is great. But I’m not a history buff, at least not in ways that let me easily traverse 1,000 years and feel like I can evoke the historical setting well. So this part was actually a little bit intimidating to me.

So in one of my earlier sessions, I set it in the world in which I play Dungeons and Dragons. This allowed my vampire to exist alongside other fantastical creatures. The same themes were present, but the geographic trappings were all different.

And it worked great. I may even use that particular vampire as an NPC in a D&D campaign I’m running later this year.

So that’s what I mean when I say the premise is flexible. And this gives the game longevity and replayability.

Despite what I said above about flexibility, it’s true that even in just 2-3 plays, you’ll see many of the same prompts. Hopefully the particulars of your creation will allow you to change things up from session to session, but even the suggested alternate prompts at the back of the book don’t quite bridge this gap. As a result, after a few sessions, I’m happy to leave this book on the shelf for quite a while between subsequent sessions.

The other issue I see is when dice rolls take you backward more often than chance would predict. The book says a “long” game takes about two or three hours, but when I was writing a short paragraph per prompt and getting a lot of backward rolls, I found that I was making slow enough progress that three hours would be at the low end. Fortunately, it’s a game you can play over multiple days. But there’s a point of diminishing returns on prompts, after which the story becomes too unwieldy for its own good. If I got too many prompts, I stopped being able to make sense of it all, and the overall narrative felt arbitrary as a result.

Point being, there seems to be a sweet spot to create a satisfying narrative without things becoming confusing, and it’s possible to overshoot this mark by several dozen prompts.

I remedied this with a small house rule that went through a couple iterations. I stopped going backward in my first session, and backward rolls would keep me on the same page. This was a bit too far, so I eventually changed it so that I would only go backward on every other backward roll, and would stay on the same page otherwise.

This helped. And it helps that the game doesn’t break under such rules tweaks. But it’s a minor consideration for those playing.

I like good storytelling. And introspection of the human condition. And writing. And so I like this game.

I’d call it a delight, but that’s not the right word. It’s thoughtful and patient with you in a way that too many games aren’t. It lets you set your limits, choose your themes, and see them through to their logical—sometimes sobering—conclusions, all without resorting to shock value and other cheap tricks of some supposedly “adult” games. You can have shock value, and violence, and gore, and all manner of those things in your sessions if you choose. But they aren’t thrust upon you, and instead you’re asked to ponder the deeper motivations underlying your conflicted and monstrous characters. This is the harder but ultimately more rewarding task.

I wrote a couple session reports based on plays of this game. They’re linked below. Enjoy!

The Tale of Saladin

The Tale of Iri Thorgrimsson