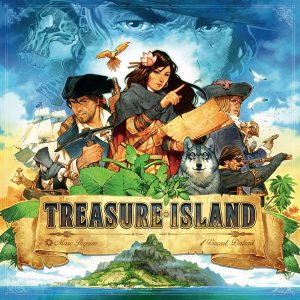 In Treasure Island, you will either play as Long John Silver or a treasure hunter. Silver is locked in a tower and being…”interrogated” for information on his treasure. He has to parse out clues to the players – some to individuals, some to the whole table – while they search around the island.

Crucially, some clues can be lies, and even if most are true, it’s hard to know which is which. Players have unique abilities that grant small perks and can use their knowledge to slowly zero in on the treasure.

After a certain number of turns, Silver escapes and can make a run for the treasure himself, stealing victory away from the players. In all of this, you’ll literally be using rulers and compass drawing tools to mark up the main board as well as your tiny recreation of it behind your player screen.

Treasure Island has so much going on, and pretty much all of it is great. Let’s go through some of them:

Deduction – Not only are you using private and public clues, but you’re watching the actions of other players to determine what they may know from their own individual clues. You can’t fully trust any action, but you also can’t fully discount any action. It’s a delicious mix of calculated deduction and nervous second-guessing.

Cat & Mouse – The sense of adventure as a treasure seeker is palpable, both the excitement and frustration. As Silver, it’s just as fun watching the players try to decode your clues (or lies). You’ll feel the twinge of terror as someone walks right past your treasure, and the smug relief when they guess incorrectly at its location.

Time & Pace – The game doesn’t overstay its welcome, and generally leaves me wanting more. The 45 minutes it lists is probably about right if everyone knows the game, but also seems shocking to me because it feels like so much more game is packed into that window. There’s some downtime, but also plenty of excuses to watch the actions of other players with interest, so you never feel like you’re waiting long.

The lone caveat to that is that I’m not sure its full 5 players is going to be consistently good. It drags just a bit too much for me at that count, not giving any one player quite enough to engage with, relative to the whole.

Not Quite Co-op, But Sort Of? – It almost feels collaborative at times, despite being explicitly adversarial. Players will usually start to talk among themselves about the public clues, openly theorizing about which could be true and where the treasure might be. Sound weird? It’s not. In nature, there are species of birds that are individually less likely to be caught by a predator if they’re silent, but if they all make noise when they see a predator, the group’s collective survival chances increase, so natural selection favored it in many species. In Treasure Island, maybe your theory helps another player find the treasure, but your collective theorizing increases the likelihood that it will be found at all. An odd analogy, I’ll admit, but I like it. I also like the phenomenon at the table that the analogy speaks to, since it’s an incredibly unique dynamic in board games.

Tactility – You’ll literally have a map that looks like it belongs to a deranged conspiracy theorist by the end, and will have physically traversed it with marker lines, your character token, compass lines and more. It’s a wonderful application of the tactile thrill that board games are so good at creating.

Treasure Island initially looks quite opulent, and in many ways it is. However, the map itself is very dense with various elements that could be important. This is fine in and of itself, but becomes a bit of an issue when it’s hard to see everything or make sense of it all, especially when the elements often apply to clues.

Escalating the problem is that some of the marker colors it comes with are miserably hard to see on the board, either the public board or your player map. If you have the green marker, for example…I’m sorry.

This game is so good that this doesn’t kill it for me. Not hardly. But it can be a bit rough for some as a result, and I also can’t imagine someone who’s color-blind being able to play at all. Thus, I hope the game receives some future printing with these issues addressed.

The box’s 45 minutes are for a full game, but make no mistake, this game could be over in 10 minutes if someone is very lucky. You can also have games where everyone makes the wrong moves and doesn’t come anywhere near Silver’s treasure.

I’ve actually seen both, and frankly enjoyed both, because the former is an example of something I find kinda funny, and the latter is an example of some nicely deceptive play that should be rewarded with a convincing win. Both of those outcomes will feel anti-climactic in other groups, though, so gauge your interest accordingly.

The other point is that both of those instances are rare. The game seems well-balanced to create a rising sense of tension, with the final few turns either glorious in the triumph, or agonizing in how close the seekers came to finding it.

I’ve also seen treasure hunters win more often than not, but have seen claims of the opposite, that it’s too easy for Silver to win. Given that both are entirely anecdotal, I feel safe in saying either outcome will be eminently possible for groups.

We could create all kinds of arbitrary lines in the sand to shower praise on games, like “favorite worker placement game that also includes dice and multiple tech trees.”

However, when I started to think about how to sum this game up, “my favorite game under an hour” flashed through my head, and that seems like a respectable title for a game to have. For clarity, I don’t actually know if it holds that personal title for me. There are at least a few others in the running. But it’s definitely in the conversation.

I mentioned that it leaves me wanting more, and I think that’s a takeaway that plenty of games could learn from. I don’t know that Treasure Island is the best deductive game, or one-vs-many game, or best pirate game. It won’t be for some, despite the merits I listed above.

But all I really do know is that I want to play it. Like, right now. Alas, it’s 12:30am during COVID-19 lockdowns as I write this, so that desire will have to wait to be fulfilled. But it’ll be a rollicking mess of fun once it is.