Two Rooms and a Boom Review

Problems and praise in a wildly social, deduction party game. 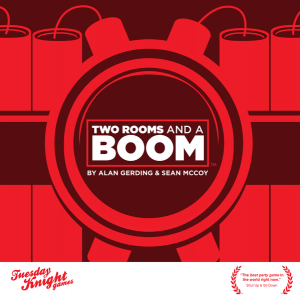 With the world of board games being as vast as it is, it’s usually the case that some other game existed with the same idea before an “innovative” game came around. I don’t know what that game is for Two Rooms, but I know that, at the very least, it popularized an innovation in social deduction that was revelatory for many gamers, myself included.

In the time since, I’ve had some sessions of it that I think have revealed some flaws, but I still remain in awe of the controlled chaos it manages to bottle.

Two Rooms and a Boom – The Premise

You separate into two teams and literally head to two different rooms or areas for a prescribed amount of time (never more than a handful of minutes), elect a group leader, then can share either the team you’re on with other players, your role on that team, both of those things, or neither. The goal is to figure out who you can trust, then manipulate the game to achieve your ends.

The ends are one of two things. There’s a President role – who has to meet with a Doctor – then has to not be in the room with the bomber at the end (which represents the titular “Boom”). Meanwhile, the Bomber needs to meet with an engineer to activate his ability to, well, boom, then wants to be WITH the President. The game plays out over a handful of rounds (it changes based on player count) and team leaders (who can be voted out) send a prescribed number of people to the other room at the end of each round. It’s in this way that information travels between rooms.

Roles vary wildly. There are two main teams, but also a host of ancillary roles that have an individual agenda that may or may not be able to coexist with the goals of either team.

Two Rooms is a game that isn’t afraid of things like playing dirty or sowing confusion. For example, the rules explicitly state that it’s acceptable to simply steal glances at other players’ cards, even if they aren’t willingly showing them to you. I cackled when I read this rule, then gleefully shared that knowledge with some friends. I was so excited that I couldn’t keep it to myself. I’ve played entire rounds simply circling in the background to get a peek at various card colors as players share with one another, to then report to our team leader (if the leader is on my team) or another I can trust.

There are also Spy cards, which are essentially traitors. They’ll have a red card (Team Bomber) but secretly be working for the President. Or vice versa. Then there’s the Coy Boy, who isn’t allowed to share their role, so the Spy can always claim to be them. Or that person acting all shady might be the Bomber, or it might be a neutral player whose victory condition means they simply want to die in the explosion. Morbid comedy abounds.

I’d love to think this is just my play group, but I’ve noticed a problem among several varied groups. See, in the first round if you’re not a Spy or Coy Boy, you’ll happily share everything with other members of your color, which then reveals who the other team is. So everyone figures out everybody else’s team in a hurry, and the Spy/Coy Boy are isolated, even if you’re not sure which is which. By the second round, this information passes to both rooms, and industrious players are generally going to be able to make sure the right combo (e.g. Bomber/Engineer) meet up. Suddenly, it’s not a game about bluffing and second-guessing and deducing, but becomes a huddle with the people you can trust, deciding one of two things: can we keep or get a leader elected from our team? And who do we send over to the other room in the last round to try to have the President and Bomber meet or not meet?

There’s not a ton to discuss in those two questions, and not a ton more information can be gained because everyone’s huddled with their team and unwilling to chat with anyone else. I’ve had rounds of just waiting around as a result. Short rounds, granted, since they’re all short, but still without meaningful intrigue. Those games inevitably end in what more or less amounts to a coin flip, which determines whether or not team leaders (almost invariably on opposing teams) send or keep the right person.

There are other ways the game can play out. And other roles that can add some variance. I’m railroading things in this scenario to make a point. But I’m also kind of…not railroading? And it’s because this is how most of my games have played out, regardless of roles. It’s tense, sure, and it’s triumphant for one side and agonizing for another, both hallmarks of a great game. But it’s all kind of the same. And also feels arbitrary. Sure, we can kick ourselves for not sending the President over in the last round, not realizing the Bomber was being sent to us. There’s never any way to know that, though, so I never feel like my team made an incorrect decision, it just feels like we got unlucky.

And imagine the Coy Boy in this scenario, ostracized by both teams. That player isn’t having the best time.

To play devil’s advocate to my own criticism, if a Spy gets lucky with a Bomber/President who is willing to quickly share their whole card, one team has both pieces of the endgame puzzle, which can be powerful. Some of the neutral card abilities can also inject some additional chaos. However, those possibilities have been comparatively rare in my plays, and it also doesn’t mitigate the insular huddles that stifle inter-team interaction that is the hallmark of so many fine social games.

I’m not the only person to notice this fault of the game. Responses to it generally involve describing how the scenario should ideally play out strategically to avoid this. But when it does happen with regularity, as it will for some groups, it’s an issue.

How I Learned to Stop Worrying and Love the Bomb

Excuse the obvious pun. Sometimes when it’s staring you in the face, you have to use it simply to get it to stop bugging you.

In any case, I stand by that critique above, but it ultimately doesn’t sully what’s at the core of this game: chaotic, tribal fun. That earliest round of shifty glances when someone won’t share with you is priceless. Trying in vain to convince someone you’re the President (when you’re not) without showing them your card is hilarious. When everyone gathers to reveal the winner(s) and loser(s), it’s guaranteed that roughly half the room will yell in joy and the other will yell in heartbreak. These are great moments, and they’re ones that few games can reliably deliver.

This is social deduction on a constant timer and plenty of pressure. I feel like there’s a Euro gamer or two (or a thousand) out there for whom this game is their nightmare. It also requires a lot of people – like, 10 or more – to really make it shine. Smaller game groups need not apply.

Two Rooms has warts, enough that I don’t want to play it too often. The experience – innovative as it is – would become stale. But I do want to play it, because it still delivers particular thrills that I haven’t found in another game.