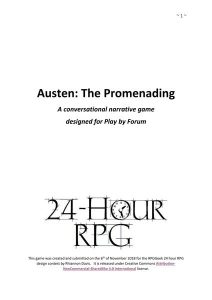 The Premise
Owing to Jane Austen’s famous layered and nuanced dialogue, The Promenading aims to recreate something of this oblique intrigue in a roleplaying format.

This game was created explicitly for play-by-forum (PbF). While the text has footnotes on adapting it to an in-person game, it’s clear what the intent is. This focus is a good thing; in designing it explicitly for the slower-paced PbF atmosphere, it allows players to craft thoughtful conversations that they might otherwise be unable to conjure if they were put on the spot in a live game. Few of us are as eloquent in our improv as we are on the page.

In brief, the game will take place over a small number of rounds featuring a seated portion, wherein you can only talk to those next to you, and a promenade portion, wherein you’ll be paired off with something and able to talk to them specifically. You’ll have a desire/goal that one other player can affect positively, and another can hinder. You’ll also be able to help/hinder players. You have two stats – Reputation and Status – which you can use to manipulate your seat position and promenade partner, and the rest is mostly left up to the intricacies of dialogue. Your conversation must be polite and can’t be too forward, so there’s a verbal dance you’re expected to take part in.

Lastly, this was created in a 24-hour period, and the author is upfront about the lack of playtesting and possible need for rules tweaks. This review is with that small window of creation in mind.

The Central Conceit
I’ll be honest, the idea of this RPG tickles me to death. There’s something perfect about its specificity. We can all conjure up rich conversations of Regency-era intrigue in our minds, and this is a chance to experience it firsthand. More than anything else, this RPG sells me on its main idea alone.

Further, I applaud an RPG explicitly created for PbF. There are even specific instructions for setting things up on RPGGeek. If this were to receive edits or wider distribution, the author would need to generalize these instructions, since a few are very specific to RPGGeek’s forums and functionality. But, given the current audience, there’s no issue here and the instructions are very helpful and thoughtful about the realities of PbF games.

Questions and Possibilities for Refinement
Perhaps you don’t end up paired with your preferred conversation partner(s) over the course of the game, but at a guess based on the point system, it seems likely that everyone will indeed get their chance to talk to their preferred partner. At that point, assuming all players are not being bad sports and are doing their best to stay within the idiom of the game, I don’t really see how you could fail in your goal.

Granted, the conversations themselves are the point here, so maybe it’s not the creator’s intent to create too much antagonism. However, I could see a variant of this game being fun wherein you have your goal, but also have the secondary goal of preventing another player from their goal if you are the PC who can hinder them. You’d likely have to increase the Round count by one. But if might create more drama around when and how to spend your Reputation and Status points. Imagine being flanked by two people at a dinner table, warring for your favor (or disfavor) in some area, through the medium of polite conversation. The tension would be thrilling.

The game does leave open this exact possibility, but it’s optional. If I were playing in a game of this, I might request that this not be optional, perhaps with a discussion on whether or not that would necessitate any changes in stat values or round count.

Conclusion
As it is, there’s still plenty of opportunity for thrilling and/or interesting interactions. The roleplaying potential alone is – again – highly intriguing and will easily capture the interest of anyone who has ever wanted to luxuriate in the type of setting that Jane Austen popularized.

Not only do I enjoy the premise, this is one of the few contest-based games I’ve memorialized in the Geeklist I keep of games I hope to play one day. I haven’t the bandwidth to commit to a months-long PbF at the moment, but once that changes I hope to find myself a game of this unique gem.

You can download this RPG for free on RPGGeek!