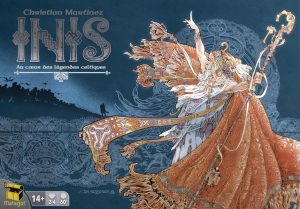 Recent “New to Me” Game: Roll for the Galaxy

A fine enough game, but severely favors those who know the game well. Despite being able to learn games quickly these days, the “expert” at the table did indeed destroy the rest of us while we stumbled to figure out viable point engines. I think I prefer its non-dice-based cousin, Race for the Galaxy, which was a bit more intuitive for me.

I enjoy a strong amount of player interaction, while also wrapped in a good strategic puzzle. Tammany Hall meets both criteria, and gets quite cutthroat and complicated within its relatively simple base structure. I feel like there are games that didn’t catch on enough when they were first released, and will always struggle to enter the canon of popular modern board games. This may be among those unfortunates, as I’ve not heard or seen much on it outside this one play.

Best of the Best (in my personal top games): Inis

Mirrors Tammany Hall in some broadly thematic ways, including that area control is a central mechanic. It’s a delightfully complex strategic puzzle within a fairly elegant set of easily-taught rules. It’s also brutal in many games, with wild swings of fortune as a result of clever combinations of special abilities and drafted cards. I am constantly trying to get this to the table, and have been successful a few times in recent months (and many more before that). Its lone expansion is also a good addition and takes the game to a wonderful five players without lengthening the play time.