Gardens of Babylon and After Midnight Games 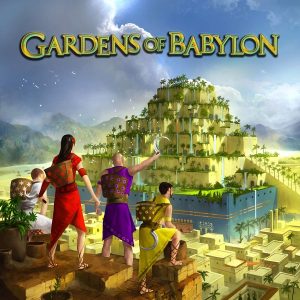 Best Recent “New to Me” Game: Gardens of Babylon
While other kids were doodling in school, I was drawing mazes. As I refined this practice, my mazes became wonderfully complicated and intricate. While it never progressed beyond this idle practice, as a result, I developed something of an appreciation for similar intricacy in art. This extends to board games. So it it a compliment when I say that this new game – Gardens of Babylon (GoB) – looks and plays quite like a maze. From a distance the tiles all look similar, but it belies a lot of subtle differences that create an eye-popping puzzle. The gameplay reinforces this, and it becomes a satisfying, “thinky” puzzle to solve, while others are trying to do the same.

The “thinky” style games can be enjoyable, but eventually lose me if I am able to stay in my own little world the entire time. So it’s with some relief that I say that you need to be watching everyone on the expanding tableau in GoB in order to have a shot at winning. It’s still potentially prone to AP, and involves a lot of inward-facing sorting of tactical decisions, but was ultimately a refreshing and cool experience.

After Midnight Games
I attend all 24 hours of a marathon charity gaming event each year (though likely not here in 2020 for obvious reasons), as do some friends. My collection – as well as the collections of those friends – include a few titles that we refer to as our “after midnight” games. Our brains collectively lose some of their analytical power, and everything takes a bit longer, so we aren’t pulling big-box strategy games at 3am.

Some of these games are fun at any time. But there’s a particular hilarious joy when, for example, someone is forming clues in Concept at 4am that makes perfect sense to them, yet no one is able to understand it and we learn that it still doesn’t make sense when explained later.

Others that fill this gap nicely are Cockroach Poker, a game I enjoy at any time but particularly when sleep-deprived; Flizz & Miez, a German game without an English version that involves making cat and car noises over and over again in a race against your friends; Magical Athlete, an almost entirely random game that still feels satisfying. The list could go on, but I love finding these gems that are unapolagetically stupid, but have a wonderful niche in gaming as a result of that fact.

RPG-Inspired Board Game: Mouse Guard: Sword and Strongholds
I bought this because I liked the Mouse Guard comics and RPG. It’s a delightful 2P abstract game with a bit of luck mixed into the light strategy. We play a lot of “serious” games in today’s hobby. An unashamedly pastoral experience is a breath of fresh air on occasion. This is an excellent way to pass 15 minutes with a friend.

Best of the Best (from my personal favorites): Paperback
I don’t like Scrabble, and I don’t like Dominion. Paperback is a near-equal marriage between those two games, so it’s always a minor shock to me that I love it so much. I think it has to do with the fact that it rewards lexical ingenuity, as opposed to Scrabble, which seems to reward whoever has the most 2- and 3-letter words memorized to squeeze out the most points. One time in Paperback I ended the game (and won) with the word “Abominable” and it was, for some reason, a high point in gaming for me that I remember years later.