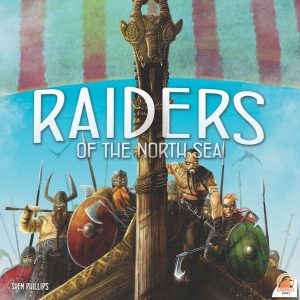 Most Recent “New to Me” Game: Raiders of the North Sea

Worker placement games are a crowded market, but this one was satisfying. I think I would always prefer it to the more well-known Stone Age, and it approaches a level of enjoyment that I have for some favorites in the genre. The fact that the game changes dramatically as it progresses is notable, since other games can feature engine building, but still feel more or less the same in the middle as they do at the end. You’ve likely built up some efficiency, so you’re doing everything faster, but it’s the same process throughout. Not so here, since you begin by collecting resources and end with an intense race to be the first to raid certain locations, which gives an urgency to the proceedings.

It’s…a game. I dunno, I could see this being a compromise when you just want to play for 30 minutes before deciding on a meatier game. But I wouldn’t go rushing for it. Inherently random, the card gags quickly wear off, leaving a lackluster game that’s best left in the early 2000’s where it came from, in a time before dozens of similar games surpassed it.

There’s a trend in modern gaming that is neither good nor bad. Well, actually, sometimes it’s bad. The term is “overproduced” and it generally refers to components that are detailed, flashy and impressive. And expensive. The gripe is that it drives up prices. You might pay $90 for a game where $60 of that is going toward miniatures. Many would prefer to pay half that and have, say, wooden tokens. And to be clear, I like a fair number of games with really nice components. I actually don’t mind spending a lot sometimes if I’ll love a game. I also don’t think every game needs to be in every player’s budget. But gameplay is the crux of a game, so if a game is lacking, it makes the price tag and shelf size all the more onerous.

However, I want to take that term – overproduced – and extend it to the gameplay itself, because I think there’s sometimes a correlation. With designers and producers warring with each other for consumer attention, there’s a “more is more” mentality that seeps into some games in terms of not just components but mechanics as well.

Mysthea is overproduced in every sense of the word. I got the sense that they tried to stuff it with not just expensive components (of which it has many) but as many types of components and types of mechanics as possible. The result is a miasma of mechanics struggling to develop a sense of identity from beneath the weight – literal and figurative – of everything involved. It’s as if someone ran a design contest, picked the best three games, then threw them in a blender and poured out the result.

Your first session will be at least three hours (not including teaching, which is a half-hour task). If you’re playing at max players, I’ve heard you’ll want to allot 4+ hours. I don’t mind length in and of itself, but it better feel like a profound gaming event to justify this. I enjoyed several individual turns in Mysthea, and there are indeed nice components, as well as lots to think about and some clever mechanics in play. It just never coalesces into anything remotely close to what it would need to be in order to justify its price tag or length.