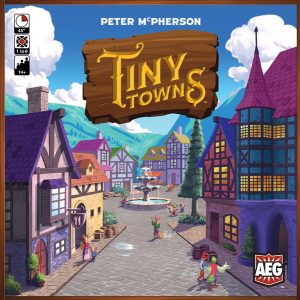 Most Recent Game(s): Tiny Towns
Tiny Towns is a clever little puzzle of spatial logic, but I was expecting something more for one of the buzziest games of the last year. In this case, there was literally no player interaction, as you’re locked in your own little world for the duration. At one point I looked up and surveyed the table (six of us) and I was the only one to do so in a nearly 30-second stretch. This is, to me, at best a palette cleanser between meatier games, and there are others that amiably fill that niche for me already.

Most Recent Game(s): Bruges
Speaking of low interaction, Stefan Feld designs are known for being intricate, interesting puzzles, but not as known for their interpersonal dynamics. So it’s with some surprise that I enjoyed Bruges as much as I did. Of course, there isn’t zero interaction, but it’s also not the highlight of the game. After some thought, I attributed my enjoyment to the fact that there are enough different, interesting things going on that I sort of forgot about the lack of player interaction. The elements amounted to about four different types of point tracks, each of which felt markedly different but still thematically on-point. And the buildings you build (or, more specifically, their inhabitants) help to enhance those tracks, adding variance to various players’ experiences. And maybe that’s the trick: if you get lost in the puzzle to a deep enough degree, it’s personally satisfying. I suppose my threshold of enjoyment is higher than most to get lost in a more-or-less solo puzzle, so there are many (including some of Feld’s other designs) that won’t scratch the same itch, but I’m glad it can happen so that I’m not relegated to enjoying only specific types of games.

Best Recent Game: Targi
Targi is longer than many 2P-only games these days, clocking in at around an hour. But its modular, eminently variable board (i.e. card tableau) and clever worker placement mechanic was a fresh take on that mechanic. A savvy enough interpretation of your opponent’s plan can yield more strategic blocking possibilities even on a board rife with options that are at worst serviceable. I don’t get to play many 2P games, but hope I get to return to this one eventually.