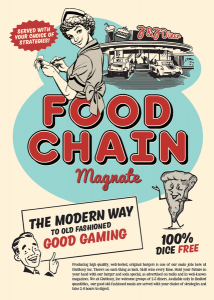 There’s a lot to recommend FCM, because there’s a lot, period. It’s technically a perfect information game, but never feels like a strict optimization puzzle like so many more-dry Euros, because you’re in a constantly shifting environment as a result of player actions and competing with others for the same sales.

It’s a dense game that can be unforgiving to someone learning (a buddy of mine finished his first game at $0). But there’s a hardcore crowd that – justifiably – loves exploring its depths.

Speaking of games with a lot of everything, Mage Knight is initially overwhelming. I felt like I was playing a heavy exploration dungeon crawler, and hadn’t scratched the surface of its possibilities…and I was only playing the introductory tutorial scenario with my friends. So at first, my brain just sort of said “this is too much.”

But I do get the appeal, assuming you’re playing with the same people over and over. Or solo, since it’s apparently a great 1P game. And it’s because once you grok the basics, you can tailor the experience in hundreds of ways, many of which will be great for your play group or play style. I frankly don’t want to dive that deep, but will happily join my friend who owns it in an occasional play.

Dragon Castle holds 2-4 players, and plays in under an hour. It uses Mahjong-style tiles in a variable “castle” structure, from which you pluck tiles and play them into a personal tableau based on certain rules. I almost gave up on this one, because, despite having lovely components and being clever enough, I played at 4P and it felt insular and a little random. But then I played at 2P, and the game came alive.

At 2P, it’s less reactionary to whatever tiles are available and allows for longer-term insights. Having two also gives you more opportunities to stymie your opponent with nuanced, oblique decisions. The strategy opens up, basically. The optional Dragon and Spirit Cards are also necessary for added depth and options.

Most games have a “best” player count, but it’s rare for a game to elicit boredom from me at one count but excitement at another. Dragon Castle is one such game.