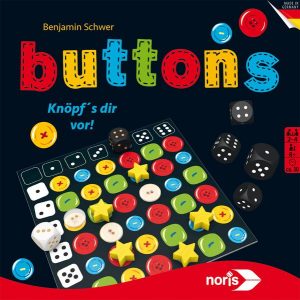 Buttons is an entry into the “press your luck” genre. It’s an inoffensive but ultimately forgettable title, and I’m reviewing it as much to compare it to other press your luck games as I am to discuss the game itself. I think there’s a reason some work better than others, and Buttons shines a light on this reason.

A Comparison to Can’t Stop

Can’t Stop one of the oldest and certainly most distilled versions of a press your luck game as exists within the hobby. You roll dice, you decide how to apply the dice, and you decide whether or not to roll again, ad infinitum. Simplicity itself. At a glance, Buttons feels similar, but with a colorful coat of paint over it in the form of the titular buttons. Buttons, however, introduces a small minigame on top of the dice rolling because of your button-laden player board. You are assigned a couple colors each round that offer bonuses if you cover enough in those particular colors, and you can’t cover a button that’s adjacent to another you’ve covered. Harmless enough.

Here’s my question, though: what does this minigame add to the drama of press your luck? Certainly, there’s one more layer of decisions to make, which sounds like a good thing. But the core of any press your luck game is how much tension it can pack into those moments of success or failure. Can’t Stop is a laughably simple game, but it’s a heart attack over and over again, with nothing muddying the waters between those moments. If you don’t enjoy that feeling, the game isn’t for you, but if you do enjoy it, it mainlines the feeling directly into your veins. Can’t Stop is that moment, over and over, and nothing else, and there’s power in that focus.

Buttons is muddied, to stick with the analogy. Not insultingly so, mind you, but any amount is enough to be noticeable. Your button decisions are the bean counting between the tense moments. And when it’s your opponents’ turn, their golden-pipped dice may or may not give you an extra button to cover. There’s no extra drama here, just the occasional moment of “oh, that’s nice” before sliding a chip over a button. Same with your button-covering decisions, which occasionally produce a good either/or, but most times it’s obvious based on what will give you a bonus, or it’s an arbitrary decision since which is better will depend on future rolls of the dice.

The extra layers of decisions, then, offer very little in the way of strategic depth, and serve to partially cover the tension of the central dice rolls.

So the game is fine. But when quicker options exist that are arguably more consistently tense (Can’t Stop) and others offer deeper strategic complexity and more interesting variance (Quacks of Quedlinburg, Celestia, among others), what niche does Buttons serve?

Someone out there enjoys it, and isn’t wrong in that enjoyment, but I fail to see how it meaningfully differentiates itself in a genre replete with better options.