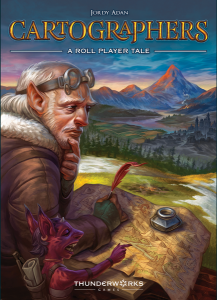 Cartographers is a recent entry into the quickly expanding world of “roll & write” games, of which this is in a subset sometimes referred to as “flip & fill.” The idea is more or less the same: roll a die (or in this case, flip a card), and write/draw/fill in the thing it says on your personal sheet.

In Cartographers, you’re given an 11×11 grid to fill in with varying shapes of a handful of terrain types (differentiated either by color or by little symbols you’ll draw into each square as its filled in). There are four cards – randomly drawn – that show you how your expanding creation can score points, which are tallied in four scoring rounds. In each round, only two of the four victory point options are scored.

The cards and sheets are all fine, and the drawing provides a pleasantly tactile experience; I’ve heard some versions of this game came with colored pencils. If not, it certainly benefits from buying your own set, since everyone’s sheets will be more interesting and colorful as a result.

The A/B Nature of Choices

There are games that inspire more AP (analysis paralysis) than others, and while the reasons can vary, I find it’s often because AP-inducing games produce moments where you have – say – a dozen options on a turn. In Cartographers, you could argue that the ability to place a shape anywhere on your grid produces hundreds of options, but in practice it’s rather binary. Do you want Shape A or Shape B of this terrain? Or do you want Terrain A or Terrain B of this shape?

This becomes marginally more interesting with coins. A coin-giving shape will (usually) be less good than the other, but you can scratch off a coin, which will score you one additional point in every subsequent scoring phase.

Additional nuance is added with surrounding mountains (which garner coins) and Ruins cards, which require you to place your choice of shape atop on of your grid’s ruins spaces.

From these simple A/B choices springs a ton of variance. It’s this “infinite variety from simple, branching choices” that Cartographers owes its success to.

It also creates agonizing moments in the late game. Early on, it’s often a choice between two great options, or there’s one clear option. In the last round or two, though, you’ll see people develop a growing sense of terror as they realize the corner they’ve drawn themselves into (sometimes literally), as though they started playing Tetris, got progressively more drunk, and didn’t realize they were in trouble until it was too late. In the last handful of cards, there’s rarely a great option, so it becomes a war of attrition and picking one’s poison.

From Decent to Good

I’ll be honest, roll & writes aren’t my favorite genre. They’re almost always pleasant, but rarely great. And it’s because interaction is usually relatively low or nonexistent. Unique puzzles are fun, but not anywhere near the heights that this hobby has to offer (for me, at least).

Cartographers escapes these trappings in two noticeable ways. One, there are cards in the deck that will require you to pass your sheet to your right or left, then THAT player draws the shape. This shape is one that gives you negative points unless surrounded orthogonally. It’s a hilarious moment when you pass your sheets back and literally everyone at the table groans at the absolutely miserable placement of this. It never happens often enough for it to seem like a mean game, but adds some unexpected evil joy to an otherwise solitary experience.

The other way it separates itself is by making it fun to watch the progress of your opponents’ sheets, even if there’s no strategic value to doing so. The colors, patterns, and bizarre shapes end up producing a lot of consternation and laughter as everyone hits the point where they go “Oh no…” and stare at their sheet like it contains alien calculus. And it’s palatable because that state is almost invariably reached because of decisions that player made, so they have no one to blame but themselves.

By comparison, have you ever looked over with rapt interest at your neighbor’s rows in Welcome To…? Maybe you have, but for me, it’s not nearly the same experience, nor is it with most roll & write games. I’m interested in my sheet, not yours, and you’re interested in yours, not mine. But in Cartographers, I want to see what you made.

I mentioned earlier that roll & writes are usually pleasant and rarely bad, simply due to the nature of the genre, and this more or less holds true here. However, despite it being my favorite of its type, Cartographers isn’t substantially different from others in the genre. If you don’t like roll & write/flip & fill games, this won’t buck the trend.

Colorful, varied little puzzle with just a touch of “take that” built into it, and enough interesting decisions to reward multiple plays.