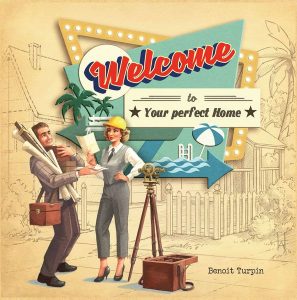 Welcome To is a roll & write – or more accurately a “flip & fill” – in which you’ll draw numbers on houses in a few rows, along with fences between many of them, to work your way along various point tracks. The game ends when one of a couple things happens, and you’ll want to reach certain configurations of houses before you hit these endgame milestones to gain bonus points.

As with any roll & write, the decisions are usually binary (in Welcome To’s case, you’ll choose one of three options each round), but this soon gives way to infinite variance. Additionally, you can’t pursue each point track, or even most of them in shorter games, so there’s a slight tension to every decision you make.

Your individual neighborhood that you’ll write on does a perfectly good job of evoking a sort of 1950’s Middle America that feels both timeless and – to my eye – a slight aesthetic parody. You also get to name your town, which is a trend various other roll & writes are adopting, but it adds a touch of personalization.

Welcome To is an evolution of the type of game that began years ago with Yahtzee, and it’s one of the more pleasing ones out there. However, it doesn’t manage to transcend any of the expectations of the genre, even while it streamlines them into something more exciting than most.

Most roll & writes are insular puzzles. A few are trying to escape these boundaries, but for the most part a die will be rolled or a card flipped, then everyone will do something on their particular board and will never have cause to care much about what’s going on next to or across from them. Interaction is low or nonexistent.

On the other hand, the benefits are clear, because the puzzle is usually interesting, and the simultaneous play ensures minimal downtime. Additionally, most can hold any number of players, so they’re a great answer to what you should play when you have, say, 10 people but don’t want to play a noisy social deduction game.

Welcome To exemplifies all of these things, and the mechanics are just clever enough, and the gameplay is breezy enough, that there isn’t really anything I can put in the negative column unless you don’t like the format altogether.

There’s a distinction I do want to draw here beyond the game itself, because it may speak to the types of players that prefer certain roll & writes.

Game A sees you roll six dice and the first player in the round take one of them, the next takes one, etc. You’re left with whatever’s left by your turn. You may have abilities to alter the numbers slightly, and likely have multiple viable strategies to take with the dice in front of you, but you’re also somewhat at the mercy of the rolls.

I’d call Game A a “random” roll & write, and Game B a “deterministic” one. Take both terms loosely, because there will be strategy and randomness in them both. But in games like Welcome To, it’s player decisions alone that create variance on individual player sheets.

I don’t think one is better than the other, but I do see a conceptual difference in them, and think it may inform how some players relate to various games within the genre.

As mentioned, interaction is low, so if you need that in your games, this will be at best a pleasant distraction. While the theme gives the mechanics something to latch onto, this is still largely a logic problem and/or math exercise. So thematic gamers will also find little to entice them.

I suspect that roll & writes will iterate to a point where they surpass Welcome To (or, more likely, some already have). Describing a game as “pleasant art and theme, with a clever puzzle, quick play time and functionally endless player count” is great, but it’s also something that can be said about an increasing number of roll & writes.

When I first played Welcome To, it felt like a novelty. That feeling, unfortunately, quickly wore off. Now, I see it for what it is: a game that works well on occasion due to the situation, like when there’s no other game that will please a group of 8-10 people, or you’re looking for something gamer-y that can be played over Zoom (this got a lot of online play during the worst of the COVID lockdowns, for example).

It’s also a game that doesn’t move my emotional meter…at all. It’s just kind of there. I can’t direct any vitriol at it; it’s perfectly acceptable. It’s just also not terribly exciting.

For a brief time, though, I could also call it my favorite game in the genre, simply because there weren’t as many options available to us. More recently, the distinction of my favorite roll & write goes to Cartographers, which I think is a touch cleverer and also adds a cursory amount of direct player interaction. The exploding number of roll & write game options means that I suspect more will supplant Welcome To… in the coming years.

If it retains its status as a modern standard-bearer for the genre, though, it will be due to the timing of its release, not because it will remain the most innovative or interesting.

However, there’s something that’s kind of pure and eminently streamlined about Welcome To, which may continue to recommend it to gamers for years to come, even if others come along that insert complicating twists that become more specific and less broadly appealing to a general audience. Its own sequel, Welcome to New Las Vegas, is one such example. It arguably loses the universality of the original, in favor of considerably higher rules fiddle. For a certain audience, this may be better. For a wide audience, though, it assuredly won’t.

There’s something to be said about universality of a game’s appeal. Welcome To has that quality. It’s why Con games exist with dozens or even hundreds of entrants (I participated in one such event, with about 50 participants; it was chaotic and amusing, like a drunk BINGO hall). Everyone can jump in quickly, enjoy, and we don’t really have to worry about the theme turning someone off or the mechanics being too obtuse for some. In a shared hobby, that can be important, even if my personal response to it is somewhat muted by contrast.