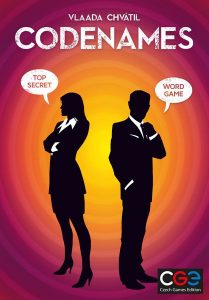 Two teams and a 5×5 tableau of cards. Each team has a clue-giver who, on their team’s turn, will say a single word and a number. Both apply to that number of cards in the tableau, and the remaining team members have to decipher which cards the clue applies to. If they’re unsure, they can pass at a certain point (without guessing up to the number of cards given in the clue) but keep that information in their back pocket for future rounds. Then, in a later round, teams have the option to guess up to one more card than the number given, to “catch up” with past clues. First team to guess all their cards (without guessing the game-ending “Assassin” card) wins.

There are ancillary rules about giving “Zero” or “Unlimited” number clues, but those are comparatively rare. The game is fairly simple (that explanation above is all that’s needed to get started, frankly).

Codenames is not attempting to wow anyone with its visuals. That said, everything is functional and legible, which is about what it needs to be to easily facilitate play. The interaction is the game’s selling point, not its cards.

The term “Party Game” has a somewhat negative connotation in hobby gaming. It refers to those mass market games that lack the punch of even well-regarded fillers. So it’s refreshing to see Codenames break that stigma as perhaps the most universal game of its type.

To be clear, someone out there doesn’t like this game. We’re talking about the rules here, though, not the exception. So if I have four (or more) people – literally any four people – and we need to play a game, this is the safest option I know of. Not Catan, not Ticket to Ride, not Munchkin, not whatever the flavor of the week is either in the hobby or in my personal gamer group. This is. It’s fun, it’s simple but requires thought, it’s fun, it’s over quickly but not so quickly that it feels like a mere time-killer, and it’s fun.

I have played this game dozens (hundreds?) of times. I always think I’ll be burnt out on it when it hits the table. But I always enjoy myself. I’m not sure 90% or more of games on the market have that kind of staying power, or the ability to apply equally to kids, families, casual gamers and hardcore gamers alike.

Deeper Than a Euro

Ok, let’s stir the pot a bit here. I’m a big proponent of the idea that in board games, when we talk about complexity, we often over-inflate the mathematical and underappreciate the interpersonal. The nuances of a good social deduction game, for example, can be as layered as the strategies in an intense Euro game, but we tend not to view them in the same way. I think this is because the social-style games can more easily be played without using brain power, but can still be enjoyed this way. And the ones who really are looking for subtle social cues, or sometimes overt ones, to decipher meaning behind them, are playing an entirely different game than the ones just joking around.

Codenames is a game where you can turn off your brain and just have a good time. It’s also a game where you can sink into layers of implied meaning and meta-analysis. This is especially true in games where everyone knows each other. What does the clue-giver know, and what do their teammates know that they know? And so on recursively. And to what extent will a clue giver listen to table talk and attempt to shift their team to the correct cards based on their previous assumptions? And why did they say “trees” instead of “forest” when forest would more readily apply to these two, but trees could also apply to another two? Maybe it was an oversight, but often it’s a subtle clue. After dozens of plays, the subtleties behind the embedded meanings within words becomes strikingly apparent during play, and it can reward introspection.

The subtitle to this section is only semi-serious clickbait, I get that heavy Euros have certain types of complexities that Codenames lacks. But I’m legitimately not joking when I say that in my most complex, intense sessions of Codenames, I’ve used as much brain power as I do in many heavy Euros. It’s applied differently, certainly, but it’s there.

That aside, this game is just fun as hell. Sometimes you just want to pick a card and see what happens.

On my favorite play of this ever, I had a series of clues where the number was “2” but where there were three cards the clue could apply to. But the third card was always a “neutral” grey card. As it happens, in each of the first three turns, my teammates guessed the grey card first, so we had nothing to show for three rounds of play. If you haven’t played, this is really, really bad. But this was part of my contingency plan, and on my fourth clue, I gave a clue that applied to two more cards and gave them “Unlimited” as the number. They grokked what I was trying to do, and we got eight cards in a single round, en route to victory.

The emotional swings of both teams as this unfolded can’t be overstated, and it’s moments like this, where something epic, unexpected, and/or hilarious comes from the eminently simple, that Codenames consistently delivers.

Codenames Undercover (the PG-13 version of the game); Codenames Pictures; Codenames Marvel; Codenames Disney; the list could go on. I don’t actually know if the Disney one exists, but the fact that I typed it with such confidence anyway is telling. Codenames is now an empire.

I’m frankly not as much a fan of these, but your mileage may vary. I say that, for example, as a huge comic book fan, but the fact that others weren’t on the same level of knowledge when I played the Marvel edition was a weird, frustrating handicap. Pictures is worth playing for the novelty of it. It feels the most different to me. But it’s not my favorite. And Undercover was frankly too many “adult” words that made clues rather homogenous. The variance and wild interpretations that are possible in the base game were largely gone.

The last thing I want to mention is that I once played this with Dixit cards, and some friends of mine played Codenames with a 5×5 tableau of board game boxes on one’s living room floor. The clues applied to various games. These are wild and great to try, and it also shows how malleable the premise of the game is.

Those who prefer their intrigue to come from mechanical systems rather than interpersonal dynamics and trying to synch intentions with others. I could also see some struggling with this if they aren’t native English speakers, since the nuance of word meanings really can make or break things. In casual conversation, odd word choices can be reconciled through context clues. Here, there is none of that.

There’s a reason this game took over the hobby when it came out, inspiring a slew of spinoffs. It’s probably been played more than any hobby game, period, in the last five years or so. If someone is new to gaming and looking for something interesting and fun, this is usually my first recommendation, and it’s a regular pull for me in all sorts of crowds. Even beyond that, it’s just a solid, fun game to have in one’s collection.