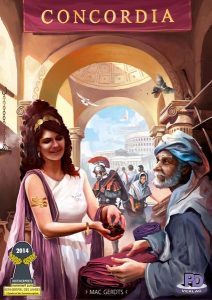 Concordia is a game with a lot of praise lavished upon it, but it’s often very nebulous praise. Words like “smooth” and “elegant” seem to follow it around, and everyone sort of knows what we mean by those words, but no one can precisely define them, or why Concordia possesses them. I’ll attempt to justify such descriptions in a bit more detail here, while also admitting that such language is ultimately somewhat personal.

Concordia is a classic trading in the Mediterranean game that seems to have become something of a meme in board gaming. “Trading in the Mediterranean” might as well be code for “dry theme that’s an excuse for some designer to show us their interlocking mechanical systems.” That’s a lot of Euros, granted, and Concordia’s not entirely immune from it here. However, it’s also a game that doesn’t get lost anywhere but where it needs to: on the game’s magnificent maps.

And what maps they are! I’m a bit of a cartophile, full disclosure, so a lot of my favorite gaming artwork is devoid of people and objects. Give me a beautiful, intricate map that’s also clear to read, and I’ll probably get lost staring into its starry blue eyes and promising it the world. Concordia scratches this itch and then some, especially given its many variant maps. 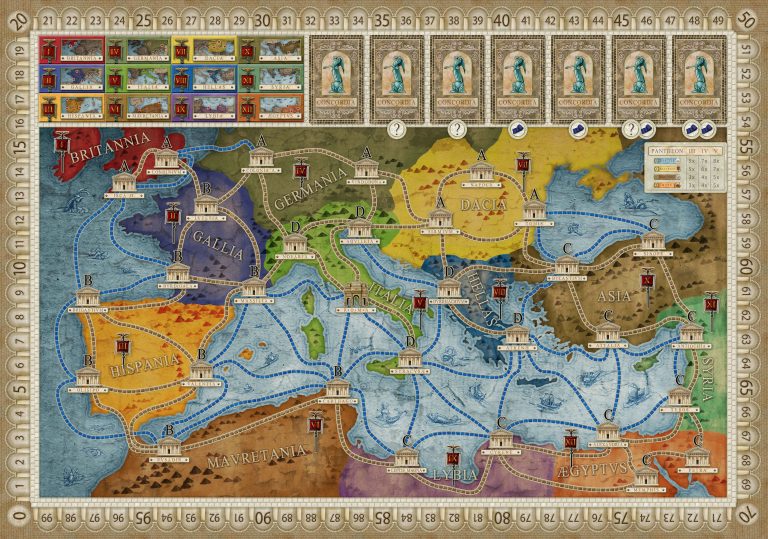 Elegance in Board Games

So why is it so often described as elegant? That frankly might be its own article, but we’ll attempt to figure it out here.

I think the key here is low rules overhead with a lot to still consider. It’s probably what we’d consider an “open framework,” to use a design term, which promotes depth and emergent gameplay, but without requiring a lot of complexity.

The game feels like it should be heavier, given the number of small subtleties you can focus on. In practice, though, you just play a card and do one of about six different actions on the card. As you buy more cards, which are mostly more powerful versions of and/or permutations of your starting hand, the game speeds up but never really changes. Most players will be able to plan out multiple turns in advance as a result, which makes play flow quickly. Sure, occasionally something will happen just before your turn that changes your plans, but I’ve had multiple rounds go by in under a minute with players who know how to play. It never feels less than breezy, and is one of the few games in my collection that usually comes in under its estimated play time (which is no small feat, mind you).

This does two things. It fulfills the “easy to learn, hard to master” requirement that makes games feel deep and elegant. The other nice thing it does is that it allows you to take your mind off of your round-to-round decisions. You have time to scan the board, watch your opponents, think about what cards they’re probably prioritizing in the card market, consider various strategies in your head, etc. Concordia isn’t a game with a lot of direct interaction. Plenty of indirect action, sure, but it’s still muted. But it seems more interactive because it allows you this freedom. Concordia gets out of its own way to let you actually enjoy the game.

Let me repeat that: it lets you enjoy yourself. Look, games as a rule are fun, but so many games these days are more preoccupied with themselves than they are with you, the player. They’ll be excited to show you how terribly clever they are, but your brain space is far too occupied with crunching through their mechanics to step back for a second, relax, and enjoy watching the game unfold. Other games are too frenetic, too socially demanding, for that same type of pause. The gaming world has room enough for all of those types, but some games would do well to remember that it’s fun to be able to step in and out of your concentration on a game, to be invested strategically but not to the point where it consumes the entire experience.

Concordia’s a game that knows this. There’s time to breath. And as a result, I enjoy watching it unfold.

All of that is well and good for a handful of plays, but you wouldn’t be amiss in thinking that perhaps it would get a bit too familiar before long. And here’s where I want to talk about Concordia’s levers…

It’s a gaming term of my own invention, but I’ve spoken in previous reviews about “levers” that some games have, wherein you can “pull” them to create a significantly different experience. Like an On/Off switch. All games have a couple levers, in the form of player count and the actual players you sit down with, and the different personalities they bring. This variance is a given, though. Concordia’s levers are, much like the game itself, subtle but powerful.

The first is setup, in which goods will be randomly distributed, which creates different board states in terms of priorities. This helps, but isn’t enough in and of itself to create a replayable experience.

The second is the board itself. Concordia comes with a couple maps to play on, and somewhat famously has about 10 official variant maps (probably more by the time this review is published). These all provide notably different game experiences.

And a map that is designed for 2-3 players might be best suited for those play counts, but will also be a wildly different ride at, say, five players. Others will be heavy on land or sea travel, or will shift the balance of power toward a certain scoring type depending on player count.

I don’t think I can understate how much the game feels different simply due to shifting maps and player counts.

A couple maps have bolted-on rules to spruce things up. While I don’t think the game needs this necessarily, my favorite map (Egyptus) has a bit of a gimmick, with additional resources traveling downriver and waiting for players to race to claim them first.

I have yet to tire of how much these changes really do create a different game every time.

Lastly, the game has an excellent expansion, Concordia: Salsa, which brings with it two new maps, and the titular Salsa, which is an expensive, wild card resource. More subtle possibilities open with this. Salsa also comes with Forum cards, which are another way to utilize your resources, but to me they take the focus away from action on the board. I don’t like them. Fortunately, it’s not a module that is necessary to play with the salsa (salt) resource or the Salsa maps.

Concordia has another iteration, Concordia: Venus, that brings with it a team-based variant for four or six players. This variant is significantly clunkier, and it bloats both the play time and mechanical overhead without delivering a different experience. It’s still good, mind you, and fine for a change of pace, but the bar for quality set by the base game is high enough that this seems awkward by comparison.

[Side Note: You can play Venus 6P without teams. I did a writeup on recommended adjustments for it here.]

I mentioned the levers, but this is still a game I can’t binge. My initial plays of Concordia were spectacular, and while my enjoyment of a game usually peaks as I explore its depths further and further, I found myself slowly mellowing on my initial euphoria over Concordia as I hit double-digit plays and beyond.

My unabashed appreciation is still very strong, but despite the myriad maps and other ways to change up the experience, I do think this is more for an occasional pull, rather than, say, a weekly inclusion in the bag I bring to my game club.

But it’s also a top 25 game for me. Such favorites don’t need to be ones I’m always itching to play; in Concordia’s case, it’s more a delight to rediscover a handful of times per year.

It’s also not low interaction, per se, since everything and everyone is in the same shared space, and by game’s end it will feel very cramped. The interaction is all indirect, though. This is neither good nor bad, but will please some gamers and irk others.

If those are the chief criticisms I can level against it, though, the game is doing quite well for itself.

And of course, it is. It’s been in the Board Game Geek top 100 for years, and remains a well-regarded, oft-recommended title. While I don’t always think the BGG list is a great metric for quality, in this case, I sincerely believe they got it right.