Balance in Board Games: A Cosmic Encounter Review 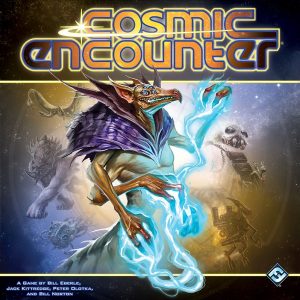 What can I say about Cosmic Encounter that hasn’t been said already? Not much, likely. I do have a point in highlighting this game, though, and it has to do with how we think about balance in board games. This will weave in and out of a handful of games, so it’s not entirely a review, but that seemed the best descriptor for this. Anyway…

In brief, Cosmic Encounter is a great game, and a shockingly unique one, given how long it’s been around. It’s a game that trades tactical strategy for interpersonal strategy. Sure, you’ll be able to play cards to maximize your chances and hopefully deploy your species ability at an opportune moment or two, but the core of the game is in haggling with others as you try to make sure that you’re getting a small slice of as many pies as possible, then sneaking onto that last planet before everyone else (or alongside others in a shared victory).

Any game where one player could win, or all but one could win, is probably going to be pretty funny. And so it is. And the humor is organic, not forced, which is how the funniest games always are. The gameplay facilitates improbable alliances, crushing failures, and sneaky, unexpected moments of glee and tragedy.

The various species powers are a highlight for me. They’re wacky, game-breaking abilities that are usually hyper-specific. In some games, you’ll never use yours. Other times, it will be the reason you win convincingly. They’re great.

They’re also referred to as imbalanced a lot, though usually not in a negative way. So why is that?

How We Quantify Balance in Board Games

We all understand balance on a cursory level. You’ll have various options on your turn in a game, and can often directly see how many victory points (or other reward) they’ll net you. If one is consistently the “best” option, our brows begin to furrow and we wonder about the balance.

Is balance, then, balancing those options? Not quite.

So now we step back one level and look at an entire game. Individually, one choice may be better for you on a turn than another, but there are rough paths or strategies in many games that can be pursued. In Tokaido, am I doing a Money + Souvenir strategy? A panorama strategy? Something else, or a hybrid strategy? I can see the literal paths in front me, and over a large enough sample size, patterns begin to form. And it’s my hope – and many gamers’ expectation – that each distinct path is a viable way to win.

Is balance, then, balancing these “path” options? In some cases, yes, it stops there. But I want to talk about a third type of balance, as well as a subset of that type.

I heard at some point that Cosmic Encounter’s designer was on a podcast and said something akin to “balance is for wieners.” I have no idea if this is true, or simply apocryphal, but it certainly rings true to anyone who’s played Cosmic, doesn’t it? We can easily imagine its creator saying this.

I’m here to argue that it does actually have balance, of two types, but it’s a “balance” that’s wholly congruent with the alleged quote above.

The first is human balance, a phrase of my own making (though I’m far from the first to talk about this type of balancing). Cosmic is a game that considers the players themselves to be a large variable in the equation of the game’s balance. It gives them the negotiation tools to be able to course-correct when, say, one player’s special ability is turning out to be a massive advantage in this session.

In some games, I’m impotent to do anything about my opponent’s success; I simply have to out-succeed them in my own strategies. Plenty of games follow this model. Both are valid design models, but must be approached differently.

Cosmic doesn’t need to have even approximate mathematical balance because of this fact. But I think it has great human balance, or it wouldn’t still be so popular.

The other type of balance is related, and I have a story that ties into it.

I’m an amateur game designer, and have made a couple complete games that I play with friends. One owes its existence to several inspirations, and one of the inspirations is Cosmic Encounter. As I tweaked the rules, I knew I had a game with the “human balance” I mentioned earlier. So not all options had to be perfectly equal.

There can (and should) be imbalances in options, but the source of the imbalance should not always be the same between games.

I mentioned earlier that in some games of Cosmic, your species ability is worthless. Other times, it’s the most powerful force in the game. That’s usually because these powers are powerful but situational, so there’s no guarantee they’ll trigger in useful ways in each game. Anyone who’s played the game enough will have their pet powers that they prefer or find uses for more often, but is any ability even close to a guaranteed win? Will any ability be really, really useful in every game? There are enough expansions and races that there may be a couple exceptions to this, but by and large, the answer is “No.”

So, the imbalances are always there, but the source of the imbalance in sessions varies. Just as it should be. And in that variance, I see balance.

Inis is another game I adore, and its Epic Tale Cards are similarly game-breaking but situational special abilities. They feel much like Cosmic’s races. And it works, because there isn’t a “best” card, but rather many best ones at different moments. And in both Inis and Cosmic, you can subtly push the game in a direction that will create the right moments for your ability to shine, so it adds a layer of strategy, even amongst the seeming chaos.

Is this groundbreaking insight? No. I’m not the first to think critically about games in this way. But I do see terms being thrown around in these areas that, to my eye, are occasionally misapplied. Cosmic provides an excellent case study in isolating each.

So when I see that something is “broken,” usually as declared by some detractor on a discussion forum, I often wonder if it’s hyperbole. I also wonder what type of game the supposedly broken element exists within.

When I play El Grande, for another example, I want there to be rounds where one or two cards stare at everyone like expectant lovers, and we all end up tripping over ourselves trying to get them, while the other players flip us the middle finger. I don’t want cards that are more or less the same, with only marginal differences between them. I want broken stuff, but only in the right type of games. El Grande is another with human balance, so it can weather such spikes where other games might not.

I mentioned Tokaido. I’ve researched that game a bunch, and studied meta-data from thousands of sessions of both it and its “Crossroads” expansion. While it won’t be an issue for most groups, imo it has a legitimate balance issue at higher levels of play. There are objectively better starting characters, and while game flow is situational, a couple point tracks are consistently better than others.

This is a problem in ways that Inis, El Grande and Cosmic aren’t, because there’s only so much that anyone else can do about it. If I draw the best characters to choose from at the start and you draw the worst, you’ll be at a significant disadvantage in every single game we play. This is in stark contrast to Cosmic, where some species powers are undoubtedly more useful than others, but a claim like “this is the best every time” is easily dismissed.

I don’t mean to pick on Tokaido. I quite enjoy it, actually. But it’s a useful comparison.

I want my games of Cosmic Encounter to have an annoyingly good alien species ability, whether or not it’s me who has it. I want that villain at the table, and I want to fight to overcome it. I and others at the table have the tools to do so, so the perceived imbalance is never onerous. But if I draft Satsuki in Tokaido (one of the worst character abilities), you can bet I’ll be grumbling liberally, because there’s not much I can do to mitigate my crap fortune. If I do, and an experienced player has, say, Kinko (one of the best), I’d optimistically put my chance of winning at 10-15% even in a 2P game, and even lower with more experienced players around the table.

Superficially, pointing to imbalances in starting abilities makes Tokaido and Cosmic seem similar. But one imbalance is bad. The other is not only fine, but actually enhances the game.

Many powers can be utterly overpowered in Cosmic…but only in the right situation. And if you’re too strong, you’ll probably invoke the wrath of the entire table, and good luck with that. Cosmic Encounter is broken. And it’s much better off for it.