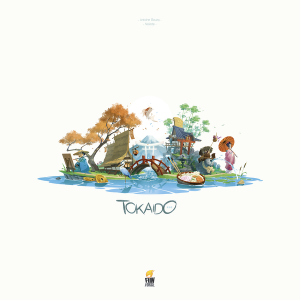 In what may be one of the more pastoral, delightful themes in all of board gaming, you’re on a journey in feudal Japan and want to have the best experience.

There are several types of location you can stop at, and each type yields a particular resource, often rewarding multiple trips to the same type. What this translates into a set collection game where you’ll never be able to complete everything, so you have to pick and choose which point tracks to prioritize, and when.

I’ve played Tokaido more than any other modern board game, largely thanks to online plays, but also from numerous in-person plays. I have some thoughts on it…

A simple moving mechanic quickly gives way to a lot of tension about when to leapfrog open spaces to get what you REALLY need, or to prevent your opponents from getting the same. A mix of randomness in several of the card types means that you can always play the odds but can never know for certain if some decision will pay off like you hope. Variable costs for things like food and souvenirs also creates stress around your money situation, which will usually be precariously low at one or more points in the game. This creates opportunity to cash-starve opponents by visiting money-granting location types, or delay visiting certain locations types, knowing that they’ll have to skip over the more expensive ones later on.

As a result, it’s a game that will favor experienced players, but not to the extent that new players can’t win. With the addition of the Crossroads expansion, that statement stops being true, as an experienced player needs a lot more bad luck to stumble enough to lose to a new player. The Matsuri expansion reinjects some randomness, but likely not enough to overcome the powerful synergies in Crossroads that favor experience.

Tokaido hides more depth than I believe it’s given credit for. After several plays on Board Game Arena (BGA) I started to see this, and began writing about the game’s strategy to work through my observations and calculations. You can find the first of my many different strategy threads here, and it links to all the others I’ve done.

Long story short, what you do, when, and why is a tougher nut to crack than many realize. And the shifting math of the game means that there are many points at which your decision can swing things wildly in your favor. It’s a short game – playing in about 45 minutes even at max players – so you might only have 6-7 of these tough “decision points.” But when each player has that many, it can be an exciting time to watch it unfold.

Everything from the minimalist aesthetic to the components and card art works wonderfully with the theme. Tiny score tokens are perhaps the lone knock I’d have. But even if the gameplay is a little bit more cutthroat than the theme lets on, it’s still hard not to feel relaxed while playing, as you meet visitors, commission paintings and bathe with monkeys in hot springs.

It really does feel like a journey, and because the last cards in the sets you’re building will come later in the game, there’s a satisfying arc to your journey that leaves most of the most interesting moments for last. Vying for bonus cards, the highest temple donation, or the final portion of a painting in the final leg of the journey can be great fun, especially since you’ll inevitably have to sacrifice other tantalizing options to do any of them.

Crossroads adds strategy and depth, Matsuri adds randomness. In the context of the entire game, Matsuri is fluff to me. I have no desire to own it, having played with it a couple times. Crossroads, on the other hand, is why I can recommend this to gamers who might otherwise become bored with the base game eventually. It doubles the options by giving you a second options for each type of stop, but more than doubles the depth because of the ways those options can compliment one another. The addition of new starting characters in both adds another fun mini-game at the beginning, as you decide between the two options you’re dealt.

After all that, it may come as a surprise that I have a few negative things to say before concluding this review.

The base game does not have enough going on to reward numerous plays. It’s lovely, but is ultimately something many will graduate from unless their wheelhouse is with lighter family-style games. Stated differently, it can get boring. The Crossroads expansion saved it from this fate for me, but the base game alone wouldn’t have cut it after a while.

Crossroads makes it more of a gamer’s game, but as my strategy articles allude to, there are definitely imbalances in the starting character options and in-game scoring tracks. There are two issues here: if everyone knows these imbalances, they work themselves out. So the game isn’t “broken” in any sense, but requires players of equal skill to be competitive. But if there’s a discrepancy in player experience, a newer player is basically never going to win, since they won’t know that some options in the game are simply slightly worse on average.

With more hardcore games in the hobby, this is somewhat expected, but with a game like Tokaido with an objectively casual feel and theme, the competitive discrepancy seems off kilter with the game’s tone.

Additionally, even if players are of equal skill, the strategic discrepancy between starting characters can be profound. You’re supposed to draw two randomly, then choose from them. Usually you’ll have a decent option, but if you don’t, you may have lost before the first turn is taken.

Second, something seems wrong to me about a set collection game where, in order to win, you absolutely need to do one particular thing (get one or more Calligraphy cards in Crossroads) and should usually be prioritizing a particular point track (souvenirs, which tend to have the best synergies with particular character abilities and highest potential for points).

Granted, this isn’t always true in the latter case (souvenirs), but I’ve never seen someone win without a Calligraphy in a reasonably competitive game, and all of the copious data I collected on the game supports this.

Matsuri just adds more stuff; I can’t honestly say that anything from it will add to the fun for a specific player type. Maybe I’m missing something with Matsuri. I have less experience with it, though, so take my comments on it with additional grains of salt.

I enjoy playing online on Board Game Arena (BGA), usually with Crossroads and against other experienced players. In that environment, it becomes a tense game where we try to block each other from the best point options, guess at each other’s Calligraphy cards, and angle our way to more of the goodness before others beat us to it. It’s a ton of tense fun packed into a quick game. However, I’m not sure I want to pull this game with my IRL friends anymore. Every time I have, it’s either not as satisfying as others we might play (base game only) or there’s a large strategic gap due to player experience (Crossroads).

Now, aren’t there lots of games where the more experienced player will win for a while, while other players catch up in knowledge? Sure. But they’re usually aren’t packaged in a way that seems explicitly aimed at casual or gateway gamers, and there are usually numerous equally viable paths to victory, and variable player powers that offer roughly equal chances to win if played intelligently. In my dozens of plays and analysis of those games, I’ve found this not to be the case in Tokaido. There are – quite frequently – better or even best options mathematically that rarely or ever deviate from game-to-game.

This is only an issue when you’ve played as much as I have. Most groups will never experience it. But it’s a consideration.

For most games, I don’t really enjoy online plays much compared to F2F plays. Tokaido is a notable exception, and I think it’s because the issues I mention above create a situation where online play is the best way to enjoy the best this game has to offer. Which is rare for me, but interesting to note.

So does that mean this is a worse game than I let on by praising it earlier? Not necessarily. It just means that you’re going to have to be discerning about what type of gamer you are, what types of gamers you play with, and which experience will be for you (or which won’t be for you).

Those who dislike the cutesy theme may raise their eyebrows (I think it’s great), and the fact that the base game is pretty lightweight means it won’t win those gamers over quickly.

So full disclosure, I liked Tokaido more when I initially drafted this review than when I wrote this section and it was published. And it’s because my personal tastes have changed. But I still think it’s an excellent game in many respects, because I recognize that the experience and mentality of 2014 Mark (when I first played Tokaido) is different than 2021 Mark, and will reflect a portion of the board gaming audience.

For many, Tokaido will be a lovely, quick, light game that can be taught to and enjoyed by a variety of gamers (or non-gamers). As with many lighter games, it risks becoming repetitive with numerous plays. However, if it’s only an occasional pull, that will not be an issue.

The Crossroads expansion adds a pleasant amount of depth and additional choice to the game, which can be necessary after numerous plays, but you may want to ensure that you have a game group that can all learn the game together and progress strategically at the same rate. Otherwise, the most experienced player at the table will have to pull their punches to create any drama around the winner.

With that caveat, I can absolutely recommend Tokaido and Crossroads as delightful experiences, and Matsuri only for those who want to see all character options and mechanics.