Barovia Goes to the Birds: Curse of Strahd Session #7

Previously, the group had entered the town of Vallaki and had several paths to explore.

No Bones About It

Deciding that the first priority is to get the sacred bones back to St. Andral’s in order to remake it as a safe haven from Strahd, we track down the little shit grave digger kid who was snarky to us before. Some more failed persuasion and intimidation rolls are followed by Gwaihir breaking down and casting Suggestion on him. He gives up the local coffin maker – who himself was hired by a Vassili von Holts – and says the bones are with the coffin maker.

On our way there, we see stocks in the town square, with people in horse masks who are in the stocks for “not being happy.” The guards aren’t much help, and we let the matter go for now, realizing that we’d have to deal with the leadership of the town to actually get this to change.

We get to the coffin shop. More failed checks to get in by persuading, including an attempt to break into the second floor of the coffin maker’s shop. A second Suggestion spell finally gets us some info from the coffin maker. He tells us the bones are upstairs, but that there are six vampires in coffins up there. “They’re sleepier during the day” he says, and we resolve to come back the next morning as it’s already pretty late. We head to the inn.

The inn is sparsely populated, but we get to know the bartender while purchasing a room, food, and wine. His wine stores are running dry, and the shipment from “The Wizard of Wines” winery is late. We mention that we may look into it, but after other business.

Ahk-wa chats up a couple ladies who don’t offer much info.

Meanwhile, Landroval and Aial meet a brightly-clothed elf. He’s a carnival master. Landroval immediately leaves, and Aial begins arguing with him. This, of course, refers back to our backstory, as we were enslaved in a carnival for much of our lives. Rictavio is his name, and he doesn’t have a full carnival yet, but asks us to join. Obviously, we refuse. Clearly, this is a person who must be stopped before he can enslave animals. Aial informs the others after the conversation, and we resolve to kill him. We watch him leave the tavern. Aial follows him into a stable, considers turning into a lion and eating him, but instead reports back.

A couple of “bros” enter the tavern, already drunk. We overhear a conversation about how they want to set fire to Rictavio’s cart as a prank. Excellent news! We have some new friends, and make plans to sabotage Rictavio’s cart at the upcoming festival in a couple day’s time. Their names are Nicolai and Karl. We also let slip that we’re going to kill Rictavio, which gives them pause. But we recover, saying “killing him” is only metaphorical. The bros also somehow end up telling us about one of their mothers, the “Lady Watcher” who has a book club. Gwaihir is very interested. “Tell them the birds are interested in the book club,” says Ahk-wa, having no thought that this phrase might inspire a lot of confusion. We make tentative plans to meet this Lady Watcher after we’ve burned Rictavio’s cart.

I Thought Ravens Liked Us

We head to bed, with Landroval sticking around in the bar to get drunk with Nicolai and Karl. But Aial can’t sleep right away, and talks Ahk-wa into an excursion to the stable to investigate this nefarious Rictavio. Using the Speak With Animals spell, Ahk-wa acts as lookout while Aial talks up a pleasant but unhelpful horse and some ravens in the barn’s loft. Inspecting the loft further, we find a chest and secret door. The raven freak the hell out, and we learn that the chest belongs to their master, the bartender who owns the bar. We decide not to take the chest, and leave it. Re-entering the main bar, the bartender confronts us. One of the ravens snitched. We make up some awful story about being birds and looking for good places to roost. The roll succeeds, for perhaps the first (and only) time this session. Having dodged that bullet, we head to bed, for good this time. Ahk-wa sets a Snare trap at the door that will never see use.

The Vampire Diaries…or Rather, Novels

It’s at this point that we hear screaming. And it’s moments later that – with the help of a gleeful DM – we recall that we left Ireena in the church instead of bringing her with us. She’s the entire reason we want the bones. A sinking feeling develops in the players. The DM smiles.

We approach the church. Vampires scrambling up the sides and hunting down villagers. Aial runs inside. The priest is dead. Ireena is nowhere to be found. Villagers – who flock to the church seeking shelter each night – are dying at an alarming rate. We engage the vampires.

What followed was the longest battle I’ve ever been a part of in D&D, largely thanks to our ineffectual rolls and suspect tactics. A Moonbeam spell from Aial does more damage than like any three of us combined. Ahk-wa manages to start doing damage by about the fourth round of combat. And none of them are dying. We eventually figure out they’re healing, and we have not been focus-firing. Fuck. A couple times we get too close to the church walls or land, and get torn into by the vampires. They hit hard. Bad idea. Good thing we can fly, or this was easily a TPK. The spellcasters run out of all spells. Something like 25 villagers die as we swat a couple vampires back and forth into the Moonbeam, our only useful contributor.

Then…Rictavio shows up! And gets his ass handed to him in a round or two, albeit after a couple powerful, impressive spells. Still somewhat hateful of him, we don’t offer much help. He falls unconscious. Saves us the trouble of killing him, we think. STILL no dead vampires.

Perhaps through something in the book, or perhaps through a merciful DM who realized this might be an eternal stalemate if we just hung out in the air (they couldn’t fly), the city guard shows up. Many of them die as well. Rictavio makes a Nat20 death save, so he comes back up. Aial still wants him dead, despite this display. Landroval is impressed with his fighting skill and bravery. Ahk-wa is undecided. Meanwhile, the fight finally turns. The vampires die. We eye Rictavio cautiously, since he’s clearly the true villain here.

Ireena seems lost. We curse ourselves, and try to determine our next steps before getting the night’s rest that we were headed to at the end of LAST session.

I think this was my first true “slog” in a D&D fight. And it was equal parts frustrating and hilarious. At one point, I frightened an enemy (as Gwaihir) and was excited, only to be chastised by Aial, who then couldn’t yank him back into the Moonbeam with a spell. We were stepping on each other toes, not fighting well OR making rolls. Or thinking of alternate ways of dealing with the vampires (entering the church with the villagers, for instance, since we know they can’t enter without an invite). A deadly combo of bad luck and stupidity…but flight saved us. This time.

We recounted every wrong move we made in this session, which was a lot of them. We probably could have just yanked the bones at the coffin shop and been done, but forgetting Ireena was the most egregious error, and it’s one we’ll probably be paying for long after this session. We also laughed ruefully at the fact that we literally accomplished nothing, and only got set back a step or two this session, along with getting another plot hook or two. And making enemies with a character who’s clearly meant to be an ally. Whatever. We can’t stand the circus, so the super-powerful NPC can rot. We may not kill him, but I’d be surprised if we ally with him.

Gwaihir is coming back to a mess next week. Should be interesting. Anyway, here’s a pic from the fight. That’s me raining death (or rather, misses) from about 70 ft. up: 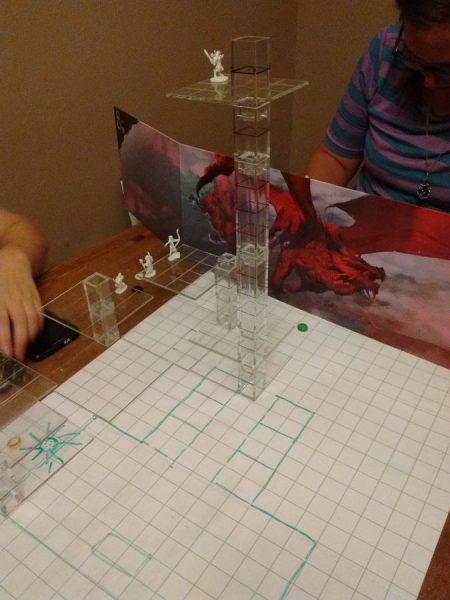 Up Next: Resting (we hope), probably killing the coffin maker, possibly killing the most powerful NPC we’ve met, and picking up the pieces of this dreadfully navigated session.