The Engagement of Adelaide Endicott Review 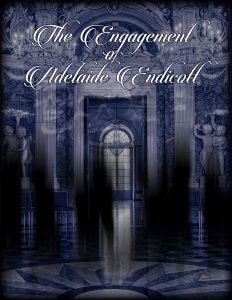 This was a fun read, but I need to say right off the top: There’s a different scale for these free, community-made things. I’m going to say a lot of nice things here, and they’re all true. But because of how it came together, it means that it will be missing elements that I would expect of a commercial product. The intent here is wholly different. So I’ll point out things here or there that would improve this to the level of a published commercial work, but it’s with the perspective of how this came together.

That aside, let’s jump in.

The Premise
You’ve been invited to celebrate the nuptials of the daughter of a fabulously wealthy couple, in a hopelessly large mansion. It’s a great excuse to build out said mansion, and for players to explore it. This premise gives you a reason to explore, but it’s not strictly adhered to. I won’t belabor this, since it’s minor and also explainable by a nimble GM, but this is the type of thing I mentioned, which you’ll have to overlook for the sake of enjoying the funhouse. Everything is in a more-or-less gothic Victorian idiom.

Great Old Ones & Tone
There’s a cult plot thread involving a Great Old One that might actually be a better hook than the engagement party, and pleasantly, the adventure includes a few variants on the hook for GMs to choose from (including, hilariously, the “Scooby Doo” variant of a regular dude in a mask). YMMV. In general, the party exists to get the party to the mansion, but a GM will have to build out the celebration itself in much of the mansion if they’re running with that premise. If it were me, I’d probably use the party – or whatever else – as pretense for the PCs to investigate this Lovecraftian thread.

I also mention the Great Old One hook because there’s a lot of consistency between rooms that revolve around this particular thread. It might not all be connected thematically, but it’s commendably close in many areas (particularly the basement), to the point where you could absolutely run this as a cultic raid instead of a wedding party.

This is also a Rated-R adventure. Gothic horror is the right descriptor here, and there are a few explicitly sexual descriptions, as well as other truly horrific areas in terms of imagery or NPC motivations (special “thanks” to Clark Timmins for searing a few images into my brain permanently from the Cesspit room 😉 ). I can appreciate these elements, even as they make me squirm, but it’s a reminder that this adventure is for adults and won’t be for every temperament.

A Mansion of Ideas
Much like the previous RPGGeek community project – The Breached Fortress of Anoros – I tend to view this not necessarily as a complete adventure that’s to be used as-is. That isn’t what this is, at least to me. Instead, I see it as a series of rooms loosely connected by setting, theme and tone, to be mined for individual or grouped ideas. I think reading it like this produces the best insights and takeaways. Because I don’t know that I’ll ever need a full Victorian-style mansion of this size for a game. But I might love adapting the room with the “hunger spirit” whose hunger manifests as an insatiable desire to play games, or a room that is designed to look exactly like an African plain and has a literal lioness stalking through it. This is fun stuff.

The fun is occasionally dark. The tone, as mentioned, frequently strays into the overtly creepy. The inhabitants of the Nursery, for example, could likely populate an entire adventure unto themselves. Aliens, mechanoids and ghosts and all other manner of odd children. But you will be wide-eyed in nervous squeamishness reading through the entirety of their backstories. It’s not “fun” in a conventional sense, but may inspire a GM looking for something suitably macabre to insert into their setting. Also, not everything is so overt; there’s plenty of subtle spookiness as well. But both exists in spades.

The mansion’s size – there are a lot of rooms – also means there’s likely more to recommend it in this department in Anoros, simply because of the larger volume of ideas packed into this one.

Descriptions
There are some lovely gothic-style descriptions here. Naturally, the tone trends toward horror, but with plenty of frivolity. My favorite line: “The ghosts of cows who died here in prehistoric times can sometimes be heard, mooing mournfully for their lost calves.”

If you’re running the whole thing, you will likely have to crop some descriptions at times; but all authors seem invested in the theme, so nothing feels out of place, even if there’s some overlap in specific types of description you’ll encounter.

Miscelany
There are some fun tables that include such things as sensory triggers PCs can experience. This is cool. I’ve never rolled randomly for senses, and I think I might like to. The smell of burning meat in the spooky cave? Makes sense. But how about in the library? The hilarity of things like that unlikely pairing are what I live for as a GM. I’m not sure how I’d justify the meat smell, but it would produce a fun moment regardless.

The cover is cool. I believe Patrick Zoch made it, as he has for a handful of these.

The map is also spectacular, matching the Victorian style of the adventure magnificently.

If this were being released to a wider audience, it would need a content warning, some formatting and editing work, but functions amenably as a fun collaborative project with a hodge-podge of cool and creepy ideas.