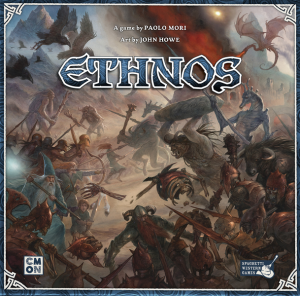 Ethnos burst onto the scene with some fanfare, in large part due to some glowing reviews from prominent sources. In the years since, its popularity seems to have waned, as is the fate of so many games in our saturated market.

Still, Ethnos remains well-regarded, and worth revisiting for fans of set collection and area control.

To be clear, Ethnos is a set collection game that masquerades as area control. Which isn’t to say there aren’t interesting, antagonistic decisions to be made at times, but this is about as benign as you’ll see a game be that can still technically call itself an area control game.

In each of its three rounds, you’ll be drafting cards, either face-up public cards, or blindly from the draw deck. You play sets of a couple different varieties, gin rummy style, to place your tokens in one of the game’s six areas. But the rub is that when you play a set, all of your other cards must be discarded to the face-up draw area.

The other twist is that each set has a “lead,” represented by one of the game’s many fantasy races. Each race has a power, and the powers let you manipulate events. One race, for example, allows you to immediately play a second set, circumventing the restriction above.

Within that framework, you vie for control over the six areas, as well as ancillary benefits tied to various race powers.

Style and Substance in Ethnos

One thing Ethnos is not, is flashy. The board is workmanlike in every sense of the word, and includes no frills.

I’m someone who loves a good map, and prefers good board/map art to many fanciful components or stylized card art. So it’s saying something that Ethnos’s board bores me.

The card art is marginally better, though the board doesn’t set a high bar to clear. Still, this is a game whose merits lie in its gameplay.

We’re in an age where games usually need to differentiate themselves in multiple arenas to stand point. There are exceptions with this in regard to presentation. The best example I can think of is Tigris & Euphrates, a game with almost laughably minimal art, but where the gameplay is so unique, focused and compelling that I find myself not caring.

Does Ethnos enter the same territory? Let’s find out. 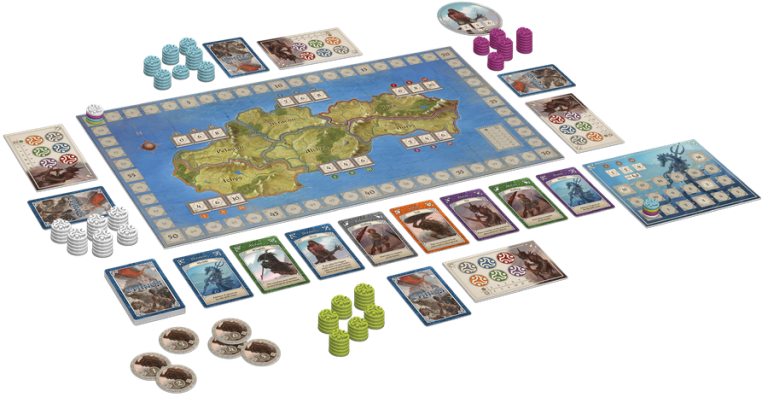 I think one of the best things a game can be is tense throughout. If your decisions, and the decisions of others, all carry weight for your plans, this is excellent news.

So it’s probably the highest compliment I’ll give the game in this review to say that Ethnos is uniformly tense. There will be a card that you really want, available in the public draw options. But there are two players yet to play before your next turn. Will the card be available on your turn?! This will happen approximately any time there are more than a couple cards available to draft.

The same goes for your own draws. The more you pull into your hand, the better chance you have of a very impactful set, which will net a lot of points. The downside is that, the more cards you have, the more likely you’ll be to have to discard many of them when you play your next set.

This balance, and tension, is almost the entirety of the game’s appeal in my mind.

It would be tempting to say that the race powers – which are variable based on game setup – are one of the game’s draws. And they certainly are. Mixing and matching to create new variations on the same gameplay is a boon for nearly any game. So it is with Ethnos.

However, the possibilities to chain them together remain somewhat limited. MTG this is not. It adds to the complexity of decisions in minor ways, but you’ll rarely be looking at 2-3 equally good options in your hand, or multiple different ways they could be combined.

In that way, it’s almost a push your luck game as much as a hand management one. “I could get a disk down for 6 points, or draw for the possibility of 10, but I’d need a Centaur, Dwarf or a Blue-colored card for the draw to be worth it. Do I do it…?” Those are the questions you’ll face more often, rather than how to combine the 6 cards in your hand the best way. They may offer some possibilities, but often a “best” option will be evident.

The often blind card draws also inject more randomness than some will appreciate. I found that the central strategic tension of pressing your luck was always present even through the blind draws, but there’s certainly awesome and useless cards that will play a role in the outcome.

So far I’d call this a fine enough game, but nothing hugely special. However, I think there’s one more positive trait that will justify its inclusion in many collections:

It holds six. And it plays breezily even at its maximum player count.

The game time is listed at 45-60 minutes and…that’s about right, which is a rarity in the hobby, which is filled with false promises of hour-long games that really take 2+ at anything close to max players. If you’re teaching, at max players, and accounting for setup/teardown, you may slip over an hour, but not by much.

So there’s an informal calculation in my head for games that, roughly, is “Satisfaction / Time.” That is, satisfaction divided by time.

It’s not an exact science. I can’t say that Ethnos is “two units” of satisfaction or whatever. But what I can say is that, relative to its play time, I always feel like it’s been worthwhile. At two hours, it would undoubtedly overstay its welcome and become repetitive. At 30 minutes, it wouldn’t have enough narrative heft. But like Goldilocks’s third try, it manages to be “just right.”

So it works by staying bounded. In a too-often “more is more” hobby, a game with merely ok art that plays in an hour and has a minimal rule set to learn is something of an outlier. But it’s not an unwelcome one. To bring back the earlier comparison, it’s not as good as Tigris & Euphrates, but it does indeed borrow a few conceptual nuggets from that game in how it focuses on the substance of its gameplay over theme or mechanical complexity.

So is all of that enough to warrant a purchase? I don’t know. There are so many great games out there, that even one that is a solid entry into an underserved niche might only be worth passing consideration. I think it’s a strong recommendation for those who struggle for quality options at 6P. For me, Ethnos will go into the “happy to play, wouldn’t own” category. It satisfies, but doesn’t necessarily excite me. That’s not a terrible place to be, though, and I think it can fill a niche and scratch an itch for some gamers that may be currently unfulfilled.