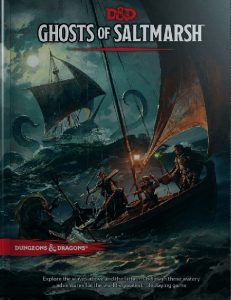 Ghosts of Saltmarsh – The Premise

The region of Saltmarsh is a classic D&D setting. Historically set in the Greyhawk setting, here it’s reimagined as setting-neutral, and is a self-contained area with a lot of intrigue.

The book is primarily for Dungeon Masters and includes a brief setting guide, several adventures that are loosely linked to one another, and tools for fleshing out a nautical campaign, including stats and rules for ship-to-ship combat, new sea creatures, and various location and encounter charts.

Let me get this out of the way: Ghosts of Saltmarsh is my favorite 5th Edition Dungeons & Dragons adventure.

That’s not to say it’s the best adventure in 5e, per se. But rather, it’s going to be great for certain Dungeon Masters who want to run a nautical campaign.

I want to unpack that statement, but let’s first dive into the book and describe its sections.

Saltmarsh is set up as a bit of a sandbox environment, with a handful of towns, factions, and surrounding adventure locales.

The chapter that details the region doesn’t go into a lot of detail on many of these elements, though. It’s enough to act as a primer for an adventure in the area, but lacks a lot of details on various things that it mentions.

For example, The Drowned Forest and Dreadwood are potentially magnificent locations for higher-level adventures, with creatures respectively from the Nine Hells and Abyss occupying them. I could imagine this leading directly into The Blood War in offshoot adventures. But the details are so sparse that it basically acts as window dressing, and these areas never come up in the book’s subsequent adventure. It’s a missed opportunity.

So it’s inspiration fodder, but not a full setting guide. For DMs looking to build their own campaign and who just need a small push, this is great. But for those who want something more ready to run out of the box, it will be a lot of work.

There are also new background options for players. This is really the only player-specific content in the book, but it can be nice for a DM to share with their group to give them more options.

This is the meat of the book, and is the reason many will purchase and use it. Contained in these chapters are several classic D&D adventures that have been updated for 5th edition.

Most will take typical groups more than a single session, though a couple are clearly intended as one-shots.

The other notable feature is that the adventures aren’t set up as a campaign. But neither are they wholly removed from one another.

One string of three adventures (Chapters 2, 3, and 6) is explicitly linked, and you can play them linearly, one after another. However, even here, the implication is that you don’t need to go directly into the next adventure. Several sessions or 1-2 levels of play might occur between them.

The others have tangential connections to one another, and the book suggests a large-scale framework from which you can build a campaign, but they do not need to be linked in any particular way other than the shared setting and their proximity to the sea.

I have two favorites: Isle of the Abbey, wherein the party has to navigate a cursed field filled with skeletons (which will likely form a Skeletal Juggernaut, one of the book’s new monsters), followed by a clever, trap-filled dungeon.

The other is called Tamaurat’s Fate, and it is more or less a “tower defense” module in which the role of the traditional adventuring party is inverted. Here, they’re holed up in a creaky, old mansion, and having to defend it (and their comparatively helpless NPC allies) from an invasion of undead creatures.

Saltmarsh straddles the line between most 5e adventure books, which have a single, coherent adventure plot, and a book like Tales From the Yawning Portal, which is largely just an excuse to update a bunch of classic adventures that have zero ties to one another.

Everything in Saltmarsh shares a tone and setting, but you can skip any of the adventures and be ok, or jump around between them, seemingly arbitrarily. Sure, each adventure has a suggested level range for players, but this can always be adjusted.

So let me ask you a question: What type of Dungeon Master are you?

The answer matters for this book, and your enjoyment of it. If you want to run pretty closely to the book, this won’t be for you. There’s too much conceptual space between adventures, the kind that necessitates improvisation and adding your own materials to flesh out a full campaign.

For me personally, this is great, because I struggle to run adventures as-is, or anything close to it. I’m much more likely to craft something that’s mostly homebrew, but has adventure bits spliced in from official supplements.

So for me, and DMs like me, these adventures are great, because it’s a lot to adapt and incorporate into a setting, but without mandating an overarching plot, and also leaving a lot of empty space between adventures in which to play (both figuratively and literally).

But I’ve also played with DMs for whom this would be a nightmare. So your mileage may vary. But the other reason I love it is because we haven’t seen this in 5th edition yet. Sure, the Yawning Portal book was sort of similar. But it didn’t create a consistent tone and environment in which to set a campaign.

One-shots on sites like the DM’s Guild are often explicitly designed to be inserted into larger campaigns, and to weave seamlessly into larger adventures that have nothing to do with the particulars of the one-shot. This is fine; we all need tangential breaks in our campaigning.

Saltmarsh does this, but it does so by giving each adventure the same tone and backdrop (nautical). So each is arguably more useful than a traditional one-shot that doesn’t have a clearly-defined sense of place.

I’ve lifted entire sections of 5e books into my homebrew adventures. This is largely how I use official adventure materials, because I’m rarely interested in the whole thing. Saltmarsh is thus a style of book tailor-made for this type of approach.

Of Ships & the Sea

The book compliments the modular adventures further with some frankly excellent sections on building and fleshing out nautical campaigns.

I wasn’t expecting much in these latter sections of the book: maybe a few random charts and rules for ship combat.

Instead, I could legitimately see some people buying the book for these sections alone. Among them:

The only letdown is the anaemic magic item section. Actually, calling it a section is too big a compliment. It’s ⅔ of a page. But whatever, the rest is great. 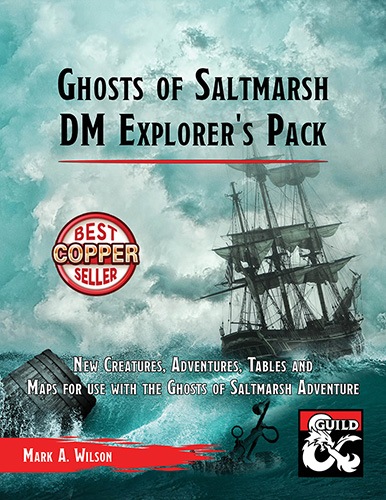 Want to make your Ghosts game even better? Check out my best-selling DM’s Guild supplement!

All battle maps (20 in total!) from GoS, for printout, Roll 20 and Fantasy Grounds, plus new random tables, creatures and other resources for DMs running aquatic adventures.

I really want more books like this one in 5th edition, but I think we’re unlikely to get them. Wizards of the Coast is making adventure books for every DM, which means that it’s a risk to produce adventures that are nothing more than loosely connected mini-adventures. They can’t bank on every DM being able to fill in the gaps, so a more explicit storyline has to be crafted.

That’s a shame, because it’s in the mixture of evocative book material, homebrew ideas, and reactionary improvisation with my group that the most magical moments happen. This is a book that allows for a LOT of that. And it fleshes out the adventures with the tools you’ll need to build around them.

So until this style of book becomes the norm, at least we have Ghosts of Saltmarsh. And if you’re looking to run a campaign at sea, it’s a worthy addition to your adventure collection.