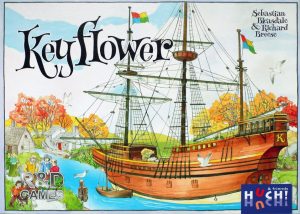 Keyflower plays out over four rounds (seasons). In each season, you’ll have a certain number of meeples, recruit more as the game goes along, then use these meeples to either bid on hexagonal tiles that will become part of your personal village, or to use the abilities on the tiles to build a resource engine that will culminate in a bunch of victory points.

The game involves bidding, worker placement, pickup and deliver mechanics, tile laying and tableau building, and resource management (both goods you’ll be accumulating and the meeples themselves). Despite this seemingly arbitrary blender of mechanics, Keyflower owes its success largely to how it merges these elements into a system that is more elegant than you’d suspect from its list of individual mechanics.

The tiles are kinda nifty, your little houses (which hide certain resources) are fun and thematic, and the resources themselves are functional but unremarkable. This game isn’t winning awards for art design, but everything matches well with the pastoral theme. There are also lots of chips, wooden bits, tiles, meeples, etc. to muck about with, for those that enjoy very tactile games.

This game lives and dies on the bidding phase – which can see wild swings in the tiles you can expect to receive – and your ability to utilize all options available to you, including those on others’ tableaus. The moment when you truly realize that your tiles aren’t your only available abilities is a wonderful moment, and it opens up a game where you’re trying to prioritize actions before others get to them, and picking the right color and/or number of meeples to block other players from using certain tile abilities.

The presence of mechanics like the green meeple – an ultra-rare color that gives you a lot of freedom in selecting tiles and blocking others – enhances this. Then, imagine that one player is amassing green meeples, then the boat tile comes out that allows you to ignore the color of meeple played, giving you more freedom in later rounds. Suddenly it’s a race for that tile. Moments like this exist throughout Keyflower.

And unlike Euros where there’s a communal game and a private game going on simultaneously, the latter usually on a personal player board, Keyflower has the super-communal game area (tile bidding) and the personal-but-still-communal villages you’re building. Everything is always in play for all players. I wish this wasn’t as revelatory as it is in Euro games, but it’s a refreshing change of pace from some games that are more insular.

The Aggressive but Forgiving Euro

Euro games with low interaction generally don’t hit with me. I get bored when I feel like I’m playing against a game’s internal systems rather than my fellow players. So I love Keyflower, because it packs a ton of this interaction beneath its Euro-style trappings.

I think the key, though, is that while the game can reward overt aggression, it’s never overly punitive. It’s what allows the more traditional Euro gamers to accept it. For example, say I just used your most powerful tile ability, and you’re a little frustrated. But as a result, those three meeples I just placed are going into your personal stash at the end of the turn, which will give you more options later in the game. Or you just stole the tile I was targeting, and I can’t outbid you. Unfortunate, but not the end of the world, because I can still use the ability once it’s in your tableau, and there’s likely an almost-as-good tile I can pivot to. Or I can simply stay put and take those meeples back at turn’s end, waiting for a later round with tiles I might want more.

There’s always a Plan B, is what I’m getting at, and there’s always a silver lining to an initial disappointment. So it rewards creative thinking and adaptation as much as long-term planning, both of which are part of most winning strategies.

There are two notable expansions, The Merchants and The Farmers. Having played with each a few times, I’m not sold on their value.

This is partially because I think there’s already enough going on in the base game that you don’t need these to enhance the experience. If this were a more regular pull for me, I might feel differently. But especially with newer players, there’s plenty to chew on in the base game.

However, the main reason I’m not a huge fan of these is that when I look at the core of Keyflower, the reason that I adore it, it’s the contentious and unique bidding and the fact that no one’s tableau is a truly personal tableau, but can be rented by anyone at the right moment. The game is a wolf in sheep’s clothing, and it’s this that draws me to it. The expansions don’t enhance this core, but rather simply add rules heft and components to surround it.

The expansions are generally well-regarded, though, so I suspect this praise is primarily from the game’s fans who enjoy it more for the engine-building aspects of the game, which become more varied and complex with the addition of either expansion. The Farmers is said to add breadth (more resources, etc.) to the game and The Merchants adding depth (more strategic pivot options, etc.).

Personally, if I’m only adding one, it’s the Merchants, but I owned both for a time and eventually got rid of both. Ultimately, if you want to determine whether or not you’ll enjoy them, you’ll want to ask yourself what you love about the base game.

Resource management with a pastoral, vaguely colonial theme is going to put some people to sleep. The presence of pigs, cows and merchant contracts in the expansions does nothing to escape this stigma.

It does a lot of things well together, but could be argued that it doesn’t do any single thing great. I’d argue that the specifics of tile bidding are still something of a novelty among games I’ve played, but it’s the confluence of mechanics that make Keyflower great, not any single element.

Over in the Recommendations forum of Board Game Geek, I’ve joked once or twice that if you want to play it safe, bloviate on various gaming elements for a bit like you know what you’re talking about, then just recommend Keyflower. The joke works because Keyflower shows up a ton on recommendation lists, because it can satisfy a large variety of interests without feeling like it’s sacrificing one element or another.

I’ve also found that it is a sneakily good bridge between gamers whose wheelhouse is intensely aggressive games and those who prefer the more cerebral, engine-builder Euros. It’s the rare game that might just create some common ground between such disparate gamer types, without feeling like a compromise for either.