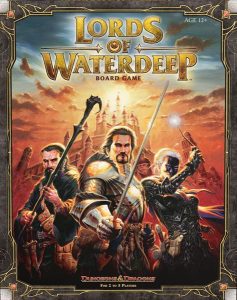 In the fantasy city of Waterdeep (in the Dungeons & Dragons IP) you’ll recruit adventurers to do your bidding (complete quests) in order to be the noble/ruler to gain the most influence (VPs). With limited exceptions, each player will start with a Lord (or Lady) who wants to complete two particular quest types – say, “Warfare” and “Commerce” quests – out of a possible five quest types. Each quest will gain them points, but these types will reward them with bonus points at the end.

Primary variants on the “place a meeple, get or do a thing” include Intrigue Cards, which you’ll acquire and are special action cards. You can place a meeple to play one of these, then place them again at the end of a round. The tradeoff here is that you’re usually sacrificing some momentum elsewhere to acquire the cards, and you’ll have last pick of space. You can also construct buildings from among a randomly drawn pool. These buildings produce extra places for your assigned workers, and the resources they bestow are usually unique or potentially even overpowered, often creating a war for them. Whoever builds the building will get a small bonus when it’s used by another player, thus incentivizing construction.

Outside of blocking spaces with your workers, there’s some possible “take that” in the form of Intrigue cards that can kill an opponent’s momentum. I’ve heard of some gamer groups removing these cards when they don’t enjoy direct conflict (I don’t mind them personally).

Why a Review
This game is very well-covered, but I’d like to review it in light of the robust worker placement world that has blossomed in board gaming since Waterdeep’s arrival. It certainly wasn’t the first of its kind, but the genre is inarguably more crowded.

I’m also going to present the case that further innovations haven’t always produced better results within the genre, and that there’s something to be said for the comparative purity of a game like Waterdeep.

The Components
There are a number of components here, and all are at least functional. The board art may look busy but is very readable and can be a cool addition for those who enjoy intricate city maps. The cubes that represent adventurers are perhaps the only lapse in thematic art or components. The boax and board art are highlights for me, and I’m a big fan.

This is one of the more “upgraded” games in the hobby, with options out there for elaborate box inserts, metal coins, and adventurer tokens that better represent them (so instead of “orange” you actually feel like you’re recruiting fighters/warriors). None are needed, but they exist for those interested.

To Theme or Not to Theme
One of the chief criticisms levied at Waterdeep is a lack of theme. Here, I have to reveal some possible bias: I’ve run numerous sessions of D&D in the city of Waterdeep, so I’m intimately familiar with its inhabitants, lore and locales. There’s ample flavor text on every quest card, and for someone who knows the lore, this text is often wildly thematic and/or darkly humorous. For those unfamiliar with the IP, however, it’s somewhat generic fantasy scribblings.

I’m surprised the card and board art doesn’t pull more people in, or the ability to inhabit the role of a Lord whose methods lead them toward certain quest types, but I won’t deny that if you don’t connect with the flavor text or setting, the game will likely be somewhat more dry.

Strategic or Tactical? Yes. Engine Builder? A Little
Long-term planning is absolutely possible in the form of buildings and/or “plot quests” that reward the player not with VPs, but with some benefit that will increase their momentum throughout the game and allow them to accumulate either more VPs or more actions. However, on a turn by turn basis, it’s a very tactical experience as you try to guess at which spaces won’t be available by the time it gets back to you again.

I use “momentum” to describe play, because I’m avoiding using the term “engine.” While miniature versions of what Euro-gamers describe as an engine exist in Waterdeep, your last turn is going to be pretty darn similar to your first couple turns. Sure, you’ll be scrambling to complete that last quest or two and will have an extra meeple to use, but you won’t have unlocked new abilities that change play meaningfully. That makes the game more of a tactical game of chicken where you try to be the last to leapfrog everyone on the VP track with your final quest turn-ins, avoiding the “take that” cards that will usually end up with whoever’s winning in the mid-game.

The Beauty of Directional Purpose
Waterdeep is not the most complicated worker placement game. It’s not the most innovative. It’s not the prettiest. It’s not the most thematic. For clarity, it doesn’t necessarily lack those things, but you can find other games that have surpassed it. So why its continued popularity? And why do I continue to enjoy it, play after play, years after having graduated from other well-respected gateway games?

Waterdeep never wavers in its purpose and experience, and remains strategically deep enough to reward numerous plays. But what do I mean by “never wavers in its purpose?” A more recent worker placement game might have separate actions taking place on your personal player board, or a secondary (or tertiary!) score track where you’re weighing the cost or benefits to prioritizing one track over another. This is fine, and can add depth, but it can also distract from the central experience if it’s not careful. If you like worker placement, I can’t imagine you not liking Lords of Waterdeep, because it delivers the choice and tension of the genre without anything that I’d consider extraneous.

Some will graduate from Waterdeep and not want to play it as much. This happened to me with others, like Ticket to Ride, which I enjoyed until I was just kind of done with it. Waterdeep has bucked that trend, and remains more than just a gateway for me, even as I’ve played and enjoyed worker placement games that have twists on the classic mechanics and/or more going on as a whole. Sometimes I just want good worker placement, without the bells and whistles of many other fine games. Waterdeep is a reliable vehicle for scratching that itch.

Scoundrels of Skullport Expansion
Perhaps because the base game is “enough” for me, I have a mixed relationship with this expansion.

There are two modules that can be added or left out (technically three, but the last is just stuff for a 6th player). The first just adds more stuff – buildings, quests, intrigue cards, etc. – as well as a new section of board with new places to place your meeples. The highest-point quests are bigger, but can also be more susceptible to player-blocking when, for example, you need a bunch of a particular resource.

The second adds more of the same, but more importantly adds a new Corruption mechanic that can end up giving you negative points. It’s a new risk/reward mechanic, basically, since actions involving corruption tend to confer slightly better benefits than others.

Let me first say that adding in these new quests, Intrigue cards and buildings is perfectly fine, and can actually add some new options without changing the complexity or play time, which is cool. The only caveat with that is that you’ll need to remove anything involving the Corruption tokens. But the expansion marks the cards that include the corruption mechanic, so it’s easy to remove them. These days, I keep the non-corruption stuff shuffled in with the base game at all times, and my games haven’t suffered for it. I think technically I may be doing something wrong by not removing some of the base game’s cards, but again, it hasn’t affected gameplay.

With the corruption elements, the risk/reward of doing deliciously evil things will appeal to many gamers. For players who enjoy Waterdeep as-is, it’s not going to revolutionize a ton, but for those to whom the game has gotten a bit stale, this will add new decisions and considerations and likely reinvigorate things. This module – as well as a 6th player – will also add time to your game. At max players, the base game is close to the limit of how lengthy I want my session to be. So I personally won’t use the corruption module unless we’re playing with 2-4.

Who Won’t Like This
The genre and traditional fantasy theme will not appeal to some for whom those simply aren’t their thing. And while I won’t use terms like lightweight or midweight to describe LoW or its competitors (I think those terms are largely broken due to the wild variance in how they’re applied in the hobby), there will indeed be gamers whose preferred level of complexity is higher than this. While I personally think this is heavier than most we call “gateway” games, it’s also lighter than many that have followed it.

The Verdict
Lords of Waterdeep is a perfectly representative example of a solid worker placement game, one that hides a surprising amount of strategic and tactical nuance, has accessible rules and an apparently hit-or-miss theme that will appeal to some.