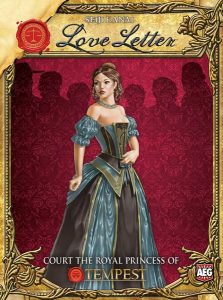 In Love Letter, you have a card. You draw another, then play it and resolve its ability, with the goal of eliminating opponents or lasting until the end of the round and having the highest-value card. First to win a certain number of rounds wins. Cards are numbered 1-9 and each has risks, rewards, benefits and considerations. This is a small game with a countable number of cards, so as cards get played, you get a sense of what’s left to be played against you (or what you can exploit in an opponent’s hand).

This has player elimination, but rounds are over in 1-3 minutes, so you hop back into the game in the next round with less downtime than many larger games that can feature individual player turns far longer than entire rounds of Love Letter.

For something that’s basically a microgame, the components are a surprising selling point. The felt bag is wonderfully thematic and the card art is excellent. I think the bag alone has sold numerous copies. It’s impossible for it not to stand out in a game shop among a bunch of games that blend into the crowd.

The Limits of Microgames, On Both Ends

Love Letter is a small, short game that’s largely dependent on card draws. However, it’s won praise because of how much subtle strategy is packed into it.

The first trick players will learn is card counting, which allows you to play the odds on a number of card plays. It won’t ensure victory, but it will increase your success rate on certain card plays by a noticeable percentage.

Next, for those who start to play enough, players will learn the bluff. Their opponents may also be counting cards at this point, so throwing them off the scent with a weird discard may be just the ticket. The double-bluff and iterative nonsense is not far behind.

Lastly, you’ll know all of this by heart and will be looking for a new angle to gameplay, and you’ll start to rifle through every possible card your opponents may have held onto instead of the one they played, and will start to ask which ones would be logical to keep, given their play(s) and how far into the round it is. This is by far the most nuanced skill, but it’s one that can often yield scarily accurate results when paired with the strategies above. So there’s a fair amount to think about in this simple structure (again, for a filler game).

But, on the flip side, sometimes you’ll just get a string of bad card draws (or your opponents will have good ones) and you and your attempts at strategy will be unceremoniously bumped from multiple rounds. You can strategize all you want, but there’s also a lot of randomness here.

Microgames and fillers trend toward random, and this one doesn’t entirely escape that. However, I can’t count the number of filler games I’ve played that have been more inane without enough hilarity or strategy to redeem them. Love Letter, thankfully, has reliable amount of the latter for the timespan it occupies.

I’ve played numerous reskins. Occasionally these are accompanied by minor rule tweaks, but usually it’s entirely cosmetic. I don’t really care about new skins, but you might. Nothing about any of the new themes seems to add anything to the gameplay, so it feels hollow to me.

Others are more ambitious, like Lovecraft Letter. I played this only once, so I can’t review it, but I remember enjoying it. But then, the amount it tries to add also takes it out of the niche the original game occupies, and I start to compare it to slightly meatier games. I play Love Letter for its simplicity, so while I’d likely enjoy Lovecraft on subsequent plays, I’m not itching to.

There’s also an expansion (or standalone?) that takes the game up to eight players. My few 8P games have been laboriously long. The extra length introduces problems that will never exist at 2-4 players. However, if you want to add in a new friend or relative for a 5-player game, it may help.

It’s short and kinda random at times, so hopefully you already know if it won’t be for you. The generic courtly setting also works well enough with the theme, but there’s a reason the game still works with numerous reskins…theme is not its strong suit.

The term “filler” is sometimes thought of as pejorative. But I have never thought of it as such. Games need to come in all shapes, sizes and lengths, and filling a gap between longer endeavors is a valid and noble use.

Love Letter is no longer my favorite filler, but it was my first favorite filler. I think it showed many people what a “filler” could really be: namely, something that did more than simply kill time but enhanced it every bit as much as a longer game might.

Love Letter belongs in a lot of collections simply because it does more with less than most on the market, even years after its release.

This remains the height of simplicity to teach and play, and despite having played it enough to have cooled somewhat on it personally, it remains in my collection due to both its universality and minimal size. It’s also my mom’s favorite game. She balks at anything that feels complex, since that starts to feel like work to her instead of fun, so I’m grateful for the game’s ability to delight her and others like her, while managing to still hold my attention after many plays.