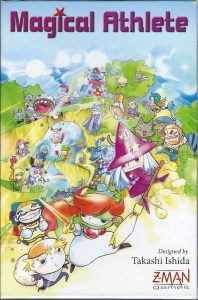 The game starts with a draft where you have a certain number of points with which to purchase your “racers,” characters with an ability that will be pitted against one another in a series of races worth an increasing number of points. The abilities are very asymmetrical. You’ll want to try to use your most powerful characters in the later races since those are worth more victory points, but everyone else will be doing that as well. Getting the most from your draft points is crucial, so you don’t want to overspend.

Movement in the races is literally just roll & move. This is generally modified quite heavily by the various powers and abilities in play, which can significantly alter the race depending on how they interact.

The character cards and little standees are…fine. The board that you draft and race on is almost comically plain. This is not an overproduced game and will not win anyone over on the beauty of its components.

Random is the Point

In some races, regardless of powers and abilities, if you simply roll well, you’ll probably win. Those 5’s and 6’s on the d6 are hard to make up for with abilities that are often powerful but very situational.

So why would you want to play this? The answer is that the times where those abilities do intersect to alter things are invariably comical. Over a full game, no one will have good or bad luck the entire time, so the interaction of character abilities really does matter. But, for example, say someone’s ability is predicated on them being on the same space as someone else. Maybe they keep landing on your space, and that will be frustrating and hilarious. Or maybe they’ll keep missing other players by 1-2 spaces, and that’s frustrating for them (and again hilarious). And if you have the worst round in the history of gaming, individual races are over in a few minutes, so you reload with your next racer with fresh hope.

Don’t get me wrong; there’s no real hidden depth here. This game is at best marginally strategic and is far from high art. The concept itself would be laughed out of any pitch meeting in any modern publishing house. You’re tossing things onto the board and hoping it works out in your favor. But watching it do so is an unexpected delight. And in a hobby increasingly concerned with iterating in clever ways on existing ideas or innovating in new directions, there’s something refreshing about absurd, random fun.

Strategy gamers, or those whose window into games are artwork and components. Also, if you can’t handle a lot of dice rolling, that’s most of what the gameplay entails.

Magical Athlete is the dumb kind of fun where you have to turn off your critical faculties to truly appreciate it. This also isn’t a game that gets pulled often.

But like, I do a 24hr. charity event each year (sadly, except during COVID lockdowns), and it’s a perennial pull at about 4am when our brains are mush and we just want to be entertained. For purposes such as that, Magical Athlete has few peers. Taken in pieces, its design seems outdated and it looks bland as hell, so it’s a case where you have to look underneath the surface to see what’s going on. I’d love to see this reprinted with a better board, more character options, and maybe some variant game modes. Until then, if you can find it, it may be worth a look.