Most Popular Board Games in the Modern Hobby Era

Most will agree that 1995’s Catan (then Settlers of Catan) kicked off what would come to be known as the modern era of board gaming. Certainly, it wasn’t the first of its type, and historical juggernauts like Cosmic Encounter, Dune, and (also 1995’s) El Grande still hold places of esteem in the hobby. However, if you’re looking for a consensus turning point from Risk and Monopoly to what we enjoy today, Catan is likely it.

With that in mind, I wanted to look at the most popular games in that era.

What This Is and Isn’t

This won’t include mass market games that dominated pre-Catan years as well. Frankly, if we just looked at sales figures, Hasbro would probably have eight or nine and we’d be staring at the same games we grew up with like Monopoly or Clue. Instead, this is specifically looking at “hobby games,” which is an admittedly arbitrary label but also not terribly difficult to define in practice.

I’m also excluding collectible card games and “lifestyle” games like Magic: The Gathering. Doing an apples to apples popularity comparison with those style of games is probably impossible, since the play and business model is wildly different.

I’m mostly using a mixture of copies sold (when I can find that data), total number of rankings on Board Game Geek (BGG, the internet’s hyper-thorough Wiki of gaming), and my own somewhat subjective judgement. I’m trying to be as comprehensive as possible, but with the knowledge that exactitude of any kind is going to be impossible. There are other games that could be included in the list below, so this isn’t definitive, but I believe several on the list are fairly uncontroversial regardless of criteria used.

I include this as one of the highest family- and kid-friendly games in modern gaming. Dixit has been published in over a dozen languages and as of 2015 boasts over 1.5 million copies sold.

Probably the most controversial pick on this list, TM has over 46K ratings on BGG, good enough for 16th on that list. Given its comparatively recent publishing date (it’s the most recent on this list) and its popularity among hobby gamers (it currently sits at the BGG #3 game of all-time), it’s the recent hobby game that best mixes breadth of ownership and critical acclaim. Presumably, its star is still rising in this regard, so it has a chance to enter the pantheon of popular modern games if it continues this trend.

One of the most ubiquitous modern “filler” games that can be played in 30 minutes or less, Love Letter is a staple of modern gaming. Its portability, ease of teaching and playing and light but satisfying strategy have put it in front of numerous gamers, as well as their non-gaming families and friends. With robust publishing support and numerous spinoff titles, it’s unlikely that its popularity will ebb any time soon.

Codenames took over in 2015 in unexpectedly dominant fashion. Gamers were binging it with their gaming friends, then taking it home for the holidays to play with family. Since its release, it’s likely that no other game has been played as much at gaming cafes, meetups and gaming conventions around the world.

I’m always surprised when I remember that 7 Wonders was released in 2010. It feels like a modern institution in gaming, alongside those that were published roughly a decade before it. However, at over a million copies sold – with another half million going to its popular spin-off, 7 Wonders: Duel – it’s earning its place among those older standards.

Dominion is responsible for popularizing a genre (deck building) in ways that continue to be felt. But this isn’t a list about historical influence. However, Dominion and its many expansions can claim over 2.5 million units sold, so it remains both an original influence and an ongoing presence in games.

As of 2014, over 3 million copies have been sold, and that’s just the base game and doesn’t include the last five years. Ticket and its many popular spinoffs are an empire.

I couldn’t find sales stats for this one, but along with Ticket to Ride and the games at #2 and #1, Pandemic could rightly be called an empire of games. The Pandemic franchise now includes numerous popular titles, and this flagship game is still among the most well-regarded and frequently played in the hobby.

I think there will eventually be a case for this at #1. The number of owners, ratings, plays and the strength of its ratings on BGG is nearing that of Catan. It’s apparently aged slightly better in the eyes of many, and that may give it the longevity needed to climb further. I also suspect the 6+ million copies sold listed on its website is dated, but even if it’s not, that’s enough to put it comfortably above any but our #1.

Nothing else belongs here at the moment. At 18 million copies sold and still carrying the flag as the standard bearer for modern gaming, Catan stands alone, for now at least. 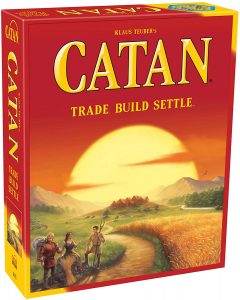 There will be well-qualified games left off of any such list. Among others I inevitably forgot about, here are some that just missed my cut: